Lawyers, human rights activists and political analysts say that allowing more than one bar in a city will mean splitting lawyers along political lines. With political polarisation so rife in Turkey, such splits seem inevitable. Judges and public prosecutors will also know which bar association a lawyer is from as lawyers' bar associations are written in judicial correspondences. Lawyers say this will damage judicial impartiality. 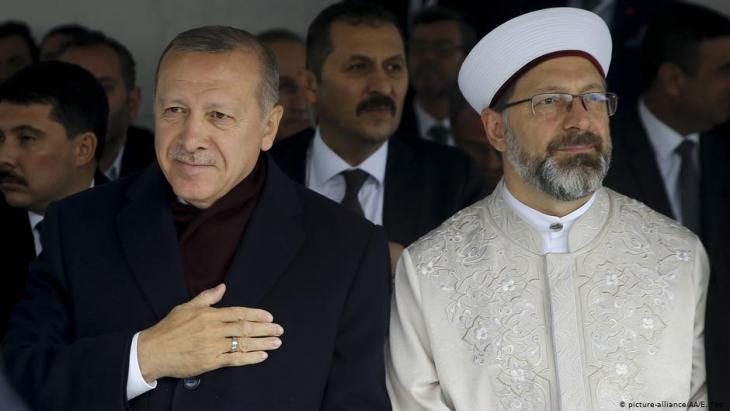 Turkish President Recep Tayyip Erdoğan (left) and Ali Erbaş, the head of Turkey's Directorate of Religious Affairs (Diyanet): according to Ayşe Karabat, President Erdoğan called for a law to regulate bar associations after the Ankara Bar Association condemned Erbaş for saying that homosexuality was the "cause of illnesses" and that it "withers generations". "The Ankara Bar Association claimed that Erbaş incited hatred, while Erdoğan said the bar was insulting Islam," writes Karabat

Concern outside Turkey too

In a Facebook post, Dunja Mijatović, the commissioner for human rights of the Council of Europe, argued that these amendments cannot be isolated from the rule of law crisis in the country, also documented in her most recent report on Turkey, raising concerns that such a move will "further damage the appearance of impartiality within the justice system."

A similar view came from Róisín Pillay, director of Advocates for Justice and Human Rights' Europe and Central Asia programme, who underlined that this bill "will only deepen mistrust in Turkey's justice system as lacking independence by dividing the legal profession along political lines."

It has been reported that during the preparations for the bill, there had been concerns among AKP and MHP officials about permitting lawyers to group in bars according to their political leanings. But when these concerns were raised, they were firmly rebuffed by President Recep Tayyip Erdoğan, who wanted to go ahead with the plan.

"Let multiple bars be established to show everyone's true face. Let it be clear that there is a [outlawed separatist Kurdistan Workers' Party] PKK bar association that looks like a CHP bar; let there be a PKK bar that looks like one," pro-government Hurriyet daily writer Abdulkadir Selvi had said in a recent column. 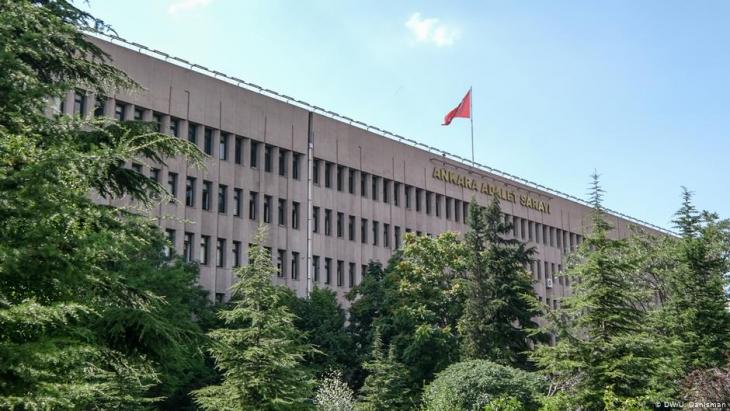 Dunja Mijatović, the commissioner for human rights of the Council of Europe, links the recent reforms in Turkey to the rule of law crisis in the country. She says that the law will "further damage the appearance of impartiality within the justice system." Pictured here: the Palace of Justice, Ankara

The government claims that the new law will make bar associations more democratic and pluralistic since it will increase the representation of the provincial bar associations in the Union of Turkish Bars (TBB), a key umbrella organisation that controls and distributes significant financial resources to provincial bars to cover legal aid services.

Before the amendments, each province would send three delegates and then one for every 300 members of a bar association. But after the amendments, all bars, including the newly established ones, will be allowed to send four delegates to the union, and then one delegate more for every 5,000 members. As a result, the smallest bars will gain much greater power than they used to have and will exercise greater influence over the activities of the union.

Under these new regulations, a provincial bar with fewer than 100 lawyers will have four delegates at the TBB, but Istanbul, with 47,000 lawyers, will be represented by 12 lawyers instead of the current 153.

Similarly, the Ankara and İzmir bar associations, which act as human rights watchdogs with commissions that focus on marginalised groups, will lose power too.

All this comes after a statement made by the Ankara Bar Association condemning Ali Erbaş, the head of Turkey's Directorate of Religious Affairs (Diyanet), for saying that homosexuality was the "cause of illnesses" and that it "withers generations". The Ankara Bar Association claimed that Erbaş incited hatred, while Erdoğan said the bar was insulting Islam. It was then that Erdoğan called for a law to regulate bar associations.

"This is very obviously another effort by the government to divide and weaken the structures that they don't control. The AKP government did this to many other institutions," said Ruşen Çakır, the editor-in-chief of the independent news site Medyascope.

This verbal skirmish is only one of the many clashes between the two political camps in Turkey. But what is certain is that lawyers have lost their powers.

All eyes are now on the Constitutional Court. However, until it announces a ruling, new bar associations can be set up, with some preparations already underway, and it will not reverse the division among lawyers.

A broad U.S.-led effort to hold the Chinese government to international account for its abuses of largely Muslim Uighurs in Xinjiang would, at the very least, remind China that ... END_OF_DOCUMENT_TOKEN_TO_BE_REPLACED

The outpouring of solidarity worldwide following the violent death of George Floyd should prompt us to step back and fundamentally question racist structures and privileges based ... END_OF_DOCUMENT_TOKEN_TO_BE_REPLACED

The recent murder of Turkish student Pinar Gültekin by her ex-boyfriend has sparked outrage in Turkey. Women's rights activists are calling for the government to tackle the ... END_OF_DOCUMENT_TOKEN_TO_BE_REPLACED

The photos of the first Friday prayers in Hagia Sofia in 86 years triggered passionate and diverse responses around the world. Surrounded by a coterie of ministers, Turkey's ... END_OF_DOCUMENT_TOKEN_TO_BE_REPLACED

END_OF_DOCUMENT_TOKEN_TO_BE_REPLACED
Social media
and networks
Subscribe to our
newsletter