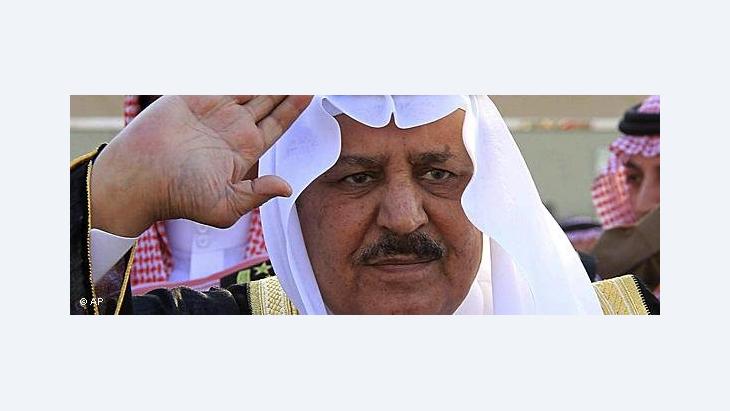 ﻿Saudi Arabia's King Abdullah has named Naif bin Abdelaziz, 77, as crown prince and deputy prime minister, a choice that raises concerns about the direction in which the conservative prince will take the kingdom. By Mai Yamani

The contrast between the deaths, within two days of each other, of Libya's Col. Muammar el-Qaddafi and Saudi Crown Prince Sultan bin Abdel Aziz is one of terminal buffoonery versus decadent gerontocracy. And their demise is likely to lead to very different outcomes: liberation for the Libyans and stagnation for the Saudis.

But the death of Sultan, at 86, marks the beginning of a critical period of domestic and foreign uncertainty for the Kingdom. After all, Sultan's half-brother, King Abdullah, 87, is still hospitalized in Riyadh, following a major operation last month. The regime is aging and ailing, and is perceived by the population as being on life support.

Sultan's death is the first time that the burial of a Saudi royal has been delayed to give the ruling family time to decide on the next in line – a sign of internal discord (and concord on the continuation of dynastic rule).

Factional clashes within the Saud dynasty

The Saudi regime's stability now depends on its ability to maintain unity and establish clarity in its system of succession. With the Crown Prince's death, schisms are particularly threatening to the Kingdom's stability (and that of oil exports), because the ruling Al Saud have swelled to 22,000 members, which has given rise to factional clashes among increasingly numerous claimants to power. 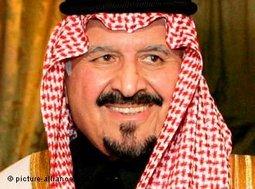 Crown Prince Sultan, who was defence minister, died in New York on 22 October aged 80 after a long illness

​​Sultan had already been dead – politically, that is – for the last three years; indeed, since June 2011, when he left for New York for medical treatment, young Saudis speculated on numerous Web sites that this was also literally the case.

Abdullah's octogenarian line of successors recalls the final years of the Soviet Union, when one infirm leader after another succeeded to power for a brief period of inert rule. Many Saudi subjects feel the same pattern of continuous uncertainty and torpor.

Making matters worse, the rule of succession is ambiguous. After Abdullah succeeded his brother Fahd, who ruled for 23 years until his death in 2005, he created an Allegiance Council, an ambiguous and mysterious family body that resembled the Vatican's College of Cardinals. But here, restrictions are not based entirely on age, but on family bloodlines. The Council included the surviving royal princes of the 43 sons of Ibn Saud, the Kingdom's founder, and the sons of their deceased brothers – for example, the late King Faisal's brood.

But, as Sultan's health deteriorated, Abdullah bypassed his own creation and appointed Prince Naif, the interior minister, as a second deputy. And now, Naif is being anointed Crown Prince. But, befitting this increasingly exsanguinous imperium, Naif, is known to suffer from leukaemia.

Sultan's fortune is estimated at $270 billion, which he distributed between his sons prior to his death in order to shore up their political position in the competitive princely arena. The reality is that every senior prince has placed his favorite sons in important positions in the Kingdom.

Sultan secured the defense ministry for his son Khaled, and brought back Khaled's notorious brother, Bandar to head the Intelligence Security Council. Abdullah guaranteed his son Mitaeb's position as head of the National Guard. The new Crown Prince, Naif, has established his son Mohammed as the next interior minister.

In short, despite Abdullah's innovations in the succession process, it is an open secret that nothing guarantees a transition to a younger generation of leaders – or that an effective ruler will emerge. The story of the Al Saud's succession struggle is no longer whispered behind closed doors. The Internet has opened a window on all of the royal family's plots, ambitions, and double-dealings. 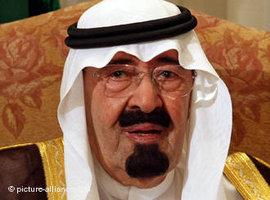 "King Abdullah at least talked about reform, Prince Naif can barely bring himself to utter the word," writes Mai Yamani

​​The Al Saud resembles a family business, established in 1932. Ibn Saud managed to conquer and unite the vast territory of the Arabian Peninsula, give it his family name, and alienate, divide, and control his cousins and brothers in order to establish a clear and undisputed line of succession through his sons. After Ibn Saud's death, his sons, though never entirely united, maintained enough coherence to keep the store running. That is no longer true of the thousands of princes that they produced. As the older generation dies off, the new generation has fallen to fighting in front of the customers.

Indeed, with the ratio of royals to commoners now at one to a thousand (compared to one to five million in the United Kingdom), the challenge of managing princely privileges, salaries, and demand for jobs has never been more intense. Royal perks include lifetime sinecures and domination of the civil service, which enable the princes to award contracts and receive commissions on top of their salaries.

So the Saudi regime is divided, its legitimacy is questioned, and sectarian tensions are growing. Moreover, while oil-export revenue is booming, the neighbourhood is in revolutionary flames.

In the short term, the iron-fisted Naif, as Crown Prince, will push the Kingdom into greater repression, in part by strengthening the hardline Wahhabi clerics' place in the country's power nexus. Magnificent sums of money, backed by Wahhabi dogma, will be deployed to ensure popular submission and silence. Whereas Abdullah at least talked about reform (though with no real consequences), Naif can barely bring himself to utter the word.

Denial remains the Saudi rulers' dominant mindset. The royals believe that custodianship of Islam's holy places gives them a special status in the Arab world, and that no revolution can touch them. And, if anyone tries, they will follow Naif's counsel: "What we took by the sword we will hold by the sword."

Throughout the region, newly mobilized (and thus empowered) Arab youth are trying to move their countries towards reform and liberalization. Saudi Arabia, unfortunately, is moving in the opposite direction.

Nouara may be 65, but she is ready to join thousands of others who burn their ID and pay traffickers for the chance of a new life in Europe. Zineb Bettayeb reports END_OF_DOCUMENT_TOKEN_TO_BE_REPLACED

In Doha, Arabs from Morocco, Tunisia, Egypt and Algeria are gathering to celebrate the first ever FIFA World Cup to be held on Arab soil. The criticism from Europe? Over the top, ... END_OF_DOCUMENT_TOKEN_TO_BE_REPLACED

"Rebel Game: The Power of Football in the Middle East and the Qatar World Cup", an anthology published by Middle East researchers Jan Busse and Rene Wildangel, takes the upcoming ... END_OF_DOCUMENT_TOKEN_TO_BE_REPLACED

After a two-year hiatus, the Arab League re-convened at the beginning of November in Algiers against a backdrop of uncertainty and discord. By Pierre Boussel END_OF_DOCUMENT_TOKEN_TO_BE_REPLACED

The history of Jews and Muslims is far more entangled than you might imagine – but you have to listen out for it. In "Recording History", Christopher Silver takes us on a sonic ... END_OF_DOCUMENT_TOKEN_TO_BE_REPLACED

Welcome to the world of Al Qasar, where Arabic music collides head-on with punk and psychedelic to create something powerful and beautiful. "Who Are We" is a raucous, subversive ... END_OF_DOCUMENT_TOKEN_TO_BE_REPLACED
Author:
Mai Yamani
Date:
Mail:
Send via mail

END_OF_DOCUMENT_TOKEN_TO_BE_REPLACED
Social media
and networks
Subscribe to our
newsletter