A group made up of Israelis and Palestinians has some unusual ideas on how to resolve the Middle East conflict. It′s a peace initiative based on the notion that no side should lose. By Inge Gunther

The Ana Lu-Lu Bar slowly fills up. Tucked away up an alley in the old city of Jaffa, the Arab twin city of Tel Aviv, it is an insider tip for night owls, eccentric characters and the alternative subculture. The topic of this evening, however, is also attracting a more mature clientele, not to mention conservatively-dressed youngsters wearing crocheted yarmulkes.

A neon heart blinks on the exposed brick wall, while colourful lightbulbs dangle over the counter. The space where the music is usually mixed is occupied by two old-timers, both in their mid-fifties in shirtsleeves, busy testing the microphone. One is an Israeli and the other a Palestinian from the West Bank. What has brought them together is a peace initiative that sounds astonishingly simple and that aims to be fair to both peoples.

They call it "Two States, One Homeland" and it based on the notion that no side should lose and no one should have to give up too much. Jewish settlers would be permitted, should they wish, to live as permanent residents in a Palestinian state. A proportional number of Palestinian refugees would be granted the right to live in Israel according to a determined quota. Both groups, however, would remain citizens of their own respective states, whose government they would elect. The situation could be compared to that of Germans living in France or Spain.

Meron Rapoport refers to the concept of "Two States plus" as one of "pragmatic utopianism." He is an Israeli journalist, who works in Israeli educational television. His political partner comes from Bethlehem. Auni al-Mashini, a political scientist, who as a young Palestinian spent years in Israeli prison, expresses it somewhat differently. He calls the idea "Two States, One Homeland," a combination that allows "both sides to win." 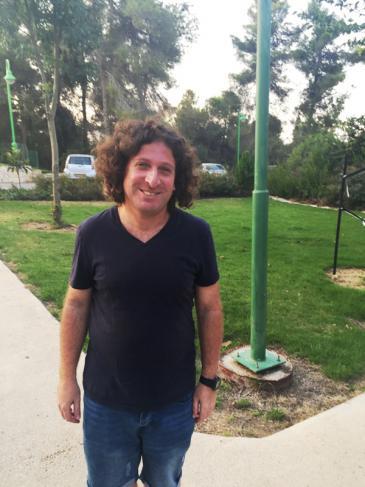 Israeli peace activist Elias Cohen: "This land is a single entity. But every nation has the need to live independently. We are committed to each other. And we do not want to think in categories that hurt the other side"

The crowd in Ana Lu-Lu listens spellbound to the discussion. They like the idea of a peace settlement that does not entail any forcible evictions from settlements. "We Palestinians are in favour of anything that would end the occupation," says Mashni. This statement is also well received by the public. "Finally some fresh ideas," says Omer Krieger, an artist from Tel Aviv. "Two states with open borders that respect national identities and the right of self-determination is something we can live with.

Every nation has the need to live independently

This model, however, is not in tune with any of the current political programmes of the established parties. Although the left-leaning Labour Party is in favour of a two-state solution, it does so out of the need for a clear separation. We are here, they are there. The nationalist, right-wing camp, by contrast, calls for the annexation of "Judea and Samaria," the Biblical terms for the hilly region west of the Jordan River. According to this position, the Palestinian population should be satisfied with their autonomous zones. Prime Minister Benjamin Netanyahu, in turn, professes his support for a two-state solution, but one tied with a big condition. There should be no eviction of settlements, as he considers this to be the equivalent of ethnic cleansing. And, by no means, should there be any equal partnership with the Palestinians.

Nonetheless, there exists a minority among the Jewish settlers, who regard their Arab neighbours as equals. One of these is Elias Cohen. The 44-year-old poet lives with his family in a pretty home in the Kfar Zion settlement south of Bethlehem. He says, "I always had a soft spot for socialism and I understood from a very early age that we had to share this land with the Palestinians."

Ten years ago, following the Israeli withdrawal from Gaza, he met Meron Rapoport. Cohen, the left-wing exotic among the settlers and the leftist journalist from Tel Aviv joined together and, as the result of many discussions, developed the model of "two states, one homeland." In 2013, the first meeting with a similar-minded Palestinian took place. Since then, their ideas have been gaining ground, spread through living room debates and hundreds of events held in community centres, clubs and bars.

Cohen explains the basic ideas as follows: "This land is a single entity" – whether Eretz Israel or Palestine, historically speaking, both refer to the same region. "But every nation has the need to live independently. We are committed to each other. And we do not want to think in categories that hurt the other side."

At the beginning of last June, this unusual alliance of Palestinian offbeat thinkers, Israeli peace activists, settlers and ultra-orthodox Jews presented their ideas to the public at a conference at the Tel Aviv Convention Centre. "We are no longer just an initiative, we are already a movement," says Cohen, today self-assured. To date, they have kept their distance from established politics. Even when Israeli President Reuven Rivlin – an advocate of equal rights for Jews and Palestinians in some sort of confederation – "sometimes sounds similar to our initiative," says Elias Cohen. 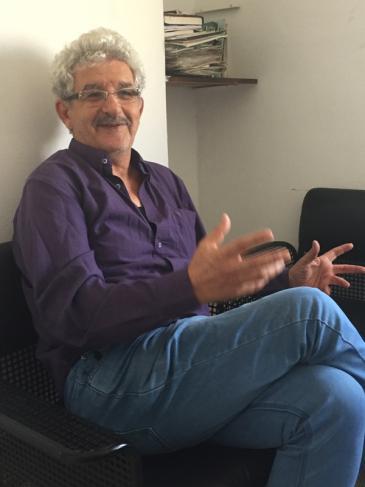 Mohamad al-Beiruti, former Fatah member, can very well understand that settlers, who have lived in the West Bank for decades and feel rooted there, do not want to move away. "And they shouldn't have to," he adds. The ″Two States, One Homeland″ initiative foresees residency rights for the respective minorities in the two-state solution. If five percent of the Palestinian population want to be settlers, then Israel should allow a similar number of Palestinian refugees into the country

Mainstream society, however, has reacted sceptically to the initiative, Palestinians even more so than Israelis. When the ideas were presented in Ramallah, they were first met with a response of disbelief: "Are the Israelis ready to accept this?" After all of the disappointments following the Oslo peace process, many Palestinians find it difficult to imagine that real concessions could ever come about, especially those that would allow a partial return of Palestinian refugees to the homeland of their ancestors, present-day Israel.

It is precisely this point of the concept that Mohamed al-Beiruti, 59, finds praiseworthy. He is a refugee himself and, as a member of Fatah, spent years in Israeli prison and then in exile. In 1948, his parents were driven out of their village of Sumeil. His family had owned hectares of land on the coastal plain, which is now populated by Israelis. "As far as I am concerned, they can all stay," says al-Beiruti, drinking Arabic coffee in his small office in Ramallah. But he would also like to build something of his own on the ruins of his forefathers' land.

He can very well understand that settlers, who have lived in the West Bank for decades and feel rooted there, do not want to move away. "And they shouldn't have to," believes al-Beiruti, "but they do have to respect Palestinian law."

It is difficult, of course, to equate the lot of settlers, who put down roots in the occupied territories following the Six Day War of 1967, with that of refugees, who fled or were driven from their villages during the Israeli War of Independence in 1948. On the other hand, there is no perfect solution to the Middle East conflict. "Our attempt is to resolve past injustices without causing any new injustices," says Rapoport. For Schira, a 28-year-old member of the public in the Ana Lulu-Bar, it all sounds too simplistic. And perhaps it is.

Yet, similar plans have long-since worked in other areas of the world, says Rapoport and points to Bosnia, Ireland and the European Union.

Palestine is disappearing. From the international agenda, from the map, as a concept. The filmmaker Elia Suleiman from Nazareth reacts in the only possible way: using the language ... END_OF_DOCUMENT_TOKEN_TO_BE_REPLACED

As we digest the details of Donald Trump's Vision for Peace, we need to ask ourselves just one question: does this draft guarantee an Israeli and a Palestinian baby born today ... END_OF_DOCUMENT_TOKEN_TO_BE_REPLACED

As expected the Trump administration released its Israeli-Palestinian peace blueprint on Tuesday, a plan that ignores the Palestinians at the expense of lasting peace. Middle East ... END_OF_DOCUMENT_TOKEN_TO_BE_REPLACED

Beyond the latest crisis with Iran, current U.S. Middle East policy is nothing if not chaotic. Many fear that the Trumpian approach could irreparably damage future U.S. ... END_OF_DOCUMENT_TOKEN_TO_BE_REPLACED

At the suggestion of his Arab students, Israeli psychologist Ofer Grosbard created the project "Quranet", which uses texts from the Koran to solve educational problems in schools ... END_OF_DOCUMENT_TOKEN_TO_BE_REPLACED

Contemporary artist Mona Hatoum is one of those figures whose presence in western capitals stimulates much attention and critical writing, while her exhibitions in Arab cities ... END_OF_DOCUMENT_TOKEN_TO_BE_REPLACED
Author:
Inge Günther
Date:
Mail:
Send via mail

END_OF_DOCUMENT_TOKEN_TO_BE_REPLACED
Social media
and networks
Subscribe to our
newsletter