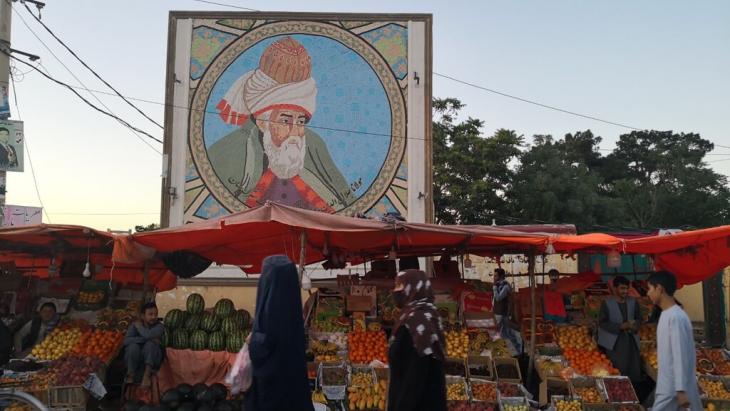 For the first time ever, a complete edition of Rumi's "Masnavi" has been published in German in verse. At the Sufi Festival in Hamburg in late November, Marian Brehmer met translator Otto Hoeschle and spoke to him about the significance of this masterpiece of Islamic mysticism

It's no accident Jalaluddin Rumi's thirteenth-century Masnavi is often referred to as the "Koran in Persian". Indeed, after the Koran, the Masnavi is probably the work that has had the most lasting impact on the thinking and above all the inner world of emotions and experience of Muslims on the spiritual path. From the Balkans in the West to Southern Asia in the East, it has served – and continues to serve – as an anchor and a source of knowledge in the lives of those searching for meaning.

Mystical orders – and in particular the Turkish Mevlevi Order – used the Masnavi as a textbook for training adepts. It became the medium through which Rumi the master (1207–1273) worked even centuries after his death, its refreshing vibrancy guiding people into the depths of their beings.

One Iranian Masnavi scholar, who has taught from the book for decades and studied it from beginning to end dozens of times, says there is no question on the spiritual path that the Masnavi leaves unanswered.

But the Masnavi is also a piece of world literature, embedded in what is probably the richest spiritual lyrical tradition in the history of humanity, namely Persian Sufi poetry. While Rumi's poetry has enjoyed widespread popularity in the United States for years now, people in Germany have yet to really warm to the poet.

On the other side of the pond, Rumi's works have even made it onto bestseller lists – pop icon Beyonce called one of her twin daughters Rumi – even though these volumes are often based on simplified or partly falsified versions (not on translations!) and lack a true understanding of the historical, theological and ideological context of Rumi's teachings. 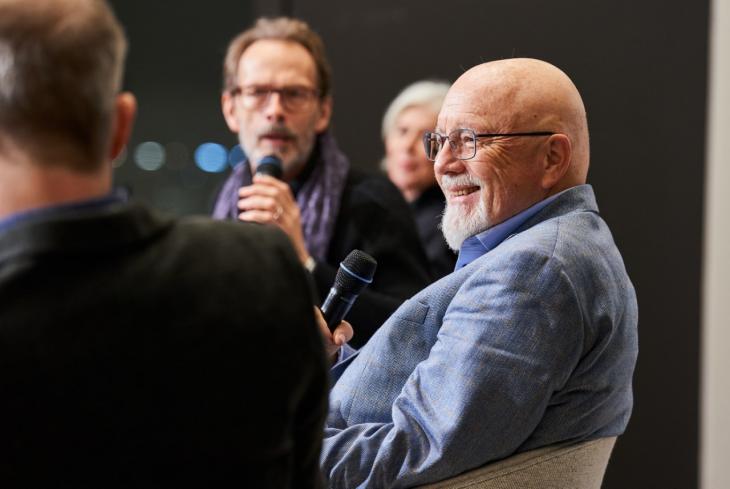 Discussing Rumi at the Sufi Festival in Hamburg's Elbphilharmonie: next year marks the 750th anniversary of the death of the famous Sufi poet. At a panel discussion as part of the Sufi Festival, Otto Hoeschle, translator of the "Masnawi" (in focus in the picture) discussed how Rumi has become a contemporary popular icon with Islamic scholar and Sufi expert Stefan Weidner. What makes Rumi's verses so captivating, far beyond Sufi circles? Do we even understand him correctly, or are we in the West only scratching the surface?

In the German-speaking world, the renowned scholar of Islamic studies Annemarie Schimmel (1922–2003), was the first person to open up parts of Rumi's oeuvre to a wider readership. Schimmel's German translation of Fihi ma fihi (Rumi: Von Allem und vom Einen) was published in 1988. She also translated parts of the Masnavi and Divan i Shams into German. In the early twenty-first century, a German prose version of the Masnavi was published. Now, however, a six-volume edition entirely in verse form has been released for the first time.

The translator of this complete edition is the German-speaking Swiss Otto Hoeschle, who studied German and English at university and spent years working for the Red Cross in Arab countries and in Iran and Afghanistan, where he learned to speak Arabic and Persian. At a panel event at the Sufi Festival in Hamburg's Elbphilharmonie – a four-day event of concerts, exhibitions, and discussions focusing on the subject of mystic Islam – Hoeschle told of his work on this multi-layered text.

Rumi at the Elbphilharmonie

"Schimmel rhymed in her translations of parts of the Masnavi, but also falsified the text in the process. Because I used rhymeless blank verse, I was able to work more accurately," said Hoeschle. The event also included the reading of a lyrical poem to the attentive audience, which had made its way to Hamburg for an evening devoted entirely to Rumi.

When the host asked Hoeschle whether he himself had ever had a mystical experience, Hoeschle described a personal experience of conversion relating to Nicholas of Flue, the patron saint of Switzerland, in the canton of Obwalden, where Hoeschle has lived since the early 1960s.

In fact, the question of experience, which might have surprised some in the audience, is absolutely key to Rumi: a work such as the Masnavi cannot simply be understood from a purely academic, supposedly objective perspective, but requires a certain degree of spiritual exploration and empirical life maturity, ideally combined with spiritual practice. Or, as Rumi puts in the eighteenth verse of the first book: "The raw cannot comprehend the ripe, so I will be brief. – Salam!"

Motivated by his own spiritual search, Hoeschle began reading Islamic Studies in the 1990s and studied the teachings of the Sufis. In doing so, he discovered parallels with the Christian mystics, such as Meister Eckhart. It was around about this time that Hoeschle began translating individual poems by Rumi, Hafez and Attar into German. "Nothing brings you closer to poetry than the process of translation," Hoeschle said. 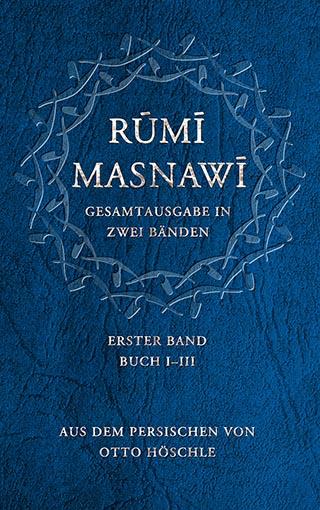 As time passed, Hoeschle dreamed of translating the Masnavi. Initially, however, he was put off by the difficulties of the poetic language and the challenges posed by Farsi, for example the ambivalence of the third-person Persian pronoun ("û"), which can – depending on the context – refer to a male or female being, or the numerous wordplays and the instances of finesse that are almost impossible to render in German.

The translation and publication of a two-volume Masnavi edition of 25,000 verses over 1,500 pages is a remarkable publishing achievement that can only be born of a firm conviction of the significance of this work.

The project was taken on by Chalice Verlag, a company that for almost 30 years has rendered a huge service to German-speaking readers, publishing spiritual literature that does not make a huge splash but is all the richer in terms of its substance. These are the projects major publishers are reluctant to accept because they lack both the publishing courage and the necessary expertise.

Chalice Verlag, founded in 1994 and based in the town of Xanten in north-western Germany, has set itself the task of "offering spiritual literature of substance to wayfarers searching for meaning in our materialistically rooted world to sustain them on their journey."

It focuses on new translations of works from the comprehensive oeuvre of the Andalusian mystic Muhyiddin Ibn Arabi, works by contemporary teachers of wisdom such as John G. Bennett und Reshad Field, as well as new editions of books by Annemarie Schimmel, not to mention Christian mysticism.

It is all the more gratifying that the magnum opus of Rumi, who like all mystics was simultaneously ahead of his time and timeless, has found a home in a publishing company that has set itself against the zeitgeist – against that sense of doom that has descended on many publishing companies in the face of digitalisation, the COVID-19 pandemic and increased publishing costs.

Hoeschle's translation of this "mystagogical didactic poem" – as he aptly describes it in his introduction – is fluid, even though the use of poetically old language in some parts makes considerable demands on the reader's concentration, and is evidence of his in-depth study of the subject matter of the text.

Of course every translation is a matter of interpretation, whereby the deeper dimension is only revealed in a contemplation of the verses. Another challenge is Rumi's associative narrative style, which repeatedly leads readers off on tangents, boldly challenging them to abandon their limited, linear sense of reason.

It is to be hoped that the work, published in two volumes in 2020 and 2021, will reach a broad readership. According to Hoeschle, the Masnavi also has the potential to entertain and educate a German-speaking readership in the twenty-first century, regardless of whether the reader is open to the spiritual or not – just like Fariduddin Attar's Conference of the Birds, a much more slender volume that served Rumi as a template for the Masnavi and which has also been translated by Hoeschle.

Seeing people in everyday life in a new way

Hoeschle says that people could discover in these two works "how modern some of the things the poets lay out in front of us really are: the perpetual situation of humans in the world, their existential thrownness in a life marked by suffering and their yearning for a better world." He goes on to say that "to open oneself to the world view of these poets and, consequently, of the Sufis, also means seeing people in everyday life in a new way, putting oneself in an empathic relationship with them."

In Hoeschle's eyes, the key to this lies in the reader identifying with the numerous characters in the book: "Rumi's countless anecdotes, events from everyday life are on the one hand amusing and on the other pitiful, but are always so touching that we see ourselves in them. And we sense that humans have at heart always remained the same down through the ages and in all four corners of the earth. In this way, Rumi's work can – when read in the right way – contribute to international understanding."

Home
Print
Newsletter
More on this topic
God's love for all: Sufism is not just MuslimThe hidden treasures of Sufism: In the footsteps of RumiAttar’s "The Conference of the Birds": There is no person whose soul has not suffered
Related Topics
Book reviews, Iranian literature, Mysticism | Sufism, Translation
All Topics

Giessen, Eichsfeld, Kusel, Berlin – cars bearing old German number plates are the latest trend on the streets of Cairo. Many Egyptians regard the discarded plates as chic. What ... END_OF_DOCUMENT_TOKEN_TO_BE_REPLACED

Tunisia has been going through a severe economic and political crisis in recent years. More than one in three young people there are unemployed. For many skilled, qualified and ... END_OF_DOCUMENT_TOKEN_TO_BE_REPLACED

German imams have publicly expressed their solidarity with the women of Afghanistan. In a letter of protest, the clerics say that the Taliban regime's decree barring women from ... END_OF_DOCUMENT_TOKEN_TO_BE_REPLACED

At the end of every year, the team at Qantara.de gives you a run-down of the ten most-read articles on the site over the past 12 months. Here is a quick overview of the stories ... END_OF_DOCUMENT_TOKEN_TO_BE_REPLACED

Social engagement is often motivated by religious factors. A new book explores the background to these community efforts and appraises how effective they are in helping to ... END_OF_DOCUMENT_TOKEN_TO_BE_REPLACED

The government in the Netherlands, one of the last European nations to abolish slavery, has made an historic apology. But some feel that there is still a long way to go. By Ella ... END_OF_DOCUMENT_TOKEN_TO_BE_REPLACED
Author:
Marian Brehmer
Date:
Mail:
Send via mail

END_OF_DOCUMENT_TOKEN_TO_BE_REPLACED
Social media
and networks
Subscribe to our
newsletter