New round of Iran nuclear negotiations begins in Vienna 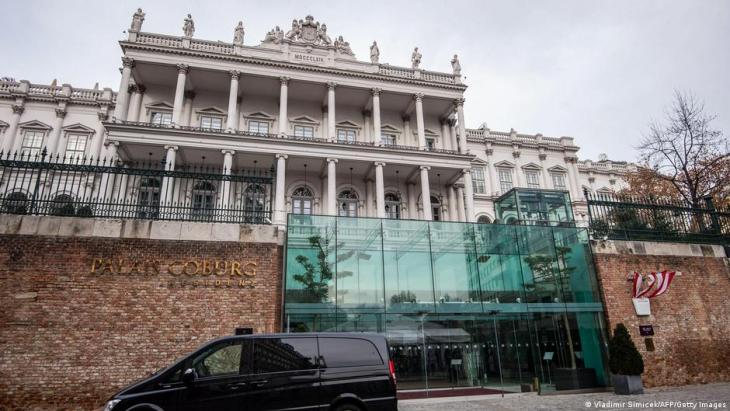 Iran has marked the resumption of negotiations in Vienna on its nuclear programme with a demand for the lifting of international sanctions.

"The minimum goal of this round of negotiations should be to return Iranian oil exports to normal and grant access to oil funds in foreign banks," Foreign Minister Hussein Amir-Abdollahian said in Tehran on Monday.

The oil and banking sanctions against Iran have taken away the country's most important source of income, leaving Tehran increasingly desperate to reach an agreement that will lift the embargo as soon as possible.

"If we work hard in the days and weeks ahead, we should have a positive result," said the EU's chief negotiator Enrique Mora, who is coordinating the talks. "It's going to be very difficult, it's going to be very hard. Difficult political decisions have to be taken both in Tehran and in Washington," he told journalists.

Negotiators are trying to find a way to revive the so-called Joint Comprehensive Plan of Action, the 2015 deal under which the US, Britain, Germany, France, Russia and China agreed to lift sanctions on Tehran in exchange for strict limits on Iran's nuclear programme, which in the meantime is creeping ever closer to the refinement of weapons-grade uranium.

Iran's nuclear chief Mohammed Eslami has ruled out the enrichment of uranium to weapons-grade levels even if the negotiations fail. However, the US is intent on preventing Iran from arming itself with nuclear weapons, and has already begun preparing more sanctions to further isolate the country if an agreement cannot be reached in this round of talks.

One of the major sticking points in the current negotiations is the sequence of de-escalation steps to be taken by both Washington and Tehran.

Iran is not only demanding that the United States first lifts its sanctions, but also wants guarantees that it will not withdraw from the pact again in the future, while the US will not lift sanctions until it has guarantees that Iran has mothballed its nuclear programme.

Western diplomats say the talks only have a few weeks to yield a breakthrough before Iran's advancements in nuclear know-how make any deal irrelevant.

In seven rounds of negotiations so far, Iran and the US have been unable to reach an agreement despite mediation attempts the other parties to the talks.

The US pulled out of the 2015 nuclear pact in 2018 under then-president Donald Trump and re-imposed sanctions, causing Iran to respond by restarting its nuclear programme. (dpa)

END_OF_DOCUMENT_TOKEN_TO_BE_REPLACED
Social media
and networks
Subscribe to our
newsletter