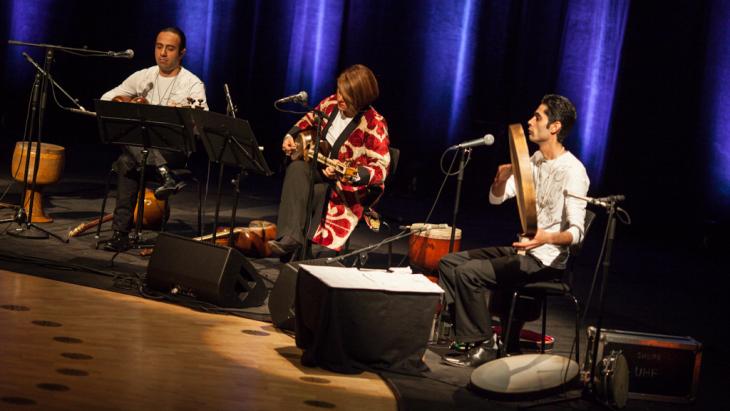 Traditional Persian classical music enjoys an almost unassailable status in Iran – in contrast to the country's rather disreputable but creative underground scene. The "New Sounds of Iran" Festival shows how the two apparently conflictive genres can be combined. Amin Farnanefar reports on the event and new trends in Iranian music

A key concern in the ongoing German integration debate is a call to open cultural institutions such as museums and concert halls up to non-European culture - to bring the German public closer to its immigrant communities -, but also to get more members of migrant communities into the "hallowed halls".

If this goes according to plan, as it has done for example for a while now in at the Cologne Philharmonic, then as well as Smetana, Grieg and Beethoven audiences also get to hear works by regional icons such as Mohammad Reza Shadjarian, Sezen Aksu and Anwar Brahim. A series of events at the Elbe Philharmonic Hall in Hamburg and the Cologne Philharmonic makes it visibly and audibly plain to what extent the concept of "high culture" is being influenced and changed by migration and globalization. 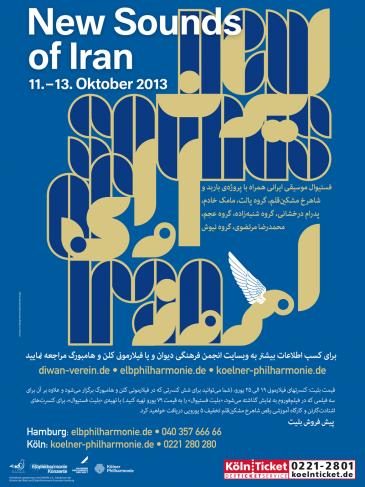 Classical Iranian soundscapes and urban sounds: The "New Sounds of Iran" Festival initiated by the Cologne-based "Academy of the Arts of the World" and "Diwan" Association is probably the largest spectacle of Iranian music in Europe

"New Sounds of Iran", initiated by the new Cologne-based "Academy of the Arts of the World" and its "Diwan" association is probably the largest festival of Iranian music to take place in Europe. Its primary achievement is to afford a passage through the latest developments in Iranian music – and it shows that traditions are also in flux there, in a productive tussle between various trends from East and West, North and South.

The virtual map in use here, the "music of the imaginary Iran" – to use a title coined by music ethnologist Martin Greve for a book originally on Turkey – not only spans the Iranian homeland, but also naturally the vibrant exiled community and its Diaspora. Many representatives of the Iranian musical avant-garde live in Europe, Canada or the US: The gruelling authorisation process for concerts or CDs through the puritanical Ershad Ministry drives many bands and musicians out of the country sooner or later.

Members of the cult band "Kiosk", formed in Tehran in 2003/04, are now scattered throughout the US and Canada: Frontman Arash Sobhani sings in manly, melancholy style about the malaise of the megacity Tehran or the stress caused by a Facebook friendship, but he can also equally well launch a sarcasm attack on the influential pistachio billionaire and ex-president Rafsandjani.

The satirical texts have – since Sobhani has been living in San Francisco – become even more unambiguous. This is in a certain sense a circular movement, a return to the source. Sobhani says the group's typical association of humour and politics is derived from the American Beat movement; this reached "Kiosk" in Iran via the lyrics of Leonard Cohen, Bob Dylan and Dire Straits – all also unmistakable musical sources of inspiration for the band's style, which bears the hallmarks of blues, rock and folk.

It is exactly this blend that really appears to correspond to mentalities and circumstances in Iran, and it can also be found – delivered in varying degrees of melancholy or defiance – in the work of other underground artists; the best known of these are probably exiled musicians Mohsen Namjoo and Shahin Nadschafi – both of them virtuosos playing music that also divulges other influences: a clear point of reference here is the traditional music of Iran.

It is difficult terrain: The gap between ‘serious' and ‘popular' music also divides the generations in Iran and indirectly points to a substantial gulf that prevails there: That some patriarchs are imposing their conservative way of life upon a predominantly young population that is already participating in totally different worlds via satellite television and Internet.

Many of the bands, ensembles and musicians performing for the first time just now in Cologne and Hamburg are consciously seeking proximity to the classical traditions with their fusion experiments, as a way of therapeutically reconciling old and young.

Sorush Ghahramanlou from Mashad is like a kind of Jimi Hendrix of the three-stringed setar; he gets the classical instrument into a groove – with the help of electronic boosting and distortion – until he entices nuances from it the likes of which have never been heard before. The dynamic concerts by his crossover band "Nioosh" are performed against a backdrop of animated calligraphy using the nasta'liq' script, which dates from the 14th century. 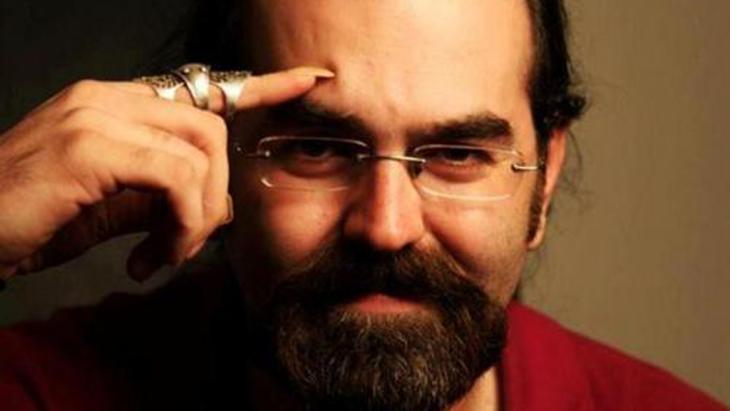 A "Jimi Hendrix of the three-stringed setar": Sorush Ghahramanlou plays in the Iranian rock band "Nioosh"

So it is not only the underground bands, but also high-calibre classically trained musical artists who – in changing formations, interlinked and interacting with one another – are trying out new style directions. Pedram Derakhshani, who was already a master of the santur at an early age, uses delicate mallets to entice spherical sounds akin to those of a sitar, spinet and a synthesiser from the 72-string wooden trapezoid lying horizontally on the floor.

He toured the world with the legendary Dastan ensemble at the age of 19, and became acquainted with a great variety of styles. The 39-year-old is currently focusing on the influential medieval mystic Mewlana Rumi: But regardless of whether the album sometimes sounds like energetic rock music with driving Latin American style brass passages, or whether it sounds more like laid-back electro ambient music – often the vocals and mystical texts form the unmistakable Iranian element.

In Iran itself, the ambiguous symbolic lyricism of classical works provides a means of sidestepping the censor. Outside the country it becomes an adhesive that holds the essence of national identity together even in the most wide-ranging musical manifestations.

Multi-cultural instead of ethnocentric

Two paths facilitate the opening of these venerable traditions without immediately descending into the prattling pop kitsch that is just as unbearable in Tehran as it is in "Tehrangeles", the large community of exiled Iranians in L.A.. One is the inward opening, onto the varied spectrum of the Iranian "multiculture". For too long, musical high culture was only defined through the reference to what was purely Persian, while the rich variety of regional and local traditions in the multiethnic state was sidelined.

The Arab-African musical cultures of the Iranian South around Bandar Abbas were mocked in popular culture and always in cinema as exotic-comic "Bandari" entertainment. In the face of this ethnocentricity, Said Shanbehzadeh's ensemble confidently asserts its "Bushehri" style: In his hometown, the port city of Bushehr on the Persian Gulf, wide-ranging elements of non-Persian folklore are interlaced: Indian, Arab and Central African rhythms, the trance influences of the exorcists. There are hints of reggae, jazz and rock. 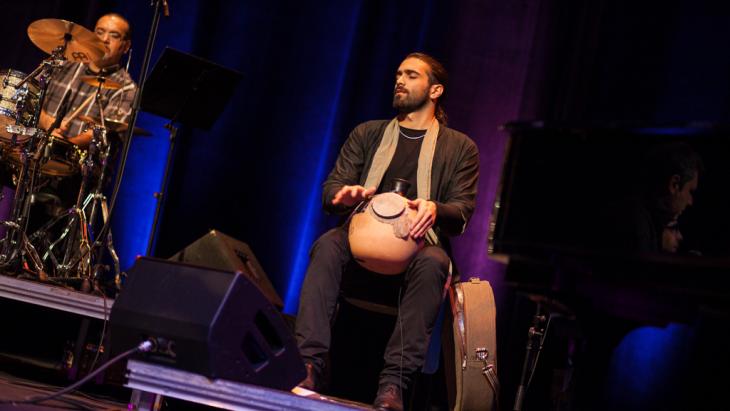 Virtuosity, flexibility and musical openness: Pedram Derakhshani was already touring the world with the legendary Dastan ensemble at the age of 19, during which time he became acquainted with a variety of musical styles

The rap cultivated by musicians from coastal regions did not come from MTV, but much earlier: from Africa, Hormoz and Menab, the slave markets of the 17th century. Shanbehzadeh, whose ancestors come from Zanzibar, deploys regional instruments: the Neyanboo – a mighty set of bagpipes – or the Boogh – which is a horn, but also performs with post-traditionalists such as Pedram Derakhshani or the crooner Kamran Rasoulzadeh.

A hybrid game with one's own origins

The other way to open classicism is in the hybrid game with one's own origins: This is why the London band "Ajam" knows that this cultural heritage is becoming increasingly difficult within the Diaspora, and they cheerfully throw everything overboard and cast everything into disarray, playing hip-hop on traditional instruments, for example.

"Ajam" is the Arab terminology often applied to Iranians as non-Arab Muslims, and the group's videos are urban collages full of self-ironic scenes featuring Persian accessories: a full taxi, a water pipe, moustache and kohl-lined eyes. In their lyrics, the Londoners extol this very "clash of the cultures" as a new lifestyle.

This could all simply be cast off with a load of noise, like the Tehran post-punk band "Hypernova", which scored a hit in the US with "Fairytales". Or like the unrelenting heavy metal craze: when heads shake to the music of "Arsames" to "Hyper Planet" in Tehran, then this isn't an expression of disapproval – it's called head banging.

The boundaries that previously defined "traditional" Iranian music are currently being blurred and extended. And the outcome could serve as an inspiration to the western musical world too.

Home
Print
Newsletter
More on this topic
Mohammad-Reza Shajarian: The Master RebelOriental Music in the West: A Creative Musical LaboratoryProtest Songs in Iran: Tired of the Kiss of the Whip
Related Topics
Iranian music, Musical worlds
All Topics

Among Muslims, the image of women as "cossetted hijab-wearing princesses" is frequently invoked. But Muslim women have long wanted to be more. In her essay, Karoline Roscher- ... END_OF_DOCUMENT_TOKEN_TO_BE_REPLACED

The USA and NATO plan to withdraw from Afghanistan by September. The operation is risky, the outcome uncertain. Many Afghans fear civil war. The quake on the Hindu Kush will also ... END_OF_DOCUMENT_TOKEN_TO_BE_REPLACED

Even in times of war and pandemic, refugees are still being deported to Afghanistan. Several deportation flights have taken place in recent weeks alone. Since those affected often ... END_OF_DOCUMENT_TOKEN_TO_BE_REPLACED

On 7 March, Switzerland became the latest European country to vote in favour of a so-called "burka" ban. It was yet another feather in the cap of the right-wing populist Swiss ... END_OF_DOCUMENT_TOKEN_TO_BE_REPLACED

German Middle East analyst Guido Steinberg and television journalist Ulrich Tilgner have both published new books on the conflicts in the Middle East. Their analyses and their ... END_OF_DOCUMENT_TOKEN_TO_BE_REPLACED

END_OF_DOCUMENT_TOKEN_TO_BE_REPLACED
Social media
and networks
Subscribe to our
newsletter