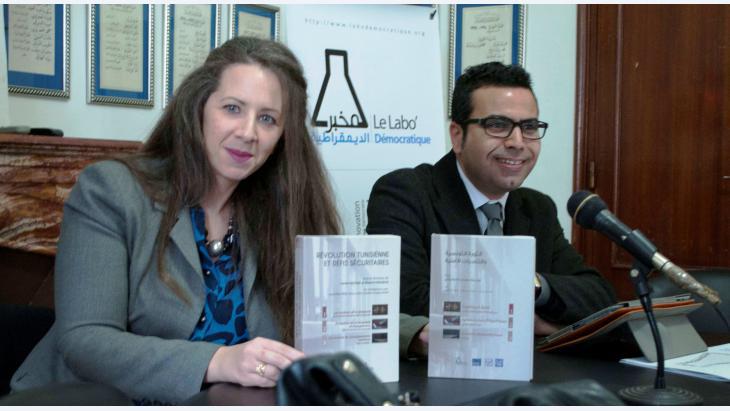 NGO report on the Jasmine Revolution and security in Tunisia

How to make the transition from dictatorship to democracy

Reform of the security system is one of the biggest challenges facing Tunisia – one that the country has not yet undertaken. But now the non-governmental organisation "Le Labo' Democratique" (The Democratic Lab) has released the first comprehensive analysis of the Jasmine Revolution and the security challenges faced by the country. Sarah Mersch was at the launch

Anyone hoping for spectacular revelations from the archives of the Tunisian secret police will be disappointed by the three-volume study "Révolution tunisienne et défis sécuritaires" (Tunisian Revolution and Security Challenges). But the document with the somewhat unwieldy title is not out to cause a sensation; it is instead a sober and thorough analysis.

Authors Farah Hached and Wahid Ferchichi spent three years preparing the report. The two jurists deliver a comprehensive analysis of the legal framework in Tunisia, along with international comparisons and extensive recommendations for policy-makers. Each of the three volumes examines a different theme: the archives of the dictatorship, the protection of privacy and the Tunisian secret service.

The authors deliberately concentrate on the security sector, because "countries that experienced a radical change but failed to reform their security sector, such as Russia or Iran, have all reverted to authoritarian regimes," explains Farah Hached, head of the Labo' Dmocratique.

"We wrote this book for the generations to come, and for the new Tunisian legislators." It is now up to the latter to create a legal framework so that democracy can become a reality in Tunisia. 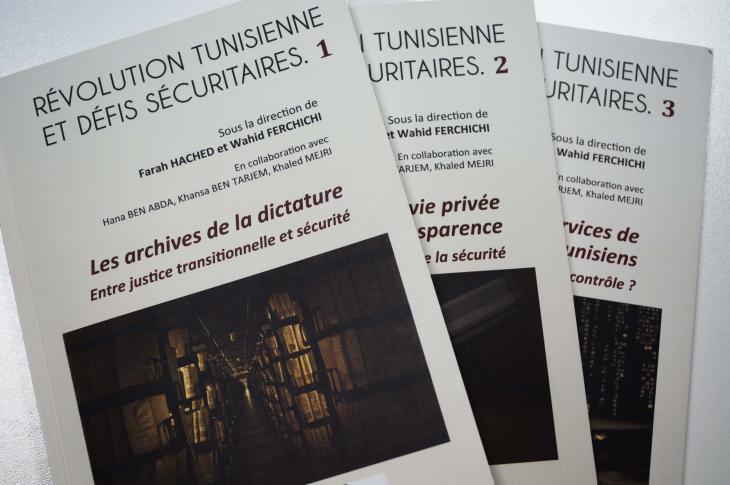 The three volumes of the study "Tunisian Revolution and Security Challenges". In their study, Hached and Ferchichi call for stronger monitoring of the Tunisian intelligence services. Although internal supervision exists on paper, decisions in the past were made directly by the president

Breaking with the dogmas of the Ben Ali regime

"The main question for us was how to make the transition from a dictatorship to a democratic and secure state," says Hached. The authors are thus breaking with the dogma of the former leader Zine El Abidine Ben Ali, who always gave his country and the outside world a black-and-white choice between a dictatorship that would guarantee stability and security or freedom and (Islamist) violence.

Four years after the revolution, Tunisia's situation is now similar to that of the early days of Ben Ali's time in power: he initially promised freedom and democracy, but at the same time, he used the rise of Islamist forces from the ranks of "Ennahda" as a pretext for severely restricting human rights and suppressing all political opposition.

In comparison with 1987, however, the threat no longer comes from "Ennahda" but from radical Islamist terrorists closely allied with IS or al-Qaida. Tunisians currently make up the largest group of foreign fighters in Syria, and in Tunisia itself security forces repeatedly fall victim to attacks.

In the current debate about a new anti-terrorism law in Tunisia, more and more voices are claiming that human rights have no place in the fight against terrorism. These are the voices the authors want to contradict.

"For the past four years, we have been paying the price for the revolt, but that doesn't mean we want to return to the way things were before," explains Hached, granddaughter of the well-known Tunisian trade union leader Farhat Hached and the politician Mahmoud El Materi.

The authors devote a great deal of space to the country's legal framework and the reform thereof. The book is neither a history of the revolution nor a reappraisal of the dictatorship. Although the authors repeatedly illustrate their analyses of the legal framework with concrete examples, in particular in the two volumes on the archives and the intelligence services, they are interested primarily in the framework itself. This is because the laws were observed even under the two authoritarian regimes that Tunisia has experienced since independence.

The problem is that the laws themselves were either repressive or were formulated so vaguely that they were left wide open for repressive interpretations. The three volumes of the study offer more than enough food for thought for future reforms. The authors emphasise that a solution must be found as quickly as possible for the police archives. Since the uprisings on 14 January 2011, part of the archives have been destroyed, another part has been consigned to the national archives, and yet another is still lying around the presidential palace without any clear regulations that clarify who has access and to what extent.

Fear of the return of censorship

Equally vague to this day are the details of the organised spying on Internet users under Ben Ali. Moreover, the establishment of a new telecommunications agency after the revolution is now fuelling Tunisians' fear of a return of censorship in the country.

With regard to the intelligence services, Hached and Ferchichi primarily call for stronger monitoring and control. Although internal supervision is provided for on paper, decisions were in the past made de facto directly by the president. The authors furthermore recommend an additional parliamentary control body. This would be an absolute first for Tunisia.

In addition to the authors' recommendations, the book contains comments by members of civil society and state institutions with whom all three volumes were discussed before publication. This too is a first in post-revolutionary Tunisia. "That the Ministry of the Interior sent us a dozen people to discuss things is in itself a sign of progress," remarks Wahid Ferchichi, laughing. This is one more reason for cautious optimism about the future of the country. But there is still a need to remain vigilant, he warns.

While the public debate on the role of the police, public security and terrorism is often conducted on a very emotional level in Tunisia, the book is refreshingly calm and without political bias – without forfeiting anything of its relevance and incisiveness.

Tunisia has launched a successful transition to democracy, but difficult economic and social times lie ahead. According to political scientist Said AlDailami, Europe should focus ... END_OF_DOCUMENT_TOKEN_TO_BE_REPLACED

Mass protests began in Egypt on 25 January 2011. They triggered the overthrow of long-time ruler Mubarak. Ten years later, many human rights activists and journalists are in ... END_OF_DOCUMENT_TOKEN_TO_BE_REPLACED

Mass protests began in Egypt on 25 January 2011. They triggered the overthrow of long-time ruler Mubarak. Ten years later, many human rights activists and journalists are in ... END_OF_DOCUMENT_TOKEN_TO_BE_REPLACED

Recent unrest shouldn't come as a surprise to anyone who's followed Tunisia's trajectory. The image of the North African country as the only "survivor" of the uprisings in the ... END_OF_DOCUMENT_TOKEN_TO_BE_REPLACED

Ten years after the start of the Arabellion in North Africa and the Middle East, many view the movement as a failure. But rather than being over, it has now entered a more mature ... END_OF_DOCUMENT_TOKEN_TO_BE_REPLACED

M’hamed Oualdi presents the story of a manumitted-slave-turned-dignitary in the Ottoman province of Tunis and the posthumous conflicts over his estate as a case study to ... END_OF_DOCUMENT_TOKEN_TO_BE_REPLACED
Author:
Sarah Mersch
Date:
Mail:
Send via mail

END_OF_DOCUMENT_TOKEN_TO_BE_REPLACED
Social media
and networks
Subscribe to our
newsletter