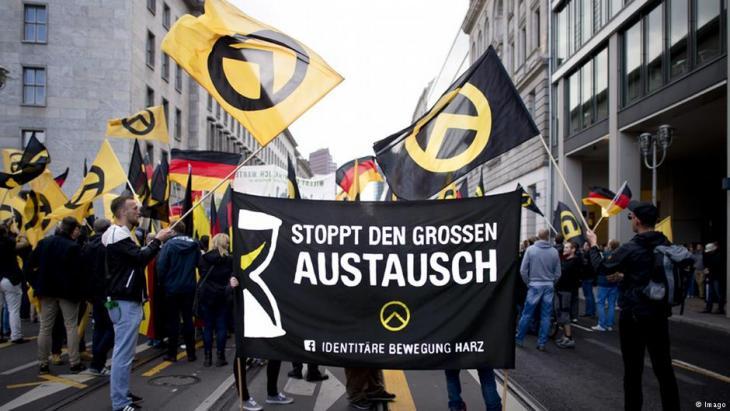 NGO with an Identitarian agenda

When members of a German Alt-Right NGO visited a Syrian refugee camp in Lebanon recently, it was ostensibly to offer aid to the destitute. But the visit served another purpose: playing out the Identitarian agenda of Fortress Europe to the home crowd. Anchal Vohra reports from the Bekaa Valley

Muazzaz Ali and her daughter Lama Farzad are sitting under the shadow of a cross. The light falling through the window silhouettes the crossed struts of the wooden frame on the tent's white canvas.

The women are Syrian refugees and war widows from Homs. They're sitting on the floor of the tent with hands clasped together, eyes cast down. It almost looks as if they are praying to the cross but they are not. They are Muslim by faith, a simple fact of life for them – but for the Germans paying the rent for this tent, an entirely different matter.

In May this year, two German nationals came to the refugee camp in Lebanon's Bekaa Valley. They wore t-shirts labelled Hilfe Vor Ort (Aid on the Spot) and said they were charity workers.

"They just talked to us about the war," says Muazzaz, completely unaware of their identity. "They filmed the tent," adds Lama.

A charity in name only

The two Germans belong to a group called Alternative Help Association (AHA), which ostensibly wants to help war-afflicted people on the ground, as many charities do. Their real aim, however, is somewhat different: to stop their "flight" to Europe.

The two men, Nils Altmieks and Sven Engeser, visited the camp as AHA caseworkers, but they are also members of the Alt-Right or Identitarian movement that is popping up across Europe. The movement claims to be patriotic and denies far-right affiliations, yet it preaches Islamophobia and is explicit about stopping Muslims from entering the EU. They follow a concept called "ethno-pluralism", which advocates that regions be divided along ethnic lines. 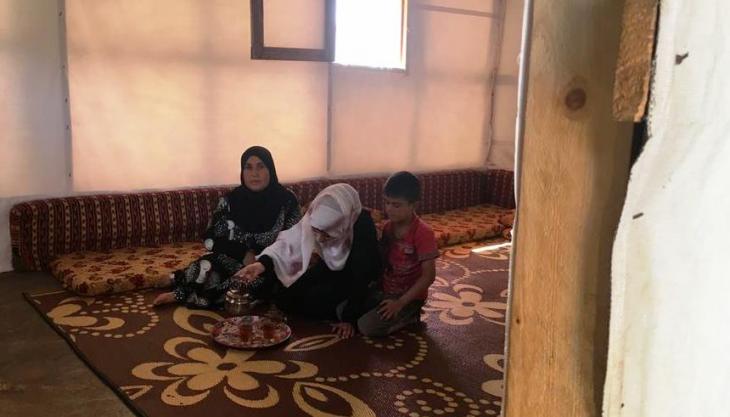 Disguised as aid workers: last May, two Germans from the Identitarian organisation "Alternative Help Association" (AHA) appeared in the refugee camp in Lebanonʹs Bekaa Valley. They wore T-shirts with the inscription "Hilfe vor Ort" and pretended to aid workers. "They only talked to us about the war," reports Muazzaz, who didn't even know who the two men were. "They filmed our tent"

The website of the Identitarian movement claims that Europe is going through a demographic crisis, the birth rate of native-born Europeans dwindling while there is "simultaneous growth of Islamic parallel societies and mass immigration".

Asked to clarify their classification of Europe as a "Christian continent" and how the influx of refugees challenges their – as he suggests – "Christian identity", Engeser responded: "Most migrants coming to Europe have a Muslim background and thus contribute to the Islamisation of the continent. In some major European cities we are already in the minority as Europeans. We want to protect our ethnic and cultural identity."

The European Court of Justice has given its backing to companies that don't allow female Muslim staff members to wear headscarves – as long as they don't permit the wearing of ... END_OF_DOCUMENT_TOKEN_TO_BE_REPLACED

The disappearance of Razan Zeitouneh and her colleagues has been one of the greatest mysteries of the Syrian war – until today. DW's investigative unit hunted clues across six ... END_OF_DOCUMENT_TOKEN_TO_BE_REPLACED

Muslims in Europe regularly experience threats, witness attacks and are the target of hate across national borders. Now the Council of Europe, the continent's leading human rights ... END_OF_DOCUMENT_TOKEN_TO_BE_REPLACED

The West is pulling out of Afghanistan after 20 years, but the conflict remains – and the Taliban are stronger than they have been for a long time. And now? The renowned Taliban ... END_OF_DOCUMENT_TOKEN_TO_BE_REPLACED

United States and NATO troops are leaving Afghanistan after 20 years, despite the fact that the Taliban is still advancing. The German Bundeswehr is already out. Sandra Petersmann ... END_OF_DOCUMENT_TOKEN_TO_BE_REPLACED

Comments for this article: Preying on Syrian war widows

I'm very disappointed with the content and quality of this piece. The disparate observations and facts are arranged almost haphazardly and little concrete reporting is provided to bolster the author's concern over the proposed hidden agenda of the AHA.

END_OF_DOCUMENT_TOKEN_TO_BE_REPLACED
Social media
and networks
Subscribe to our
newsletter