Egypt's highest-ranking imam at the renowned Al-Azhar mosque has banned girls from veiling their faces at religious schools – causing a public scandal. Alfred Hackensberger has the details

Hijab, chador, burqa or niqab? – The veiling of Muslim women continues to provoke controversy. This time it is the niqab, or face veil, at the center of the conflict-charged fundamental debate within the Islamic world. By Alfred Hackensberger 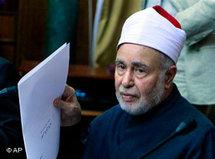 "A woman's face is nothing to be ashamed of!" – Grand Sheikh Tantawi had banned women from wearing the niqab in parts of the Al-Azhar mosque, saying it had nothing to do with Islam

​​The bone of contention is none less than the Grand Imam of Cairo University and the Al-Azhar Mosque. Mohammed Sayed al-Tantawi, one of the most senior legal scholars in Sunni Islam, declared that a veil that covers a woman's face leaving only a slit for the eyes is not religiously permissible.

During a visit to one of the schools affiliated to Al-Azhar University early in October, the theologian was irritated by a girl's niqab. He then ordered the baffled girl, who had ironically only worn the veil in honor of the high-ranking visitor, to take it off and never put it on again. "These are traditions that have nothing to do with religion," he explained to the students. At the same time the Imam promised to ban this particular kind of veil from the school grounds.

A few days later, female students veiled with the niqab were no longer allowed to enter the halls of residence at Al-Azhar University. Those who did not take off their niqab were sent away. The supreme council at the highest seat of religious learning in Sunni Islam had "agreed the ban on the veil," announced Mohamed Abdel-Aziz, deputy chairman of the council. The ban also applies to the girls' classrooms. It affects both teaching staff and the 500,000 girls out of a total of 1.4 million schoolchildren and students who study at the university and its affiliated educational establishments.

Veileld women in Cairo: the ban can be seen as part of the Egyptian government's efforts to block the spread of radical Islamist tendencies

​​The decision was also approved by the Ministry for Higher Education, which announced that it plans to extend the ban to universities across the country. Minister Hany Halal explained the measure would primarily be taken for security reasons. Just recently 15 young men dressed in niqabs tried to enter the girls' dormitories, he said.

"I've been living in a student hall of residence for years," said one female student who wanted to remain anonymous to avoid potential problems with the university administration, "but I've never heard of anything like that happening."

A frightening take on Islam

Asra Q. Nomani says that a security risk is indeed a valid argument. The US author has just published a book titled "Standing Alone: An American Woman's Struggle for the Soul of Islam". But she says such an argument is not based on uninvited male visitors to girls' dormitories. From Islamabad to Baghdad, the niqab has been misused by militant Islamists to avoid police checkpoints or to carry out attacks.

Nomani says however that a much more decisive factor in any move to ban the face veil is "that it stands for a frightening take on Islam, one that preaches the literal interpretation of the Koran." And this is especially problematic in the interpretation of those verses where the meaning is in any case unclear, she adds.

Tribal tradition: in many scholars' opinion, facial veils are not prescribed by the Koran, but simply a custom going back to pre-Islamic times

​​"Militants exploit this to justify domestic violence, intolerance or even suicide attacks," says Nomani. When she talks about "a frightening take on Islam", she is referring to the the schools of thought known as Wahhabism and Salafism, which are based in Saudi Arabia and promote ultra-conservative interpretations of Islam.

There are two sections of the Koran that make this especially clear (Sura 24, verse 31 and Sura 33, verse 59), passages that make references to the covering of the female body. Neither passage can be unequivocally interpreted as an instruction that a woman must wear a head covering, or exactly defines the parts of the body that have to be concealed.

Pieces of clothing are named, such as "jilbab" and "khimar", but it remains unclear what form, color or function they had during the Prophet's era. In a German translation of the Koran commissioned by Saudi Arabia this is not taken into consideration at all, and the word "khimar" is simply translated as "Kopftücher", or "headscarves". One simply has to be aware of the subtleties of meaning can be lost in translation.

"This Wahhabi and Salafi mindset came to Egypt in the 1970s," says Hala Mustafa, editor-in-chief at Al Ahram Media in Cairo. "And it has increased its hold over the last three decades." This is evident on the streets of the capital, with increasing numbers of women covering themselves from head to toe.

"Salafi satellite channels today propagate the message that the niqab is an obligation," explains Salem Abdel Gelil, from the Egyptian Ministry of Religious Endowments, Awqaf.

The government of the Nile nation is not in the least happy about this ultra-conservative trend. The niqab ban at universities is just one of many steps Cairo is taking to counter it. The Ministry of Religious Endowments prints brochures that describe the niqab as un-Islamic. The Health Ministry plans to ban doctors and nurses from wearing the face veil.

Against constitution and freedom

Sumerian temple priestesses wore veils in 5000 B.C. In 1300 B.C., Assyrian kings introduced the veil for married and wealthy women. This is similar to the Byzantines (4th to 5th centuries A.D.), the Sassanids (c. 224-652 A.D.), in Ancient Greece and old Rome, where to be veiled was a privilege reserved for high society. 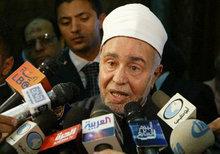 Global impact: Grand Sheikh Tantawy based his ban on a constitutional resolution passed in 1996, which allows representatives of the educational system to decide on clothing rules for schools

​​So the Grand Imam of Al-Azhar University Mohammed Sayed al-Tantawi is absolutely right when he describes the niqab as a tradition from a pre-Islamic era. But this view has not made the theologian – who is known for his headstrong manner – any more popular. He has already come under fire several times for supporting the French ban on the hijab, shaking hands with the Israeli President Shimon Peres, and insisting that women pregnant from rape should have the right to abort.

The conservative Egyptian cleric Youseff al-Badri described the niqab ban as "a violation of a constitution that is there to guarantee public freedom."

The Grand Mufti of Dubai holds a similar view. He spoke of a "restriction of the freedom of women," and said the move was "in total contempt of their faith, their culture and their traditions."

The Saudi Arabian Sheikh Mohammed al-Nojaimi from the Institute of Islamic Law spoke of a possible division of Egyptian society into two camps, for or against the niqab. At the same time, he contradicted his Egyptian counterpart Tantawi's claim that the face veil has nothing to do with Islam: "The niqab is mentioned in reports on the traditions of the Prophet," he said. These state that a woman should only take off her face veil during the pilgrimage to Mecca, as "this goes to prove that she wore it at all other times."

"What are wearers of the niqab supposed to do?"<

For devout Muslims who wear the niqab out of conviction, the Egyptian ban is tantamount to a defeat, even if it is restricted to universities. They have become accustomed to the fact that action is taken against the headscarf or veil in western countries. And perhaps also in the few secular countries where most of the population are Muslims, such as in Turkey or Tunisia.

But now the veil, a piece of clothing that has so often had to be defended against criticism, is being declared un-Islamic by members of the Muslim community, and furthermore by one of the most senior legal scholars in Sunni Islam. The result is helplessness.

"What are we supposed to do?" asks Sadaf Farooqi in the Saudi-Gazette newspaper. "What's really unsettling is the swift global impact of this development," writes the columnist, who lives in Karachi. "Within a few days after Mohammed Sayed al-Tantawi's comments, all kinds of groups from Italy to Canada began calling for a ban on the niqab."

Farooqi writes that such groups also include "self-proclaimed progressive Muslims." Of course these feminist Muslims now feel vindicated, after all, they have for a long time described the veil as an antiquated tradition that does not belong to Islam.

"It is high time to impose a global ban on the face veil," writes US author Asra Q. Nomani. "It is the expression of an Islam that must disappear."

For Sadaf Farooqi, who is proud to wear her niqab, this is something she finds difficult to understand. The journalist thanks God that in her country, she is allowed to leave the house in her veil, visit educational establishments and go for a walk without fear of abuse. "A luxury that our Muslim sisters in Britain, France and Canada do not enjoy," she says.

Comments for this article: Divided Scholars

END_OF_DOCUMENT_TOKEN_TO_BE_REPLACED
Social media
and networks
Subscribe to our
newsletter