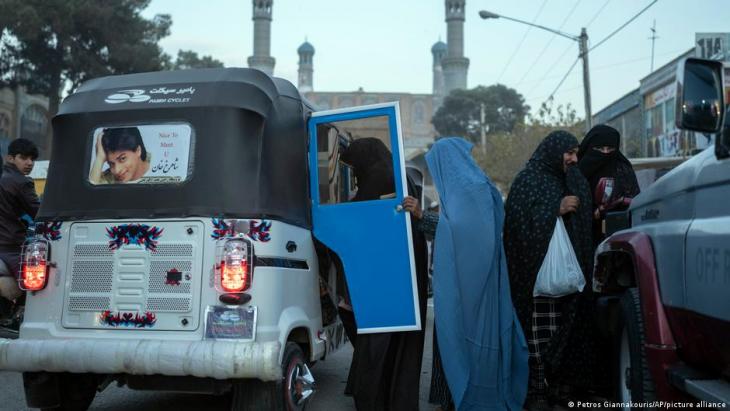 Afghanistan's Taliban authorities said on Sunday that women seeking to travel long distances should not be offered road transport unless they are accompanied by a close male relative.

The guidance issued by the Ministry for the Promotion of Virtue and Prevention of Vice, which also called on vehicle owners to refuse rides to women not wearing headscarves, has drawn condemnation from rights activists.

The move follows the Taliban barring many women in public-sector roles from returning to work in the wake of their seizure of power on 15 August, and as girls remain largely cut off from secondary schooling.

It also comes despite the hardline Islamists seeking to project a moderate image internationally in a bid to restore aid suspended when the previous government imploded during the final stages of a US military withdrawal.

"Women travelling for more than 45 miles (72 kilometres) should not be offered a ride if they are not accompanied by a close family member," ministry spokesman Sadeq Akif Muhajir said on Sunday, specifying that the escort must be a close male relative.

Muhajir said on Sunday that the hijab, an Islamic headscarf, would likewise be required for women seeking transport.

The Taliban's definition of the hijab – which can range from a hair covering to a face veil or full-body covering – is unclear, and most Afghan women already wear headscarves.

Human Rights Watch blasted the guidance. "This new order essentially moves... further in the direction of making women prisoners," Heather Barr, the group's associate director of women's rights, told AFP.  It "shuts off opportunities for them to be able to move about freely, to travel to another city, to do business, (or) to be able to flee if they are facing violence in the home", Barr added.

Early this month, the Taliban issued a decree in the name of their supreme leader instructing the government to enforce women's rights. But it did not mention girls' access to education.

On Sunday, Afghanistan's Minister for Higher Education Abdul Baqi Haqqani said the authorities were discussing the issue. "The Islamic Emirate is not against women's education but it is against co-education," Haqqani told reporters. "We are working on building an Islamic environment where women could study... it might take some time," he said, without specifying when girls might return to school and university classes across the country.

Women's rights were severely curtailed during the Taliban's previous stint in power in the 1990s. They were forced to wear the face-covering burqa, only allowed to leave home with a male chaperone and banned from work and education.

Respect for women's rights has repeatedly been cited by key global donors as a condition for restoring aid.

The UN has warned that Afghanistan faces an "avalanche of hunger" this winter, estimating that 22 million citizens face "acute" food shortages. (AFP)

END_OF_DOCUMENT_TOKEN_TO_BE_REPLACED
Social media
and networks
Subscribe to our
newsletter