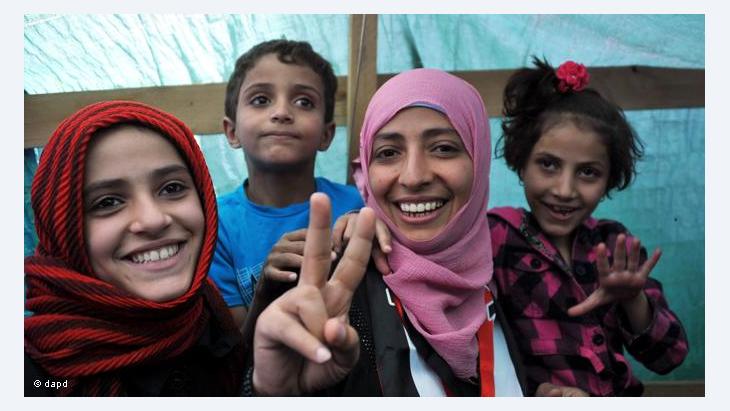 A Woman Leading Change in Yemen

﻿Tawakkul Karman, one of three women to win the Nobel Peace Prize for 2011, is "the international face of the Yemeni pro-change movement." Journalist Alice Hackman examines the role that female activists, particularly Tawakkul Karman, are playing in Yemen's protests

﻿With two presidents unseated in Tunisia and Egypt and highly publicised protests across Libya, the recent demonstrations in Yemen are catching the world's attention. The escalating violence is worrying and only time will tell if it will lead the overthrow of Yemeni President Ali Abdullah Saleh will take place in the next few days or whether change will take much longer in Yemen. But one thing is different in Yemen: the international face of the Yemeni pro-change movement is a woman.

Profiled in high profile outlets including The Washington Post, The Toronto Star and Time Magazine, journalist and human rights activist Tawakkul Karman represents a positive image of Yemeni women. Long before she was photographed leading February's protests against the government, she was called a brave defender of freedom of expression and human rights in Yemen.

In a January 2010 interview with Al Jazeera, she spoke of detained journalists, a sheikh's tyranny against villagers in Ibb, a governorate south of the capital, the lack of justice for the family of a murdered doctor, and – long before January's WikiLeaks revelations – even went so far as to accuse the government of being "in alliance" with Al Qaeda. Today, she continues to protest, demanding peaceful change. 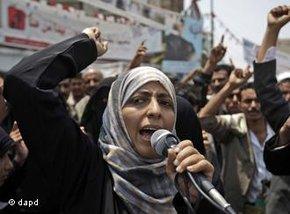 Addressing national grievances: Tawakkul Karman is a journalist and human rights activist who heads the group 'Women Journalists Without Chains', which she co-founded in 2005. She is also a senior member of the opposition party Al-Islah

​​Finally a refreshing change from the "over-sized post box" image of Yemen's women in the niqab (a face veil worn in addition to the headscarf), or the photos of child bride Nujood Ali that have fuelled Yemen's early marriage debate since April 2008.

Of course, all is not rosy for Yemen's women. Yemeni parliamentarians (one out of 301 is a woman) still have not agreed on a minimum age for marriage to prevent girls like Nujood, nine years old at the time of her divorce, from being married before they finish school. Illiteracy among women is still a whopping 67 per cent, women are typically the first victims of food shortages (one in three Yemenis suffers from severe malnutrition according to the UN) and many have difficult and limited access to healthcare.

Women's participation in politics is minimal and, despite two female ministers, Yemen has consistently ranked at the bottom in the World Economic Forum's Global Gender Gap Index since it was first included in the ranking in 2006.

But there is hope.

Karman and fellow female human rights activists, such as journalist Samia al-Aghbari, are on the frontline of protests in the Yemeni capital. They may not be representative of Yemeni women in general, but they are indeed inspiring.

In fact, one Yemeni man was so impressed by al-Aghbari's courage during the protests of 13 February when she was knocked onto the pavement by a member of security, that he wrote her a poem, "Revolution of the Green Hijab... To Samia al-Aghbari and all the other revolutionaries", which was published the following day on the Nashwan News website.

Although they are not all out on the streets, there are a number of inspiring women in Yemen. In addition to Karman and al-Aghbari, Yemeni women are human rights activists, journalists, doctors, educators, members of civil society, academics, wives of political detainees, photographers, and even tweeters. 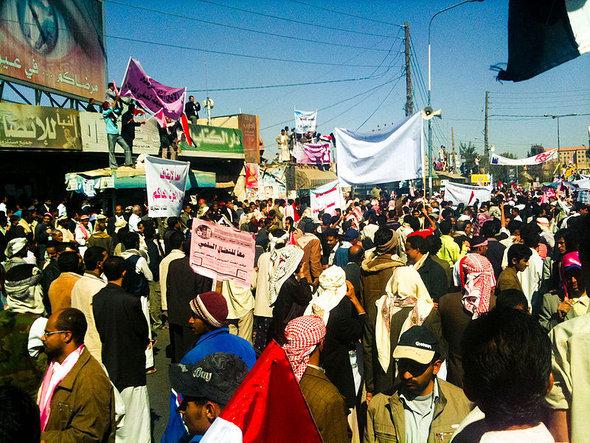 At 32, Tawakel Karman is one of the youngest winners of a Nobel Peace Prize. As one of the leading figures of the opposition, she has called for protest on the "Day of Rage" in Sana'a on 3 February 2011 (picture)

​​Dozens of brave women have run against all odds and lost in local council and parliamentary elections. According to Nadia al-Sakkaf, female Editor-in-Chief of the independent Yemen Times, winning is difficult without the support of a political party, and most politically ambitious women at the moment are waiting to see how the current situation develops.

Then there are the women who quietly start their own revolutions. In May 2010, a literacy eradication course inspired women in rural Dhamar, a governorate south of Sana'a, to go home and ask their husbands and brothers for their rights to education, inheritance and political participation. Course organisers received phone calls from confused male family members asking what they had been discussing. Participants also rallied together and prevented a man from marrying off his 12-year-old daughter.

When Karman was detained by security for organising protests on 22 January, she made the most of a bad situation by chatting to her fellow female detainees about their rights. "I was happy to discover the prison and talk to the prisoners," she told The Yemen Times after her release.

But perhaps the most inspiring thing about Karman is that she is not speaking up only for Yemeni women, but for Yemeni society as a whole, addressing national grievances such as unemployment and corruption.

It may be too early for a female president in Yemen, but Karman adds a new, welcome dimension to the media coverage of a country usually associated in the Western mind with Al Qaeda, poverty and oppressed women.

Alice Hackman has recently returned to London after two years as reporter and Features Editor for The Yemen Times in Sana'a, Yemen.

Turkey's parliamentary and presidential elections are scheduled for June 2023. But they are already casting a shadow. While the opposition is calling for early elections, ... END_OF_DOCUMENT_TOKEN_TO_BE_REPLACED

In his book "Ground Zero: 9/11 und die Geburt der Gegenwart" (Ground Zero: 9/11 and the Birth of the Present) Islamic scholar Stefan Weidner analyses the consequences of the ... END_OF_DOCUMENT_TOKEN_TO_BE_REPLACED

The rollout of coronavirus vaccines in the Middle East and North Africa is already taking place on a massive scale, with the United Arab Emirates leading the way. Nevertheless, ... END_OF_DOCUMENT_TOKEN_TO_BE_REPLACED

The Prophet Muhammad never executed anyone for apostasy, nor encouraged his followers to do so. Nor is criminalising sacrilege based on Islam’s main sacred text, the Koran. In ... END_OF_DOCUMENT_TOKEN_TO_BE_REPLACED

Surging coronavirus cases in many parts of the world have overshadowed the start of this year's Muslim holy month of Ramadan, with festivities once again curtailed by contagion ... END_OF_DOCUMENT_TOKEN_TO_BE_REPLACED

As Qatar prepares to host the 2022 FIFA World Cup, the country has come under fire for its treatment of migrant workers, with some nations calling for a boycott of the contest. ... END_OF_DOCUMENT_TOKEN_TO_BE_REPLACED
Author:
Alice Hackman
Date:
Mail:
Send via mail

END_OF_DOCUMENT_TOKEN_TO_BE_REPLACED
Social media
and networks
Subscribe to our
newsletter