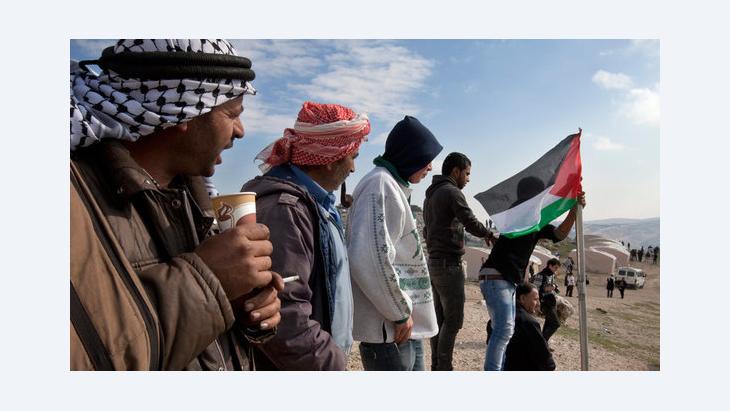 ﻿Palestinian activists are increasingly employing strategies of peaceful resistance: The tent camp they have erected on sites earmarked for settlement construction are symbolic of the battle that has flared up over Areas B and C in the West Bank. Ingrid Ross reports. By Ingrid Ross

﻿﻿Increasing clashes between Palestinians and the Israeli army or settlers at demonstrations in the West Bank over the last few weeks and months have prompted Chief of General Staff of the Israeli Defence Forces Benny Gantz to warn that a third intifada could be in the offing.

Last weekend, Mohammed Asfour, from the town of Abud near Ramallah, died after being injured by a rubber-coated steel bullet during a demonstration two weeks ago. The demonstration was held to protest the death in Israeli captivity of the Palestinian Arafat Jaradat.

Clashes are a daily occurrence in the Israeli-occupied West Bank. Whether regular Friday demonstrations against the Israeli separation barrier, documented for instance in the Oscar-nominated film "Five Broken Cameras", or rallies signalling solidarity with hunger strikers outside the infamous Israeli Ofer Prison near Ramallah – such assemblies, initially organised as peaceful protests, regularly escalate into pitched battles, with Palestinians throwing stones and the Israeli military using tear gas, stun grenades and rubber-coated steel bullets to try to break up the crowds of protesters. 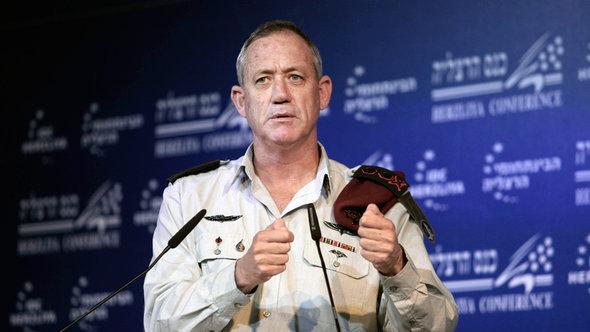 Fear of a "third intifada": In view of the increased frequency of clashes between Palestinians and the Israeli army, Israeli General Chief of Staff Benny Gantz sees signs of a growing confrontation

In a recent report, the Israeli human rights organisation B'tselem sharply censured the excessive use of such measures, commonly referred to as "crowd control". One glance at the statistics suffices to show that tensions have reached a new height in the last few months: according to the UN, some 1,500 Palestinians have been injured in the West Bank since the escalation of the conflict between Gaza and Israel in November 2012.

Battle for the B and C areas

The Palestinians have adopted a new form of non-violent resistance since January, resembling the tactics of the so-called Occupy movement(s). The establishment of camps on strategically important Palestinian land in the West Bank was launched with "Bab al Shams" on the eastern outskirts of Jerusalem. After Palestine was upgraded to observer status by the United Nations, the Israeli Government decided to step up development and construction plans in the E1 area east of Jerusalem, a bone of contention for years.

The international community responded to Netanyahu's decision with the harshest denunciations in the diplomatic repertoire. The Palestinians for their part built a tent city in the area out of protest and called it "Bab al Shams – Gate of the Sun".

The action was tolerated, indeed practically supported, by the Palestinian Authority and professionally staged for maximum media impact. It sparked the building of further symbolic tent villages in the West Bank, such as "Bab al Karamah – Gate of Dignity" and "Bab al Qamar – Gate of the Moon". 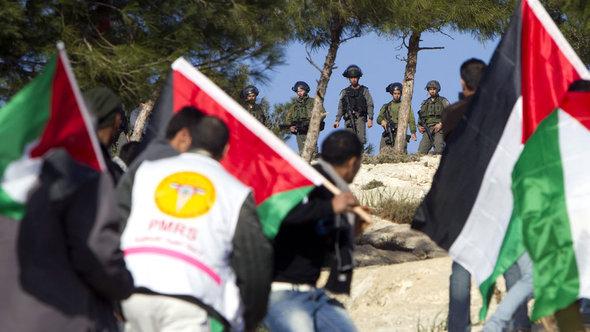 Peaceful forms of protest against settlement construction: Last January, Palestinian activists put up some 20 tents to demonstrate against Israeli plans to build a settlement in an area known as E1. They dubbed the protest site "Bab al-Shams"(Gateway to the Sun) and called for a new Palestinian village to be established there

The encampments and sit-ins are emblems of the struggle that has broken out over the West Bank's B and C areas. In the past, it was mostly nationalist, religious Israeli settlers who spontaneously set up mobile homes in the occupied territories without government authorisation. Once installed, these outposts have proven extremely difficult to evacuate, a process that can drag on for years.

By contrast, Israel did not tolerate the Palestinian activists in Bab al Shams, Bab al Karamah and Bab al Qamar for long. Even though the tents in the E1 area were set up on private Palestinian property, the camp was cleared away within 48 hours – without the judicial support of the Supreme Court. The new Palestinian strategy is evidently hitting a sensitive nerve on the Israeli side.

Palestine needs the support of the international community

Even if none of the tent villages has lasted, with Bab al Shams the Palestinians have achieved two important goals. For one, it attracted international attention to Israel's continued land grabbing in the West Bank. And furthermore, the actions managed to unite different stakeholders behind a common cause. An alliance of civic and political groups, among them local resistance committees, Fatah and Al Mubadara – the Palestinian National Initiative – organised the initiative with the consent of the Palestinian Authority. 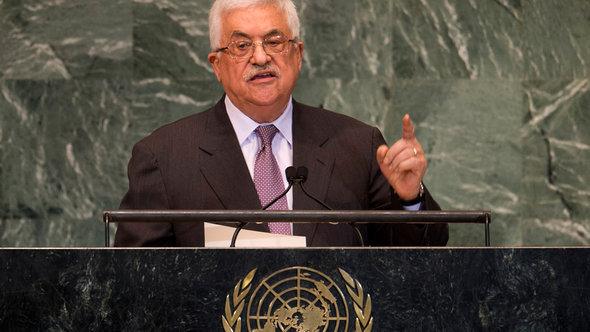 ​​The PA, which is committed to cooperating with Israel in security matters, was more notable last year for containing public protests from the ranks of civil society than for encouraging them. After the UN resolution, however, the cooperation between President Abbas and his Israeli counterparts has reached an all-time low.

It is still too early to speak of a third intifada, because unlike with the first and second intifadas, the demonstrations have not yet evolved into mass protests with participation by broad sectors of the population. What's more, it is in the best interests of the Palestinian leadership in the West Bank to make sure the situation does not get out of hand.

After the Palestinians have been tainted for so many decades with the image of violent terrorists, the PA is well aware that it would only risk losing the support of the international community were it to take up an armed struggle, and it is therefore explicitly pursuing the strategy of non-violent resistance. It will not be able to realise a Palestinian state within the 1967 borders on its own. To achieve this aim, the support of international public opinion and the international community is crucial.

And yet, as US President Obama's visit draws nearer, it is becoming increasingly clear that the Palestinians will probably wait in vain for an American impulse to resume negotiations on the two-state solution.

From the point of view of the leading negotiators headed by President Mahmud Abbas, concessions by the Israeli Government are indispensable for a return to serious peace talks: the release of prisoners might ease pressure in the streets and have a de-escalating effect, but the recognition of the 1967 borders as basis for the talks and the cessation of settlement building are fundamental conditions the Palestinian leadership has set for resuming negotiations.

At the same time, support for a two-state solution is dwindling amongst Israeli policymakers. The new Netanyahu government is unlikely to cede any ground. If the international community – above all the USA – does not devote itself to bringing about a rapid resumption of direct negotiations, the Palestinians will likely need to make a decision in the near future on which direction to take: a departure from the two-state solution in order to fight instead for equal rights with Israelis in a common state, or armed resistance to liberate the territories occupied by Israel.

How is one to convey the history of Islamic images of Muhammad freed from today’s polarised politics? What are the challenges and pinch points of this particular academic ... END_OF_DOCUMENT_TOKEN_TO_BE_REPLACED

A Tunisian farmer attaches a machine to a cow's udder and sets the pump whirring, but he only expects to fetch less than half the normal amount of milk amid soaring fodder prices END_OF_DOCUMENT_TOKEN_TO_BE_REPLACED

Food prices doubled, salaries halved, banks restricting withdrawals: Egyptians now have the same problems as the Lebanese. But if things get worse here, the fallout will be far ... END_OF_DOCUMENT_TOKEN_TO_BE_REPLACED

Any reconciliation between Turkey and Syria’s Assad regime would have disastrous consequences for many Syrians, explains Syria expert Kristin Helberg END_OF_DOCUMENT_TOKEN_TO_BE_REPLACED

Iraq bears the scars of decades of conflict and has seen its antiquities plundered, yet the House of Manuscripts' collection has managed to survive END_OF_DOCUMENT_TOKEN_TO_BE_REPLACED

END_OF_DOCUMENT_TOKEN_TO_BE_REPLACED
Social media
and networks
Subscribe to our
newsletter