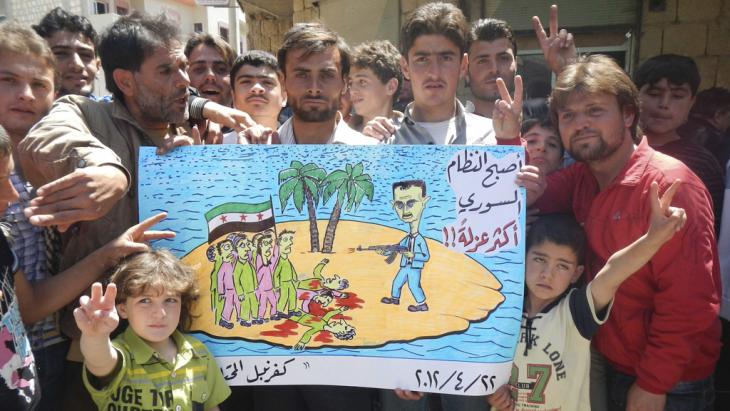 Sowing the seeds of democracy

There is no nation-wide democracy movement in Syria, but there are local initiatives that are defying the war, strengthening civil society and preparing the ground for a free and pluralistic political system, writes Kristin Helberg

Three years into the Syrian revolution, no one talks about it anymore. Instead, all the talk is of war:  civil war, proxy war, war on terror. These days, Syria seems to be made up of jihadists, Islamists, refugees and civilian casualties. We read about Al Qaeda terrorists and German Salafists, about displaced persons, the wounded and starving children.

Where have the hundreds of thousands of demonstrators gone who took to the streets of Hama, Deir Al Zor and Homs in the summer of 2011, calling for freedom and dignity? What ever happened to the activists who painted posters, shot wobbly videos and invoked the unity of the Syrian people in their chants?

One would be forgiven for thinking that they have vanished, are dead, driven away, defeated, or at least irrelevant. It is a fact that many "revolutionaries of the first generation" are no longer alive – that's how Syrians refer to those who were the first to overcome their fears and mobilise others. They staged demonstrations, distributed flowers to soldiers, gave interviews and, with their coordination groups and grassroots committees, put in place the structures for peaceful resistance.

Risking their lives for a free, democratic Syria

By now, the third generation of activists is already at work. This means that the revolution is devouring its children at an alarming rate. However, it also means that dozens of committees are re-inventing themselves each year and that people are still willing to assume responsibility and risk their lives for their vision of a free and democratic Syria.

In Erbin, a suburb of Damascus, activists run a cultural venue with a small library and Internet access where workshops, English lessons and media training take place. This is also where the local chemists meet to organise medical supplies. In Zabadani and a few other cities, activists even publish their own newspapers. 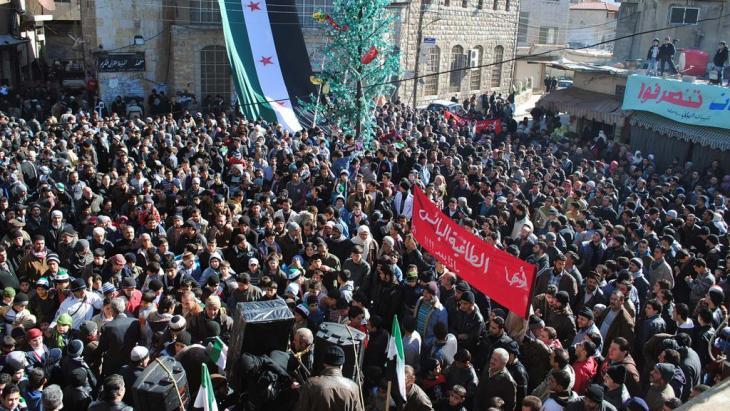 Civil engagement that refuses to die: although Syria's peaceful protest movement is not coherent and doesn't have a central base, it remains alive and active in many small cities and towns around the country

In the southern province of Daraa, abandoned schools are being re-opened and their curricula rewritten; in the sealed-off Palestinian camp of Yarmouk, activists are defying the blockade and their hunger by playing music and singing; in Atareb near Aleppo people are painting over the extremist slogans daubed on walls; and in the Damascus suburb of Douma people are documenting the human rights violations committed by all warring parties.

Anyone who wants to know what Syria's activist scene is thinking and feeling can find out by reading the colourful English-language posters in Kafranbel – a dusty village south of Idlib where activists comment week after week, bluntly and perceptively, on the international community's policy on Syria.

Every Friday in Syria still has its own motto, and demonstrations are still being held. Sometimes there are dozens, sometimes hundreds of people who, despite their hunger and thirst, the cold or the heat, take to the streets to protest against the regime or against the extremist group Islamic State of Iraq and the Levant (ISIL). In terms of the numbers taking part, these protests are insignificant, but they show that in many places in Syria, political awareness and critical thinking have taken root.

The protests will never give rise to a national democracy movement as long as the war continues to rage. Instead, what one can see today in Syria are the seeds of civil engagement. From the outset, Syria's revolution was a decentralised, federal movement. This is why these seeds are germinating mainly in the countryside and on the outskirts of the big cities. They consist of many small, local initiatives that are not in a position to topple the regime in Damascus, but are nonetheless capable of preparing the ground for a pluralistic future for the country. These projects are more important to people's daily lives here than the issues being negotiated by the National Coalition in Geneva or the issues the UN Security Council is discussing in New York.

That only makes it all the more tragic that the civilian forces in Syria now have two more enemies to contend with in addition to the Assad regime. The humanitarian plight of the Syrians forces them to channel all their energy into smuggling food and caring for the sick and wounded. Moreover, the reign of terror of the ISIL in parts of the north-east compels them to either go underground or leave the country temporarily. 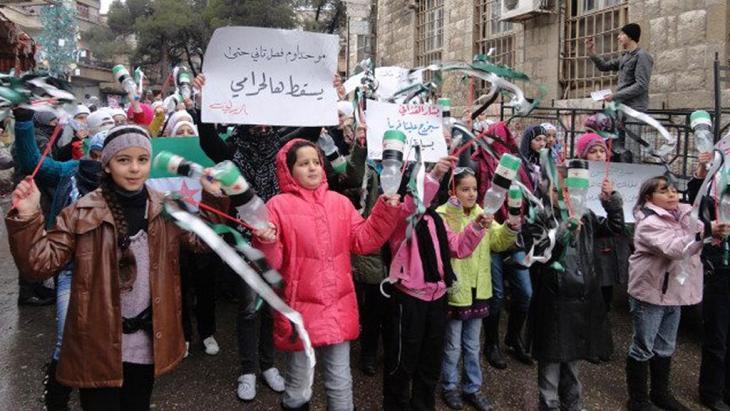 Creative resistance: "What at first glance may seem like a weakness – the lack of a unified democracy movement – might prove to be of benefit in the long run. Because to establish the rule of law in a country as ethnically and religiously diverse as Syria, takes critical, self-confident and tolerant citizens not only in the centre but all across the land," writes Kristin Helberg

This is what happened to the activists of Manbij, a city north-east of Aleppo, where there was a revolutionary council, a free Chamber of Commerce and several newspapers. The same people who built a centre for civil society and organised two cultural festivals there have been on ISIL's most wanted list since its takeover in January 2014. After the extremists threatened via Facebook to behead them, they fled the country.

Previously, the residents of Manbij had managed to come to terms with a wide variety of rebel units, including with fighters from the Islamic Front, a nationwide coalition of local Islamist groups, says Jamil, a Syrian director. He took part in both festivals with his satirical finger-puppet play "Top Goon" and was last in Manbij in December 2013. Back then, he says, the sense of community among the residents, the hunger for art, the desire for political discussion and tolerance in everyday life were still tangible.

The city's conservative Islamists even found a place in their hearts for him of all people, not only a Druze but – even worse – a secular Druze. He remembers in particular the parting words of a fighter with quite a long beard. "You don't believe in God, but I like you anyway." Now, the director fears that the civil engagement and the tolerant mood in Manbij could fall victim to the brutal methods of ISIL.

The arbitrary rule of jihadists, constant rocket fire and systematic starvation – those who are able to debate human rights, hold seminars on coping with trauma and document war crimes under such circumstances will no longer let themselves be told what to do in times of peace.

Already, political awareness in towns like Kafranbel, Manbij and Erbin is more pronounced than in the centre of Damascus. In contrast to countries such as Egypt, freedom of thought in Syria is not emerging in the capital city but outside it.

What at first glance may seem like a weakness – the lack of a unified democracy movement – might prove to be of benefit in the long run. Because to establish the rule of law in a country as ethnically and religiously diverse as Syria, takes critical, self-confident and tolerant citizens not only in the centre but all across the land.

The journalist Kristin Helberg lived in Damascus as a freelance correspondent from 2001 to 2009. Her book "Brennpunkt Syrien. Einblick in ein verschlossenes Land" will be published in September by Herder Verlag.

Liberal Islam: everything revolves around the Koran. In the search for a liberal interpretation, peculiar constructs occasionally emerge. By Alexander Flores END_OF_DOCUMENT_TOKEN_TO_BE_REPLACED

Mass protests began in Egypt on 25 January 2011. They triggered the overthrow of long-time ruler Mubarak. Ten years later, many human rights activists and journalists are in ... END_OF_DOCUMENT_TOKEN_TO_BE_REPLACED

Mass protests began in Egypt on 25 January 2011. They triggered the overthrow of long-time ruler Mubarak. Ten years later, many human rights activists and journalists are in ... END_OF_DOCUMENT_TOKEN_TO_BE_REPLACED

As the photo of Fairouz talking to French President Emmanuel Macron spread around the world, many asked if Arabs today had any contemporary stars of Fairouz's standing. In this ... END_OF_DOCUMENT_TOKEN_TO_BE_REPLACED

When news broke that a vaccine against COVID-19 developed by a Turkish-born couple in Germany had promising results, many media reports placed the ethnic background of these ... END_OF_DOCUMENT_TOKEN_TO_BE_REPLACED

Ten years after the start of the Arabellion in North Africa and the Middle East, many view the movement as a failure. But rather than being over, it has now entered a more mature ... END_OF_DOCUMENT_TOKEN_TO_BE_REPLACED
Author:
Kristin Helberg
Date:
Mail:
Send via mail

END_OF_DOCUMENT_TOKEN_TO_BE_REPLACED
Social media
and networks
Subscribe to our
newsletter