"Mahrem – Footnotes on Veiling" is the title of a new art exhibition which can be seen in Germany until the beginning of August. Turkish sociologist Nilüfer Göle conceived the exhibition as a way of exploring the ambivalence of veiling and its changing cultural symbolism. Ariana Mirza reports. 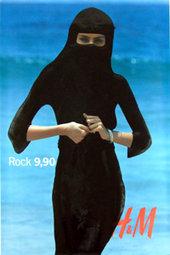 ​​"The themes of the social sciences have a major influence on the subjects of contemporary art," explains sociologist Nilüfer Göle. The exhibition, which can be seen in the "tanas berlin" gallery until August 10, provides confirmation of this. The exhihibition is part of the "Non-Western Modernities" series. Whether it's the "headscarf controversy" in Europe or the dress code dispute in Iran, social problems demand a response from artists. The exhibition's exhibits take an associative approach to exploration of the issue of veiling. Surprising, often contrasting perspectives await the visitor with the complexity of the phenomenon reflected in the variety and disparity of the works on display.

Aesthetic meditations on the material sensuality of a chador are to be found here along with ironic send-ups of Western expectations. Most of the works on display deal with veiling on the meta level. A creative playfulness with erotic symbols also being part of this: if seductive locks are usually concealed beneath a head covering then in the sculpture "Chelgis I" it is the hair itself that mutates into an impenetrable covering that veils and, as it were, armours the entire body. The Iranian artist Mandana Moghaddam, who lives in Sweden, found her inspiration in an old Persian folk tale: "The Girl with the Forty Braids." 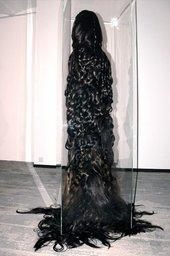 From symbol of female sensuality to sinister body covering: the female hair in Mandana Moghaddam's disturbing sculpture "Chegis I" from 2003 (photo: Stephan Schmidt)

​​Fellow Iranian, Parastou Forouhar's work "Signs" takes the restrictive symbolic power of a chador to extremes through ironic reduction. The artist, who lives in Germany, has designed pictograms that strikingly highlight the contrast between the "enclosed" cocoon of women's lives and the freedom of movement of men.

The striking impact of the veil in Western society was one of the interesting topics at a discussion round to accompany the exhibition. Among the participants were the philosopher Almut Sh. Bruckstein, the sociologist Nilüfer Göle and the Islamic Studies expert Ludwig Ammann who discussed with the audience the topic of young Muslims who choose to wear the headscarf. Is the archaic meaning of the "concealing" veil not being undermined in Europe? Has the headscarf in the European context nowadays not become just the opposite – a means of drawing attention to the wearer, a means for the making of a public "statement", an identity marker for young Muslim women? Bruckstein encouraged visitors to the exhibition to take a closer look at the ambiguities of the veil phenomenon.

Strikingly forceful protest against the suppression of women: a vignette from Parastou Forouhar's "Signs" series

​​"Young women who cover their heads no longer remain invisible, are no longer content to remain hidden away in closed interiors. Now they are pushing out into the public sphere," said Nilüfer Göle in explanation of her research conclusions. It is this shift from the interior to the exterior, from the periphery to the centre, which very markedly distinguishes these "modern" European headscarf wearers from the traditional or even compulsorily veiled women. The self-confidently, assertive headscarf wearers had become the most obvious symbol of Islam's role in contemporary European culture observed the sociologist.

Compulsion and oppression of the veil

The Berlin public also voiced its criticism of the highly intellectual discussion of phenomena, symbols and meta-levels of veiling. Some visitors pointed out that the wearing of the veil was about compulsion and oppression and not about "refusing the male gaze." They pointed to the collective pressure put on many Muslim immigrants in Europe by their families. Göle and Bruckstein responded by insisting that that societal discourse had been given its fair share of debate, whereas the voluntary wearing of the veil was something that had been given much too little attention. "The phenomenon inspires fear and rejection in secular European society, that is why it is being ignored."

Blanket condemnation of the veil was not what was needed, claimed the initiators, but rather the precise observation of the phenomenon and the simultaneous reflection of our own perceptions. Stereotyped thinking would not get us anywhere.

The debate on the oppression of women through the headscarf has run its course, claims Almut Sh. Bruckstein (photo: Stephan Schmidt)

​​This tradition of mistrust and suspicion of the other, formerly the lot of the Jews in Europe, is now being continued in the exclusion of Islamic culture, declared the Jewish philosopher Almut Sh. Bruckstein provocatively. Feminist sociologist, Nilüfer Göle, on the other hand, said that she, too, had felt disconcerted at first by veiled women. But one must deal with the "other" woman on an equal footing. "That is why I decided to carry out research."

The "Mahrem" exhibition has other creative contributions to make to the discourse, its exhibits providing stimulation for emotional and intellectual debate.

Headscarf Controversy
Time for Clear-headed Thinking
Emel Abidin-Algan got to know arranged marriage and the headscarf from personal experience. Here, the daughter of the founder of the Turkish Milli Görüs movement argues for an end to the Turkish government's headscarf ban