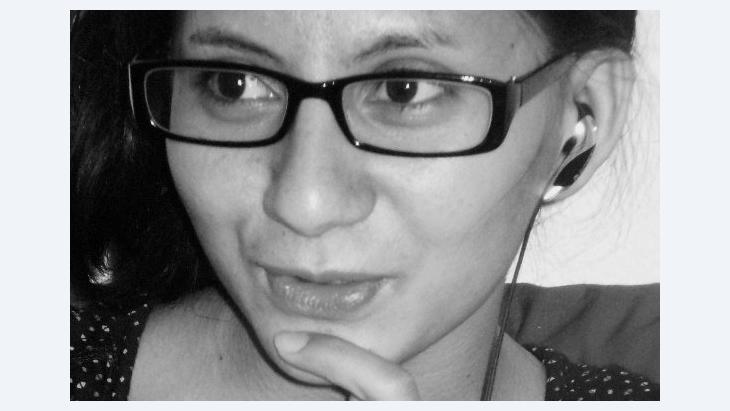 Noorjahan Akbar on Women's Rights in Afghanistan
''Women Are Nobodies''

﻿The West has spoke out for women's rights in Afghanistan. Now, it can't simply pull out of the country, says Noorjahan Akbar, the Afghan human rights activist and co-founder of the independent women's organization "Young Women for Change" in an interview with Martin Gerner

Ms Akbar, the Afghan government and the international community are currently trying to negotiate a solution to the conflict. Preliminary talks have already taken place in Afghanistan. Do negotiations strengthen the hand of the Taliban?

Noorjahan Akbar: I do not claim that the international community supports the Taliban. Yet, ultimately, though not being too overt about it, they say that it is time to end the mission and leave Afghanistan. This, however, is to wrongly assess Afghanistan. If it is just a matter of ending the mission and going home, then this could have been done at the end of 2001 after the fall of the Taliban regime – without having risked so many of our lives and accepting the deaths of countless civilians. 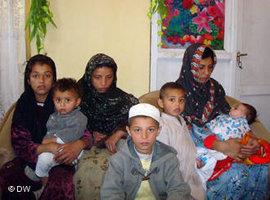 Wrong signal to civil society: "The West committed itself to Afghanistan and brought freedom to women. It can't simply leave now and hand the country back to the Taliban," says Noorjahan Akbar

​​But because Western countries have committed themselves here and have brought a certain degree of freedom to women, they can't simply leave now and hand the country back to the Taliban. And that is exactly what is happening now, although gradually. Up until 2008, an attempt was made to hold the warlords responsible for their actions. There were even attempts to revoke the amnesty law that protects them. But, today, when a four-year-old girl is raped, nobody raises their voice on behalf of the child.

You claim that a misogynist climate reigns even in the centre of Kabul, where you live.

Akbar: Yes. I was recently walking down the street with my sister at sunset, when a car slowly followed us and then directly swerved into me. I ran away. This kind of thing happens almost every week. I hear men on the street say, "Hopefully, the Taliban will come back soon and get even with these prostitutes."

This didn't use to be the case – I could still go to the police for protection. Now, even the police treat me like a prostitute. They stop us in the evening and demand to see my marriage certificate, even when I am accompanied by my brother. All this creates the impression that the government and the international community has completely forgotten about one half of our society.

Foreign women in Afghanistan rarely encounter such difficulties. Why is this?

Akbar: It is because these women have bodyguards and travel by car. You can't compare them to poor Afghan women, who can't even afford a taxi. Only numbers count for international organizations as well as for the government – how many girls go to school, how many women work, and so on. 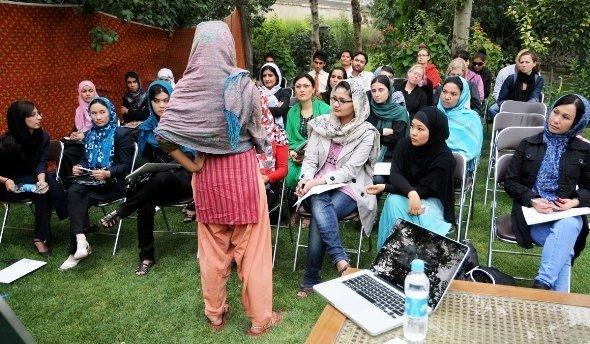 After ten years of fighting discrimination against women in Afghanistan, organizations like "Young Women for Change" fear losing access to education and health care, as well as the right to political participation. Pictured: a debate about the role of women in Islam at the 'Women for Change' center in Kabul

​​What they don't know is what happens to a girl or a woman on the way to school. On average, an Afghan girl attends school no more than between two and four years. During this time in the Afghan school system, they often don't even learn to read and write. And then they are married off, often under pressure.

Akbar: The district in which I live in Kabul is regarded as safe. Educated people live here and there are schools and universities. Despite this, we have already been given three warnings from our landlord since we've moved in. Members of our organization often meet at our home, and, as a result, he and others have accused us of operating an illegal business – a bordello – on the premises.

Just two years ago, no one could have made such a claim so easily. However, now, the so-called reconciliation process has fostered an atmosphere in which those who adhere to the ideas of the Taliban feel that they have the support of the government and even that of the international community.

So, declarations by the international community on supporting women have not been matched by actions? 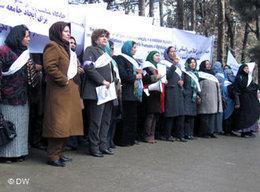 ​​Akbar: In 2001, after the USA led NATO forces "won" the war, the American First Lady, Laura Bush, declared that the goal of the USA was to protect human rights and women's rights. Now, a mere ten years later, if you ask anyone at the US Embassy in Kabul whether these are the top goals of the USA, the answer will be negative. Instead, the main goal of the USA is to negotiate and achieve peace in Afghanistan. The issue of women is thereby ignored. Women are nobodies. It is shocking how things have changed.

The world now has its eye on events in the Arab world. Despite all the differences, is the young generation in Afghanistan inspired by the changes taking place there?

Akbar: In a recent interview, I expressed my opposition to the idea of a peace jirga. Afghanistan's High Peace Council simply can't be transformed into a peace jirga when up to 80 percent of it consists of warlords, the same people who set Kabul ablaze in the 1990s. Now, they claim to speak in the name of peace. It is laughable. It is as if criminals were asked to speak about justice. Any public criticism on our part would result in a rapid attempt to silence us completely.

What actions has your organization, Young Women for Change, undertaken?

Akbar: On 14 July, we publically demonstrated against the harassment of women in society with pamphlets and placards. We wanted to provoke public debate on the issue. A local TV station devoted its Friday broadcast to the issue of harassment on the street. Yet, instead of supporting our case, they blamed the women themselves for the problems. At least our march aroused their attention, as well as that of the international media. We regard harassment as a violation of our human rights. It prevents women from taking part in society.

You are taking great risks.

Akbar: Anything that you do in this country entails risks. And the situation has gotten even worse. If I was raped today, I wouldn't be able to find anyone to support my case in court. The human rights commission would keep silent and I probably wouldn't even find a lawyer willing to defend me. As a woman, the risk of being raped is extremely high every time I leave my home.

Noorjahan Akbar lives in Kabul. She studied for one year at Dickinson College in the American state of Pennsylvania. She is co-founder of the independent grassroots organization Young Women for Change. The group, founded in April 2011, works to strengthen women's rights in Afghanistan by raising awareness and aims to increase women's participation in the country's social and economic life.

Home
Print
Newsletter
More on this topic
Humaira Ameer Rasuli, Head of Medica Afghanistan: ''It's Not Easy Being an Afghan Woman''
Related Topics
Democracy and civil society, Muslim women, U.S. policy in the Middle East, Women in the Islamic world
All Topics

Cries of "Benghazi!" still resonate across the USA ten years after a deadly terrorist attack in Libya killed the U.S. ambassador and three other Americans. Ethan Chorin re-tells ... END_OF_DOCUMENT_TOKEN_TO_BE_REPLACED

Sufism has fluid boundaries. Just like Islam, Sufism is inconceivable without its late antique roots. Then again, it has also exerted an influence on Hinduism. Moreover, the Sufic ... END_OF_DOCUMENT_TOKEN_TO_BE_REPLACED

Journalist Waslat Hasrat-Nazimi was forced to flee Afghanistan with her family as a child and grew up in Germany. To mark the publication of her book "The Lionesses of Afghanistan ... END_OF_DOCUMENT_TOKEN_TO_BE_REPLACED

Just as the Islamic Revolution fundamentally changed Iran 43 years ago and had an impact far beyond the country's borders, the current wave of protests sweeping the country is set ... END_OF_DOCUMENT_TOKEN_TO_BE_REPLACED

One year ago the Taliban returned to power, seizing Kabul; the U.S. and its allies made a panicked exit from the country. Of all the books written on the subject, four stand out ... END_OF_DOCUMENT_TOKEN_TO_BE_REPLACED

Jonas Poher Rasmussen's Oscar-nominated animated documentary “Flee” focuses on the life of a refugee from Afghanistan. Based on a true story, it centres around the question: when ... END_OF_DOCUMENT_TOKEN_TO_BE_REPLACED
Author:
Martin Gerner
Date:
Mail:
Send via mail

END_OF_DOCUMENT_TOKEN_TO_BE_REPLACED
Social media
and networks
Subscribe to our
newsletter