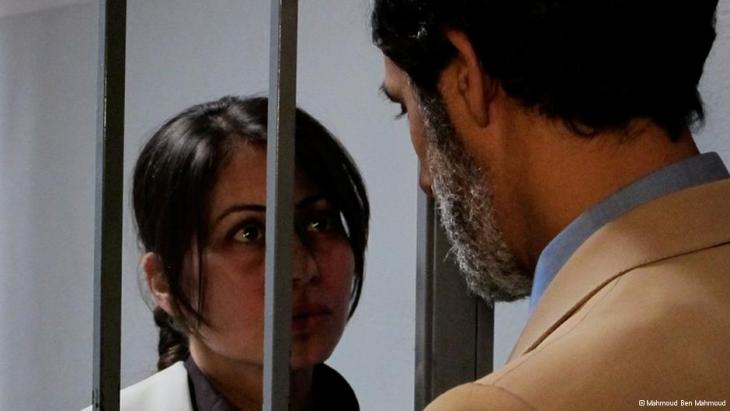 North Africa and the Arab Spring in Film

Between Rebellion and Ideals

North African countries such as Tunisia, Egypt, and Algeria are currently experiencing a boom in cinema that is critical of society and committed to political change. Yet, every country follows its own path. By Aude Gensbittel

Protests by labour union activists, the struggle for human rights, and a university professor who gives up his post in order to defend his ideals – these are the stories related in the Tunisian film "Al Oustadh" (The Professor, photo above). They mirror the spirit of revolution in Tunisia. It was this revolution that toppled Tunisian President Zine el-Abidine Ben Ali in January 2011 and lit the spark for further uprisings throughout the Arab world.

Visions of a filmmaker

The remarkable thing is that the film was already shot in 2010. "Even today, many refuse to believe that I made the film before the revolution," tells Mahmoud Ben Mahmoud. The Tunisian filmmaker was recently in Cologne along with many colleagues to present their latest works at a film festival. The film only materialized, because it depicted historical events, namely the founding of the Tunisian League for Human Rights in 1977 under Tunisia's first president, Habib Bourguiba. 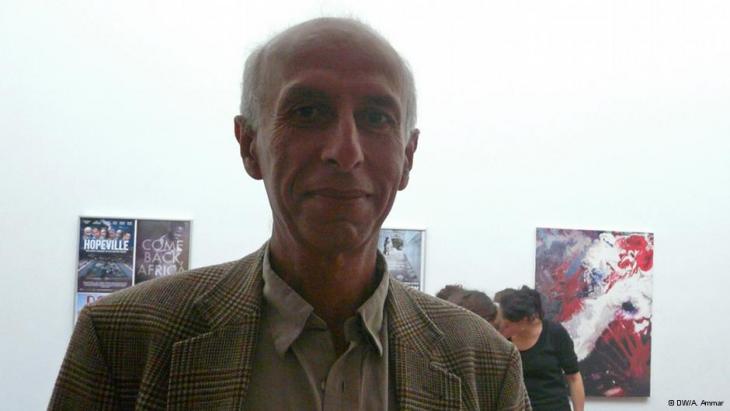 Reason for concern: "The Salafists want to force us to accept a world view that we find completely foreign. They stand for Islamic law in its most brutal form, which fully ignores the humanistic face of the Prophet," Ben Mahmoud says

However, Mahmoud Ben Mahmoud's main concern in "Al Oustadh" was to denounce the intimidation of human rights activists and journalists at the time the film was made. When the film finally appeared in Tunisian cinemas in 2012, the longstanding ruler Zine el-Abidine Ben Ali had since fled the country.

Culture as a means to combat Salafism

Ben Mahmoud plans to devote his next film to the problems facing Tunisia after the revolution. He is less concerned about the current government crisis than the growing influence of radical Salafism. Despite the dismal economic situation in the country and the recent political attacks, Mahmoud Ben Mahmoud nevertheless expressed optimism in an interview with Deutsche Welle. He believes that the crisis can be resolved through dialogue. The country's Islamist-led government does not enjoy the support of the army and therefore cannot cling to power through violence, says Ben Mahmoud.

Much more unsettling is the attraction to Salafism, which could lead to an "Afghanization" of society. "Tunisians have long been Muslims," explains the filmmaker. "Yet, the Salafists want to force us to accept a world view that we find completely foreign. They stand for Islamic law in its most brutal form, which fully ignores the humanistic face of the Prophet." In response, Ben Mahmoud want so use cinema to sound the alarm and contribute to the struggle against violent groups.

Immersing into the world of the Muslim Brotherhood

Events in Egypt have also been investigated in a number of recent films that were screened in Cologne. The documentary film "Istislam – Submission" sheds light on another, more moderate Muslim movement, the Muslim Brotherhood in Egypt. The film was shot in 2012 during the presidential election, which installed Mohamed Morsi as the country's leader. The film depicts not only the political and religious activities of the Muslim Brotherhood, but also highlights the movement's social commitment. "The Muslim Brotherhood displays its presence on the streets," explained director Mona El-Naggar. "Its social network and its charity activities provide the Brotherhood with much more power than if it were a purely political organization." 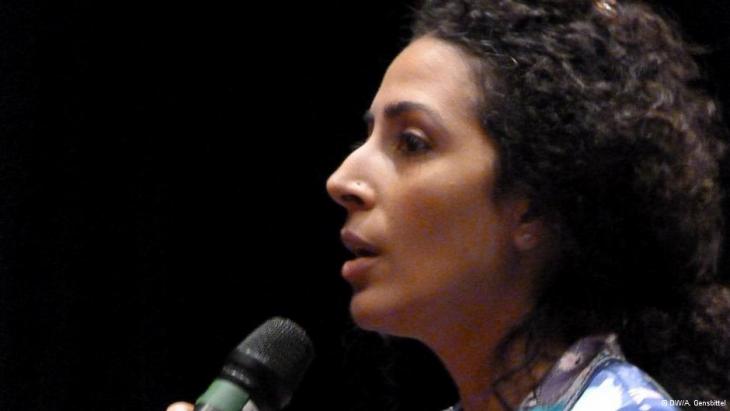 Mona El Naggars "Istislam" depicts not only the political and religious activities of the Muslim Brotherhood, but also highlights the movement's social commitment

In conducting her research, she was able to meet with top representatives of the organization and film many of its events. For example, she took her camera along to a course for young people preparing for marriage. There, the participants learned that it is much more important for young women to be able to cook than to have good marks in school.

Polygamy is extolled as a virtue

They were also taught that polygamy is advantageous for women. Such views may be shocking to a Western public, yet, in conservative Egyptian society, they are still widespread, says Mona El-Naggar. A year after filming was completed, the tide turned against the Brotherhood. President Morsi was overthrown by the army, which assumed power, and then the Muslim Brotherhood was banned.

"To operate as a banned opposition movement under political suppression is a completely different set of circumstances than to assume political power and run a country," says the filmmaker. Many people were disappointed by Morsi. She had the impression that the Brotherhood was more interested in expanding its power base than attending to the needs of the country, improving the economic situation, and re-establishing stability. 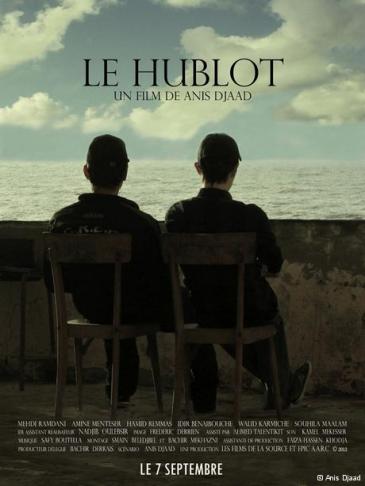 "Society must once again become familiar with the beautiful things in life, such as theatre and cinema," Anis Djaad believes

Neither freedom nor culture

The filmmaker Anis Djaad does not believe that Algeria could experience a political transformation like that of Tunisia and Egypt. "Algeria has already traversed a very difficult period which left thousands of victims in its wake," says the film director, who champions democratic change through peaceful means. The Algerian civil war in the 1990s has left behind deep divisions. The short film "Le Hublot", which Anis Djaad presented in Cologne, tells of the poor outlook for young people in Algeria. "There is not only a lack of individual freedoms, but also of a cultural ideal in society," explains the filmmaker.

"Today, all of the theatres and cinemas have disappeared. The young people just hang around in the streets and are disillusioned." Their frustrations often lead to violence. After the years of terror, the country has now entered into a second phase and requires more freedom, believes Anis Djaad. "Society must once again become familiar with the beautiful things in life, such as theatre and cinema."

The three North African nations of Tunisia, Egypt, and Algeria have experienced radical upheavals. Filmmakers from each of the respective countries have applied their art to observing the current situation. The festival in Cologne has thankfully provided the public with an opportunity to gain a comprehensive image of the reactions by filmmakers to the transformations in their countries.

Decades after the first French nuclear test in Algeria, thousands of victims are still waiting for compensation. To date only 51 claims have been filed under French legislation ... END_OF_DOCUMENT_TOKEN_TO_BE_REPLACED

Few would have thought that Algeria's Hirak protest movement would still be mobilising the masses 12 months on from its first peaceful demonstration. According to Isabelle ... END_OF_DOCUMENT_TOKEN_TO_BE_REPLACED

Having seen a sharp decline in its influence in Tunisia and Algeria, France is eyeing China and Spain’s growing economic presence in Morocco with concern. Is Paris about to lose ... END_OF_DOCUMENT_TOKEN_TO_BE_REPLACED

Insults directed against Egyptian President Abdul Fattah al-Sisi have been particularly prominent among the hundreds of chants by Arab protestors in Algeria, Sudan, Iraq and ... END_OF_DOCUMENT_TOKEN_TO_BE_REPLACED

Political analyst Taqadum al-Khatib argues that Egypt can, in co-ordination with its European partners, develop a common vision to solve the complex conflict in Libya. For this to ... END_OF_DOCUMENT_TOKEN_TO_BE_REPLACED

The upheavals of the past year in the MENA region are arguably as momentous as those of the Arab Spring in 2011. Yet perhaps the biggest difference is that our interest seems to ... END_OF_DOCUMENT_TOKEN_TO_BE_REPLACED
Author:
Aude Gensbittel
Date:
Mail:
Send via mail

END_OF_DOCUMENT_TOKEN_TO_BE_REPLACED
Social media
and networks
Subscribe to our
newsletter