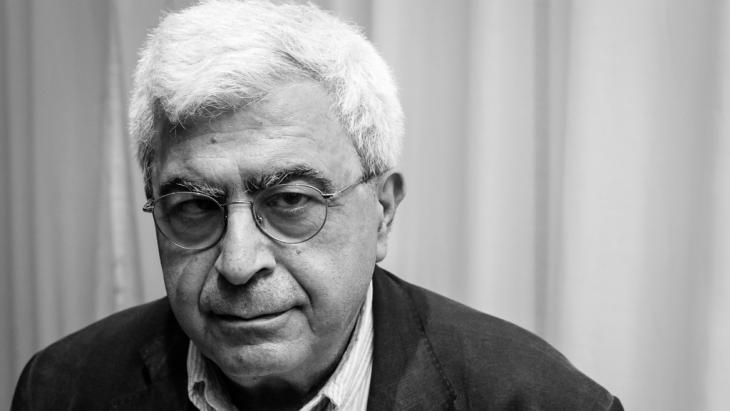 The nightmare of reality

The Lebanese novelist and critic, Elias Khoury, examines the nature of writing in a world rent repeatedly by violence and vicious conflict – and finds hope

I start with a question that I am not sure I can answer, but it's a question that's been troubling me ever since I started to feel that I was living in a mysterious place that lies outside the literary experiences with which, and with whose heroes, I can usually identify. I can trace this back to the beginnings of the Lebanese civil war, when Lebanon's small society exploded due to contradictions that burst its bounds and which it was unable to withstand. So Lebanese society fragmented – and with its fragmentation the dreams generated by literary and political modernity started to collapse.

The shadows of the Lebanese war did not disappear when the end of the war was declared in 1991; in fact the outlook became even more gloomy. It signalled our failure to realise that the Arab countries had been living in a permanent state of disaster since at least 1948, that we were embarked on a disastrous course that still lay ahead of us... and that we finally had to bury our forefathers. We had been living with their corpses, unable to smell them because we had grown so used to the stench of death.

But the question became more problematic when I rediscovered Franz Kafka. Kafka reflects the nightmares of contemporary humanity and his literature is seen as a source of inspiration when exploring the existential isolation of mankind. Re-reading Kafka, however, I was struck by the fact that I could not identify with Kafka's heroes, especially those in ″Metamorphosis″ and ″The Trial″, the literary works that have become symbols for the anguish of modern man.

The crudeness of Kafka's allegory

The more I felt averse to identifying with his heroes, the more my admiration for Kafka's masterly writing and for the magic conjured up by his allegories and metaphors was enhanced. At first I put this aversion down to the crudeness of Kafka's allegory, for even his novel ″The Trial″, on which Sonallah Ibrahim drew for his novel ″The Committee″, seemed to offer no dialogue with the disintegrating worlds in the midst of which I live, while its own nightmarish world was unable to find a place in the fabric of the relationship between the night dreams and waking dreams that fill my imagination.

I only understood the reason for this aversion when I realised I had lived through successive cycles of consecutive disasters that had now reached their climax in the Syrian disaster – a disaster that has turned us into nations of victims and refugees.

Were I to analyse this aversion, I would be striding into a verbal minefield, since it would be wrong to use the word aversion when describing the writings of Kafka. He is rightly recognised as one of the most important landmarks in modern literature, owing to his ability to exploit allegory and metaphor either as an alternative to reality, or as one of reality's possibilities. 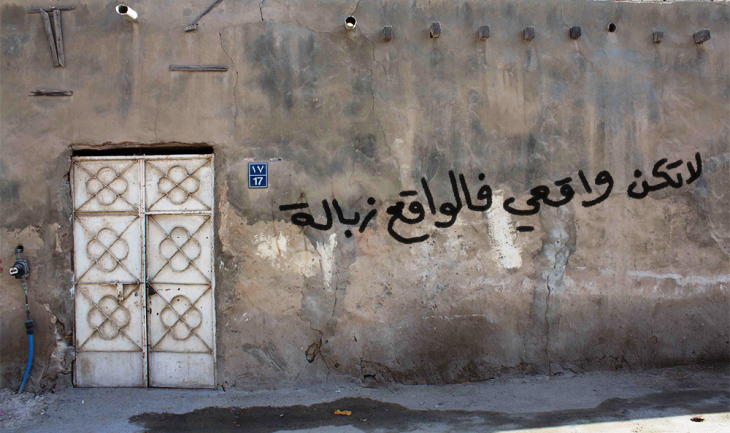 Our present reality: "the despots, the fascists and the Zionists have proved that criminality is more widespread than anyone might have imagined. They have made it clear that literature is unable to match their horrendous madness – and so the nightmare is reality itself, not its literary allegories," writes Khoury

Kafka succeeded in creating a closed world through allegory. In ″Metamorphosis″ and ″The Trial″, tangible reality is transformed into possibilities that draw us back into fable. The words swim in timelessness, allowing the writer to build his metaphors and allegories out of a neurotic illusion that is carved on the invisible walls of fear. Kafka's literature is a shocking reminder of human degradation and the destruction of human dignity in a state where terror is the only prospect.

As I re-read Kafka, I told myself that this Kafkaesque approach might offer us, the heirs to this troubled history, a way to understand our own reality. But I ran headlong into a present reality in which the barriers that once separated men from beasts have been broken down. The despots, the fascists and the Zionists have proved that criminality is more widespread than anyone might have imagined. They have made it clear that literature is unable to match their horrendous madness – and so the nightmare is reality itself, not its literary allegories.

Kafka made the nightmarish allegory one of the possibilities of the present, but we are living an unadorned nightmare that is more horrific than any symbolic version.

Kafka was the 'prophet' of the Holocaust and the harbinger of the gulag, but what becomes of prophecy when, if it comes true, it exceeds all probabilities? Kafka's question, which opened the last century, is the question of the allegory that turns into a nightmare. But what is the question we have to answer here today in the Arab world, not to mention out there in the world that has become a land of misery, emigration and racism?

I do not want to be a theorist of the abyss, theorising is not my profession. We novelists find ourselves in the midst of all this chaotic bloodshed and horror, each one of us seeking the language that best suits us and our own approach to interpreting our time.

I began with Kafka to get to the question that keeps me awake, a question rooted in the relationship that words have with silence: how do we write words that speak – and how do we wall our text in with silence in order to write? This is the opposite of the Kafkaesque question: we have to write in pain the language of pain and transform the nightmares of history that we are living through into a metaphor that celebrates life amidst death.

Only path to life and renewal

The nightmare of the present takes precedence over the allegorical nightmare, draining the allegory of all meaning and inviting us to write it down in the language of the victims and their sufferings, proposing a new literary approach to produce metaphors from an accumulation of stories, transforming the latter into into mirrors for those stories that either precede or come after them.

Famine and the disasters of the last century were written down only as part of an instrument of oblivion wrapped in the symbols of revival: writing them down therefore produced a silence that used words to conceal the pain. Our modern disasters, however, are the domain of our words, which seek meaning in the midst of language's silence and inability to speak. Through our stories, we seek to transform this tension between silence and speech into a celebration of life.

As you can see, the task looks difficult, if not impossible. Isn't impossibility one of the characteristics of literature? We repeat words so that we don't run out of them, as the ancients said, but, whatever tricks it may possess, repetition itself is a gateway to running out of words and to death. Yet, at the same time, it offers the only path to life and renewal.

How are living words born from the dead?

This is a question to which we do not have the answer, but we can find it if we journey to the farthest reaches. The game of farthest reaches is not only a journey to new places but, first and foremost, a rediscovery of the place in which we found ourselves suspended, desperately hanging on to its stories.

We don't make the answers: we find them and when the answer is finally written down, we find it resembles the question, because writers, as I see it, are just readers who rewrite the story they have read in the eyes of others. The eyes are the space and the mirrors of writing; all we have to do is discover the alphabet of the eye, in order to reach the y of humanity, which is hidden beneath the shards of time.

I do not believe that writing is an act of despair. On the contrary, it lies beyond despair, when a portal opens onto the darkness that is mixed with shades of light. In this darkness the ink lights up our souls and takes us to a place where we are both witness and agent, where witnessing broadens the horizons of the human situation – defending man's right to live and dream, to rip the veil off taboos and to resist military and religious tyranny.

Arab novelists are right to celebrate the status that the novel holds in contemporary Arab culture, but we should not forget that this status is old and is not the product of a ″prize-based″ moment. That is no reason for pride. On the contrary it calls on us to be humble and to develop the lyricism, musicality and drama of the novel – and to point out that genres of literature and art overlap in a cultural weft capable of withstanding death, tyranny and our petroleum-fuelled moral collapse.

Twelve million Syrians are dependent on humanitarian aid, a sombre figure that conceals much suffering and high costs, of which Europe bears 80%. With an aid shortfall looming, ... END_OF_DOCUMENT_TOKEN_TO_BE_REPLACED

Mikhal Dekel’s father was part of a contingent of Jewish children who went on an odyssey from Poland to Iran as a result of the Holocaust. Dekel has now written a book exploring ... END_OF_DOCUMENT_TOKEN_TO_BE_REPLACED

The protests against police violence in the USA have triggered a discussion in Germany about discrimination, immigration and the country's image of itself. Why are people who do ... END_OF_DOCUMENT_TOKEN_TO_BE_REPLACED

In the age of corona, Ankara's regional power strategy is twofold: on the one hand, Turkey is engaged in a charm offensive to revamp its political image, which has suffered lately ... END_OF_DOCUMENT_TOKEN_TO_BE_REPLACED

The Sudan Partnership Conference on 25 June is seeking funding commitments to rebuild Sudan’s desolate economy. As Annette Weber argues, the crucial point will be aligning ... END_OF_DOCUMENT_TOKEN_TO_BE_REPLACED

At a time of widespread international protests against racism, triggered by the killing of George Floyd in the United States, there are calls to remove the term race from the ... END_OF_DOCUMENT_TOKEN_TO_BE_REPLACED
Author:
Elias Khoury
Date:
Mail:
Send via mail

END_OF_DOCUMENT_TOKEN_TO_BE_REPLACED
Social media
and networks
Subscribe to our
newsletter