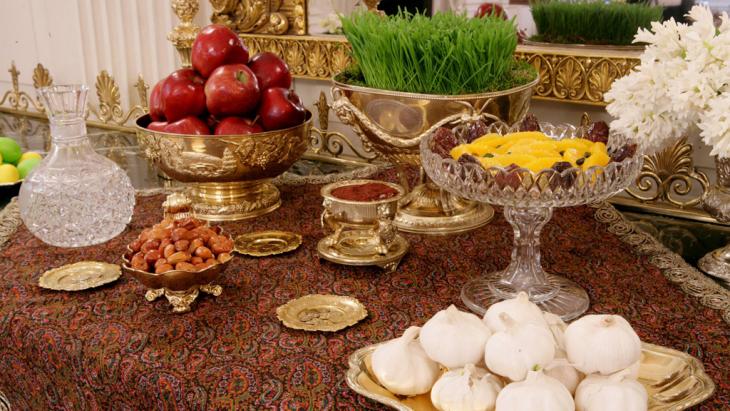 Nowruz: one of the world's oldest festivals
"My paleness is yours, your colour is mine!"

The Iranian New Year celebration "Nowruz" has been a feature of Persian culture for more than 2,500 years. The roots of this festival lie in the ancient Persian religion of Zoroastrianism. Today, more than 300 million people all over the world celebrate Nowruz. Shohreh Karimian looks back at the history of this new year celebration and explains some of its customs

"Eyd-e Nowruz", which literally translates as "celebration of the new day", is an age-old festival marked every year at the start of spring, at the equinox on 20 or 21 March. When daylight triumphs over the darkness of night, nature regenerates itself and the old and burdensome falls away, the Persian New Year begins. Nowruz is a festival of joy, hope and the family that was celebrated even before the era of the Persian Achaemenid Great Kings, and is deeply anchored in ancient Persian, pre-Islamic culture.

The "Shahnameh" (Book of Kings), which was written in the eleventh century by the great Persian poet Ferdowsi and contains the historical and mythological history of Iran in verse form, traces the origins of the Persian New Year back to the rule of King Jamshid, who Zoroastrian sources say saved humanity from a deadly winter. Jamshid also built a throne out of precious stones and had himself raised up to the heavens by demons. According to Iranian mythology, all terrestrial creatures gathered, expressed awe at this "elevation" and named the day "Nowruz". This day was the first day of Farvardin, the first month of the Persian calendar.

For the Iranian painter Naghmeh Roomi, who has lived in Germany for 17 years, the Persian New Year celebration is a very important event. "Everything smells good, of spring, and there's a real sense of renewal and regeneration. For me, Nowruz is about leaving the old year with all its positive and negative aspects behind and expecting the new year to be filled with happiness and positive things," she says.

This is also an omnipresent approach among the Zoroastrians, who believe in the dual existence of good and evil in the world. Nowruz is not just a New Year festival, but also a rebirth of nature and a symbolic renewal of the human essence. When dawn conquers the night, evil and darkness are also overcome by light and wisdom.

The celebrations last for 13 days and can be divided up into separate phases. Around two weeks before Nowruz, people plant out grains of wheat or barley, or lentils and allow them to grow on a small patch of ground to create what is known as a "sabzi".

A New Year's clean-up, shop and the removal of old, damaged objects are right at the top of the to-do list in the run-up to Nowruz. Living rooms are decorated with what are known as "Sofre-ye Haft-Sin" tables (set with the seven "S"s). The "seven S's" are food and objects beginning with the letter "s", all of which have a symbolic meaning:

- sabzi (the sprouting grains), which represents rebirth and fertility,

- sir (garlic) and somaq (sumac spice), which symbolise health in the New Year,

- serkeh (vinegar), which represents patience and a long life and 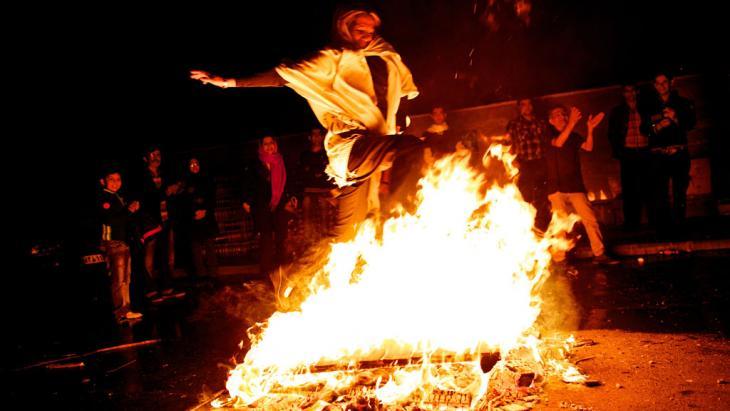 On the night before the last Wednesday of the old year, a fire is lit using thorn bushes. People gather around these small fires and jump over them, repeating the traditional saying: "My paleness is yours, your colour is mine!" which means that the person jumping over the fire is leaving behind the pallour of the old year and taking on the colour and strength of the fire for the new year

Putting out more than seven items is not frowned upon. On the contrary: to ensure a prosperous and successful new year, the selection may also include sangak (a special bread) and sekeh (silver coins), for example. And no New Year table setting would be complete without a mirror and a candlestick – even though the names of these objects do not begin with an "s". The Haft Sin table is also set with decorated eggs, which symbolise rebirth and fertility, and goldfish in a glass bowl.

The second phase begins in the night before the last Wednesday of the old year. During what's known as the "Chaharshanbeh-Soori" night, a fire is lit using thorn bushes. Fire plays a central role in Zoroastrianism. It has a divine symbolism and as a sacred element, has the power to create life, but also to destroy.

People gather around the flames, which are reminiscent of an Easter bonfire, and jump over them, repeating the traditional saying: "My paleness is yours, your colour is mine!" This consigns the afflictions and illnesses of winter to the flames, and allows the person jumping over them to absorb the energy of the fire. It is a joyous occasion, with people celebrating together and eating dried nuts and fruits (ageel).

The turn of the year and the start of spring

On the day of Nowruz itself, families gather around the "Haft Sin" table, read from Ferdowsi's "Shahnameh", Hafez's Divan or the Koran, and wait for the turn of the year. And then the countdown begins: "Dah (ten), noh (nine), hasht (eight)...sefr (zero)!" – the sound of cannon shot then symbolises the start of the new year.

"I really like Nowruz, because there's always loads of presents," says 12-year-old Iranian Nozhan Mirhosseini. "My parents put some cash inside the book of the poet Hafez, and the money is distributed at midnight. Sometimes you might also get toys as gifts. Of course, that's great too!" says Nozhan.

The thirteenth day after New Year marks the last high point and, therefore, the end of the Nowruz celebrations. Under the pretext that the number 13 brings misfortune and that one shouldn't, therefore, stay at home, many families in Iran organise picnics in the countryside as a way of enjoying Nature's awakening together.

On this day, which is known as "Sizdah be-Dar" (literally translated as "13 to the door", or in other words "getting rid of the 13"), the grimness of winter is replaced by the goodness of spring. A lengthy excursion, including delicious food and board and ball games, usually marks the end of the celebrations and the start of the New Year.

"Of course, you can't compare Nowruz in Germany with the celebrations in Iran," says Naghmeh Roomi. "The atmosphere is totally different there: in Iran, you can buy items for the festival everywhere, and everything points to the upcoming celebrations – you could say it really smells of Nowruz! In Germany, you have to create this mood yourself, to keep this important tradition alive."

Very different Western reactions to the suffering in Ukraine and the Arab world show that there is a profound rift among cultures. Essay by Michael Young END_OF_DOCUMENT_TOKEN_TO_BE_REPLACED

The documentary "Nadia" tells the incredible story of Nadia Nadim, who was forced to flee from the Taliban as a child and became a football star. By Annabelle Steffes-Halmer END_OF_DOCUMENT_TOKEN_TO_BE_REPLACED

Three award-winning female directors appeal to the international film industry to save Afghan cinema. Supporting women filmmakers is more important than ever. By Christine Lehnen END_OF_DOCUMENT_TOKEN_TO_BE_REPLACED

Russia's ranking on the World Press Freedom Index has fallen again over the Kremlin's wartime censorship of the Ukraine conflict. From Myanmar to Mexico, journalists continue to ... END_OF_DOCUMENT_TOKEN_TO_BE_REPLACED

Ideally, those Europeans currently welcoming Ukrainian refugees would show the same sympathy to Syrians, Afghans and others fleeing war beyond the continent. But, argues Ian ... END_OF_DOCUMENT_TOKEN_TO_BE_REPLACED

END_OF_DOCUMENT_TOKEN_TO_BE_REPLACED
Social media
and networks
Subscribe to our
newsletter