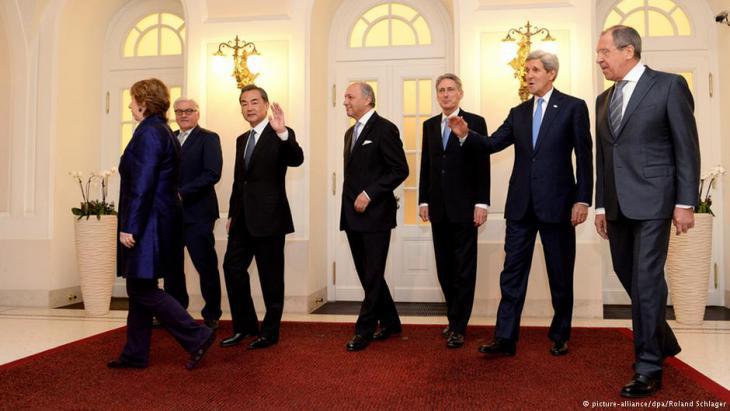 People in Iran in particular have been anxiously following the progress of the nuclear negotiations in Vienna. As if it were a sporting event, everyone made sure not to miss any new development and to keep a close eye on the score. Ultimately, however, things ended as they so often do: the match went into extra-time. By Adnan Tabatabai

After intense negotiations, Iran and the P5+1 states (USA, Russia, China, France, the United Kingdom and Germany) have agreed to extend until 1 July 2015 the Joint Plan of Action (JPOA) adopted one year ago. The aim is to agree on a Comprehensive Joint Plan of Action (CPJOA) that will resolve the nuclear dispute by this new deadline. To this end, the parties have also agreed to come up with a so-called "political framework" by 1 March.

Until then, Iran will continue narrowing its nuclear programme. It will reduce its Research and Development activities and not fuel its more modern IR-5 centrifuges. Additionally, Iran has agreed to allow the International Atomic Energy Agency (IAEA) to step up inspections of its nuclear facilities.

In return, part of the international sanctions – albeit only a small part – will continue to be suspended in accordance with the JPOA. Iran will also receive US$700 million of its frozen assets per month (US$4.9 billion in total).

It is unclear why more could not have been achieved. The foreign ministers of the countries involved were not willing to provide any concrete explanations. Instead, they tried to keep up the positive momentum by emphasising successes, shared interests and commitment.

One critical point of the talks was undoubtedly the fact that the US is not able to react appropriately to the concessions offered by Iran. Tehran demands the immediate lifting of US, EU and UN sanctions, something US President Barack Obama in particular is unlikely to manage as he would hardly be able to get it through Congress.

It is doubtful that this particular challenge will be easier to resolve in seven months time. Moreover, it is likely to become more difficult in the immediate future to promote patience and confidence over prospects of a resolution. Despite the achievements that have been made, major steps still need to be taken before a CJPOA can be reached. 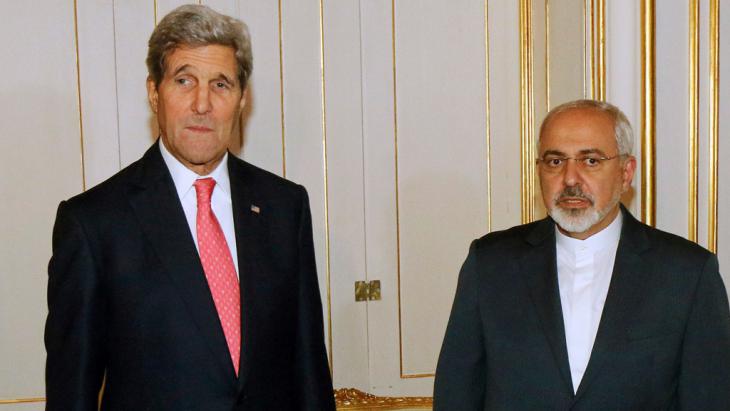 US Secretary of State John Kerry (left) and Iranian Foreign Minister Javad Zarif are pictured before a meeting in Vienna on 23 November 2014. After intense negotiations, Iran and the P5+1 states decided to extend until 1 July 2015 the Joint Plan of Action (JPOA) adopted a year ago

People in Iran in particular had high hopes this dispute could be resolved by the deadline of 24 November 2014. In contrast to people in the P5+1 states, Iranians were following the talks very closely. They were very hopeful that an agreement would finally be reached this time. It was very much a case of the wish being father to the thought.

Right across the social spectrum, Iranians are completely fed up with the nuclear dispute. Even those who hail Iran's nuclear programme as "prestigious" and a project of "resistance against arrogant world powers" long for the day when their country is no longer seen exclusively through the lens of Iran's nuclear portfolio.

This would pave the way for improved international relations, which would in turn give Iran's economy a proper boost. The crippling sanctions, which since their introduction have hit the people of Iran harder than the political elite, would finally be lifted – albeit only gradually.

Reconciliation with the international community would translate into a de-radicalisation at domestic level. This is exactly what President Hassan Rouhani promised to do in his election campaign and what he was elected for. A deal in this area would strengthen his presidency, and the prospects of moderates and reformists getting a majority in the parliamentary election in early 2016 would be improved.

But can Iran's people wait that long? An Iranian saying goes "A bit more patience, dawn is near!" Naturally, those who are politically educated and engaged remain optimistic. They know that significant policies are a long time in the making and that a nuclear deal that was thrashed out over a long period will be the more unshakeable, more solid deal.

But those Iranians who are directly hit by the sanctions regime on a daily basis and are confronted with the country's tense political climate have little time for the symbolic meaning of a photo showing the foreign ministers of the P5+1 states, the EU's foreign policy chief Catherine Ashton and Iran's foreign minister, Javad Zarif together, underlining the continuation of their diplomatic efforts. This photo and press statements emphasising that the extension of the deadline is not just an emergency solution will not suffice for those who yearn for an end to crippling sanctions. 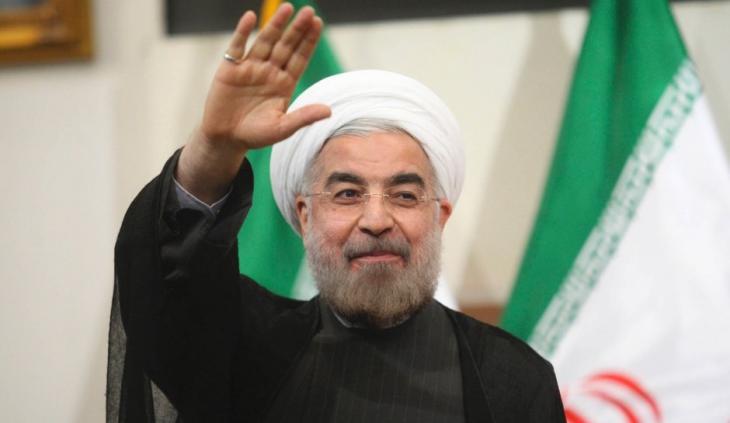 Iranian President Hassan Rouhani (pictured here) can be confident that he has the support of the Supreme leader and the country's conservative elite. "Even if the negotiations fail, Rouhani and Zarif would remain in office and would be celebrated as having resisted reaching a deal at any price and having defended Iran's interests," writes Adnan Tabatabai

Moreover, critics of a nuclear deal will seize the moment and declare that they had been right all along and had known that the negotiations would not bear fruit. Their scepticism is particularly directed at the US. For them, the "Great Satan" can never be trusted. Even if a deal was reached, they are convinced the US would not live up to its obligations.

But as loudly and as publicly as these sceptics, who call themselves "the concerned", criticise the negotiations (they regularly hold conferences and have even set-up a website dedicated to this issue), the Supreme Leader Ayatollah Ali Khamenei is steadfast in his support for the negotiating team led by Foreign Minister Javad Zarif.

During a speech to members of the Bassij Organisation, Khamenei recently stressed that he will support the extension of the talks, just like he supported the negotiations. Earlier this week, in another meeting with Sunni and Shia clerics from the region, he emphasised that the world powers had not succeeded and would never succeed in bringing Iran to its knees. In making reference to the nuclear negotiations, Khamenei legitimises Zarif's team to defend Iran's interests.

This is the solid domestic basis on which Iran's negotiating team can build during negotiations. If a deal is reached, Zarif and Rouhani will be able to champion that deal at home and get it ratified in parliament. 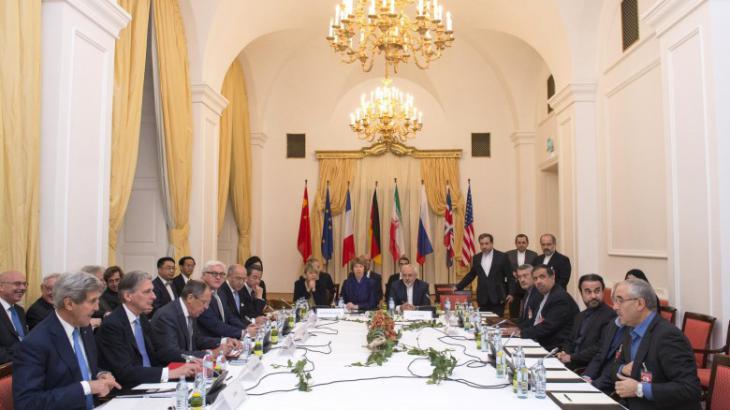 Although the foreign ministers of the countries involved in the negotiations in Vienna were keen to play up the progress made, the fact remains that an agreement could not be reached by the agreed deadline

The consequences of a possible failure

In contrast, the P5+1 do not seem to be in such a position. It could well happen that US Secretary of State John Kerry agrees to a final nuclear agreement, but that Congress subsequently rejects it. The lifting of sanctions (not just their suspension through presidential waivers), which is a real deal-breaker for Iran as it is its key demand in return for its own concessions, is only possible with the approval of Congress. This being the case, it is indeed possible that negotiations could yet fail.

For some observers, a failure of the talks would deal a fatal blow to President Rouhani and could cost him his presidency. Foreign Minister Zarif would probably be removed from office. This is the kind of impression one gets when one considers the above-mentioned ultra-conservatives to be the decisive factor.

If, however, one follows the discourse at the highest levels, it becomes clear that even if the negotiations fail, Rouhani and Zarif would remain in office and would be celebrated as having resisted reaching a deal at any price and having defended Iran's interests.

Political heavyweights such as Ayatollah Ahmad Jannati, chairman of the Guardian Council, General Hassan Firouzabad, chief of staff of Iran's Armed Forces, or Ayatollah Sadegh Larijani, chief of the Judiciary, take a similar line to the Supreme Leader on this subject.

Whether or not this support would also resonate among the people of Iran if no deal is reached, remains to be seen. For them, there is much more at stake here than just the nuclear portfolio.

Adnan Tabatabai is a political scientist and Iran expert. He currently lives in Berlin.

Home
Print
Newsletter
More on this topic
Nuclear talks with Iran: Historic step on a rocky roadIran's nuclear programme: Hope must go on The Iranian president and his political opponents: Rouhani under fire and on fire
Related Topics
Ayatollah Ali Khamenei, Hassan Rouhani, Iranian nuclear programme, Islam and the West, U.S. policy in the Middle East
All Topics

In "Iran. Die Freiheit ist weiblich", journalist Golineh Atai describes the dogged resistance of courageous Iranian women against the Islamic Republic and the mullahs who have ... END_OF_DOCUMENT_TOKEN_TO_BE_REPLACED

Egyptian authorities have Mada Masr in their sights once again after critical reporting. But the editor of the country's last independent news source is adamant they will continue ... END_OF_DOCUMENT_TOKEN_TO_BE_REPLACED

Like Christianity, Europe's history is one of migration. Both have strong roots in the Orient and in cultures thousands of years old. Cultural historian Bernhard Braun invites us ... END_OF_DOCUMENT_TOKEN_TO_BE_REPLACED

Russia is leaving no stone unturned in its attempts to make the Islamic Republic an ally in the war against Ukraine. Fortunately for Vladimir Putin, the mullahs in Tehran are ... END_OF_DOCUMENT_TOKEN_TO_BE_REPLACED

Attitudes towards Rohingya people in Myanmar have shifted, due in part to the civil war. But this does nothing to alleviate their misery. By Rodion Ebbighausen END_OF_DOCUMENT_TOKEN_TO_BE_REPLACED

END_OF_DOCUMENT_TOKEN_TO_BE_REPLACED
Social media
and networks
Subscribe to our
newsletter