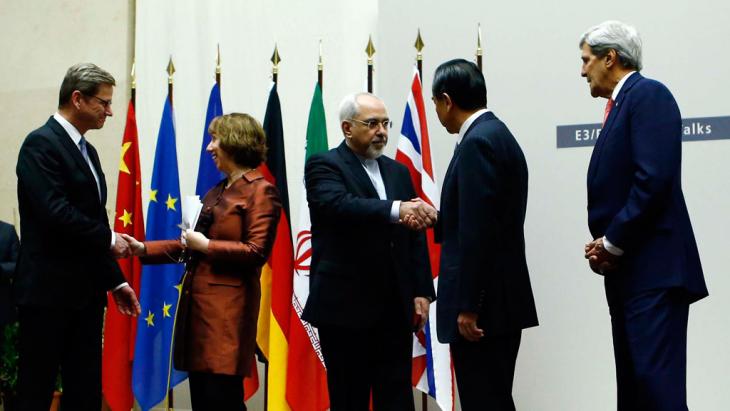 Nuclear Talks with Iran
Historic Step on a Rocky Road

The interim deal agreed at negotiations in Geneva is a breakthrough that would have seemed impossible just six months ago. By permitting stricter controls and limiting uranium enrichment, Iran has made concessions. But sharp criticism from Israel shows that the path to a final agreement is still strewn with obstacles. By Ulrich von Schwerin

After five days of negotiations over the Iranian nuclear programme, the moment finally came: As the foreign ministers of Iran and the five UN veto powers plus Germany announced in Geneva early on Sunday morning (24.11.2013), an agreement was reached to partially freeze Iran's nuclear programme in return for sanctions relief.

"For the first time in almost a decade, we've halted the progress of the Iranian nuclear programme," said US President Barack Obama. Key elements of the programme were also withdrawn.

So now it all appears to have worked out: After the negotiations began in mid-October with cautious optimism and an agreement was within reach during the second round of talks in early November, last weeks' meetings again appeared to have reached a dead end.

While all parties at the table affirmed their positions time and time again, Israeli Prime Minister Benjamin Netanyahu utilized all channels to warn that a "very, very bad deal" was about to be struck in Geneva.

It was also not helpful that at this juncture, shortly before the start of the new round of talks last Wednesday (20.11.2013), Iranian Supreme Leader Ayatollah Ali Khamenei cursed Israel as the "rabid dog of the region" and as a "true threat to the world". Positive resonance in Iran: Following the agreement, President Hassan Rohani spoke in Tehran: "The accord serves all countries of the region and world peace"

While he may have expressed his fundamental support for the talks, he also stressed "red lines" that the negotiators should not cross. When the talks began in Geneva, all the previous dynamism that had developed since Iranian President Hassan Rouhani took office appeared to have fallen flat again.

This makes the agreement all the more gratifying: It foresees that for an initial period of six months, Iran will halt uranium enrichment to 20 percent purity and dilute existing stocks of highly enriched uranium or convert it into less dangerous oxide powder. Tehran has also agreed to permit daily inspections of its nuclear sites and pledged not to install any further centrifuges or put them into operation. It is also halting construction work on the heavy water plant in Arak that (with a reprocessing plant) could provide a long-term supply of plutonium for the development of nuclear weapons.

Although the text of this agreement does not contain the explicit recognition of Iran's right to enrich uranium, as demanded by Iran, it permits Tehran to continue enriching uranium to 3.5 percent purity to manufacture fuel rods for its nuclear power facility in Bushehr.

Iran has also not been required to give up its two enrichment facilities in Natanz and Fordo. As well as a suspension of trade restrictions for gold, petrochemical products and car and plane parts, the deal also releases just over four billion dollars in Iranian oil sales revenues from frozen foreign accounts.

Obama spoke of a "first step", with which a great deal had already been achieved. The fact that not only are the US and Iran sitting down together at the same negotiating table, but also that they have been able to agree on tighter controls and the halting of controversial elements of Iran's nuclear programme, does indeed represent huge progress.

Even just six months ago, talks of this nature let alone an agreement of this nature appeared inconceivable. Experts at the Arms Control Association have hailed the accord as an "historic breakthrough" and an "unequivocal, important success". But Israel's Prime Minister Netanyahu on the other hand issued sharp criticism. He said Iran had only made "cosmetic concessions" and was now a significant step closer to being able to obtain the "most dangerous weapon in the world".

In what could be interpreted as an undisguised threat of military action, he said Israel would not be bound by the agreement. Netanyahu has for several weeks now been demanding that Tehran be put under greater pressure to achieve more significant concessions. In his view, the goal must be that Iran give up its right to enrich uranium entirely.

But this is a completely unrealistic demand. Not only is a ban on uranium enrichment questionable, because like Iran many other nations view enrichment as their right in accordance with the Non-Proliferation Treaty (NPT). Tehran has also categorically ruled out a complete halt to enrichment. Anyone who believes that tighter sanctions would persuade Iran to give up its two enrichment facilities with a total of 19,000 installed centrifuges, is misjudging the situation.

No threat to the regime

On the one hand the sanctions could hardly be more severe, and on the other – while they are having a devastating effect on the economy and the population of Iran – they continue to pose no threat to the regime. While there is great displeasure among ordinary Iranians at high inflation rates and the decline in currency values, opinion polls reveal that they lay the blame first and foremost at the foot of foreign governments. Even for moderates and reformers, the nuclear programme is a matter of national honour, which is why although they will accept a compromise, they will not tolerate capitulation to the West. 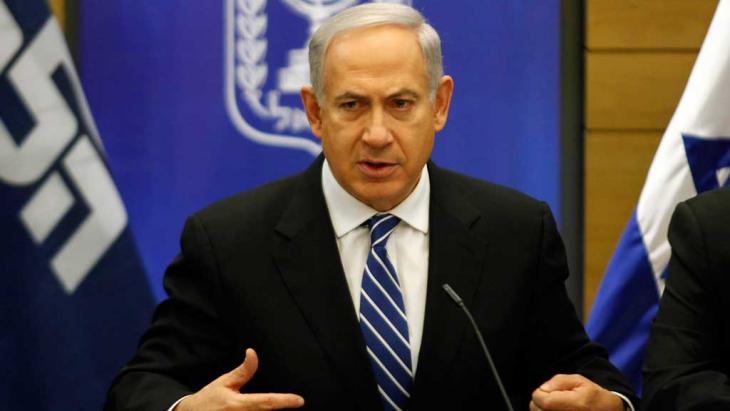 Israel lashes out: Prime Minister Benjamin Netanyahu described the deal over Iran's nuclear programme as an "historic mistake". He believes it will "make the world more dangerous".

These points should be borne in mind by all those involved in hammering out a comprehensive and final agreement. Those who demand too much could end up with nothing. Not that a final agreement will be easy to reach.

In Iran, Khamenei's conservative allies view the talks with scepticism. They are mistrustful of the West and regard the nuclear row as a pretext for efforts to subjugate their nation. The Revolutionary Guard also benefits from the sanctions and fears any détente could result in a loss of influence.

Whether or not they are prepared to honour the interim agreement and support continued negotiations will depend on what's in it for them and for Iran. The sanctions relief granted thus far is highly limited, while the painful oil embargo and the financial sanctions that are having a devastating effect on trade remain in force.

Iran is also only recouping a fragment of its oil revenues frozen in foreign accounts. Much more must happen in this regard – and much more can happen without reducing the pressure on Tehran.

In the West, on the other hand, the greatest threat to continued negotiations is first and foremost being posed by Israel. Netanyahu, who has always lived with a permanent sense of threat, is fighting tooth and nail against an agreement and trying to make the world believe that if Iran cannot be forced to give up its nuclear programme, then it would be better to have no deal at all. Israel has already begun lobbying US members of congress, some of whom in any case take a sceptical view of the rapprochement with Iran, for a tightening of sanctions.

But to impose more severe penalties while Iran is acting to curb its nuclear programme would rightly be viewed as an infringement of the terms of the deal. And it must be clear that in case of failure, it will be years before there can be any prospect of a resumption in talks.

From this point on, negotiations will continue to be a delicate balancing act. But if they eventually succeed in further curbing uranium enrichment, reducing the number of centrifuges and placing nuclear sites under permanent monitoring, this would be a huge gain – for Israel too.

Transdlated from the German by Nina Coon

Tourists have been returning to Tunisia, Egypt and Morocco. But, given the global uncertainty caused by the Ukraine war, will the comeback be enough to save a struggling sector, ... END_OF_DOCUMENT_TOKEN_TO_BE_REPLACED

The highly controversial Indian blockbuster "The Kashmir Files“, on the exodus of Kashmiri Hindus in the 1990s, is characterised by unilateral representations, negative ... END_OF_DOCUMENT_TOKEN_TO_BE_REPLACED

"Flugt" is the world's first museum dedicated to the stories of those forced to flee. The new museum, which focuses on the fates of refugees then and now, is housed in a former ... END_OF_DOCUMENT_TOKEN_TO_BE_REPLACED

"Finding Home", the second album by Syrian-born, UK-based musician Maya Youssef, works through feelings of loss and destruction until its music reaches a place beyond war and ... END_OF_DOCUMENT_TOKEN_TO_BE_REPLACED

END_OF_DOCUMENT_TOKEN_TO_BE_REPLACED
Social media
and networks
Subscribe to our
newsletter