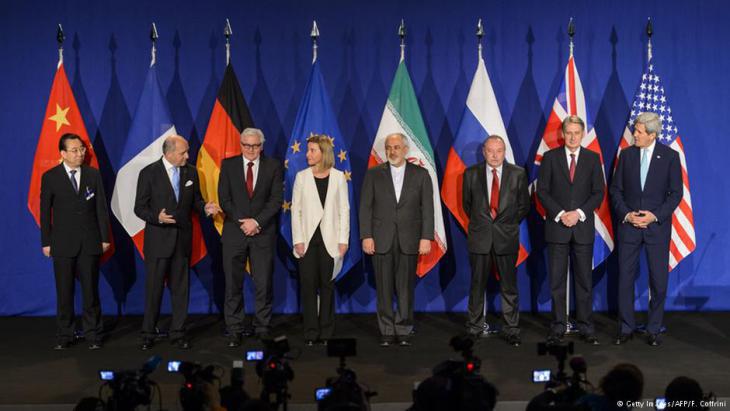 The framework agreement reached at the end of the long negotiations over Iran's nuclear programme in Lausanne goes much further and is much more specific than latterly expected. Iran has pledged to drastically reduce uranium enrichment and made clear concessions concerning the duration of the planned deal and in the phased lifting of sanctions. By Ulrich von Schwerin

The road was long, and up to the last, the negotiations over Iran's nuclear programme could have gone either way. In the days leading up to the deadline the Islamic Republic and the five UN veto powers plus Germany set themselves to reach a basic agreement, there were signs that some kind of deal would indeed be reached. But as talks in the Swiss city of Lausanne were extended yet again late into Tuesday night and early Wednesday morning, there was widespread scepticism that any accord would be enough to issue more than just a vague declaration.

But the Plan of Action then presented to the world on Thursday evening, two days after the deadline, was indeed the long hoped-for breakthrough. Not only is the plan considerably more concrete than had been latterly feared, it goes much further than many observers in recent days had been expecting. The agreement, which is now to be hammered into a comprehensive deal by the end of June, contains far-reaching concessions by Iran over key issues from uranium enrichment to the duration of the deal.

Individual details of the agreement include a statement of intent from Tehran that for 15 years, it will reduce its installed enrichment centrifuges from 19,000 to 6,000 first generation machines, of which only 5,000 will be used for uranium enrichment at the Natanz facility. At the second enrichment facility, Fordow, which is buried deep within a mountain, the number of centrifuges will be reduced to 1,000, to be used exclusively for research purposes. Under the agreement, all other centrifuges will be decommissioned under the supervision of the International Atomic Energy Agency (IAEA).

If the deal is signed, Iran will in future only be allowed to enrich uranium to 3.67 per cent, and any remaining stockpiles of uranium enriched to a higher level will largely be disposed of. The half-finished heavy water facility near the town of Arak is to be modified so that it cannot produce any weapons-grade plutonium. Spent fuel rods from the reactor will be shipped out of the country. In addition, Tehran says it will not build a reprocessing site and any new enrichment facilities or heavy water reactors for a period of 15 years. 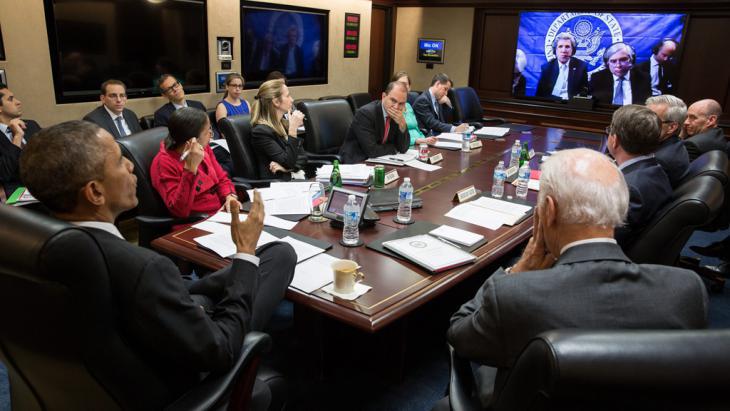 A tough struggle to find a compromise solution: following marathon talks with Iran in Lausanne, the UN veto powers US, China, Russia, France and Britain plus Germany arrived at a framework agreement to end the nuclear row. Iran must reduce its nuclear programme, and the US and EU must lift their sanctions in return. A comprehensive deal will be fleshed out by 30 June

A commitment to prohibit nuclear weapons

In addition to these commitments, the Islamic Republic is also pledging to make its nuclear sites, uranium mines and associated production facilities accessible for comprehensive inspections by IAEA inspectors for up to 25 years. Iran also intends to ratify the Additional Protocol, which would afford greater inspection rights to the IAEA. The Iranian leadership is also pledging to notify the IAEA of any new facilities in good time. Even once the term of the deal has expired, Iran will remain a member of the non-proliferation treaty that allows for IAEA inspections and prohibits the development of nuclear weapons.

In return for these concessions, the EU and US oil embargo will be lifted, and other financial and economic sanctions imposed in connection with the nuclear stand-off will be gradually eased, as soon as Iran realises its obligations. UN sanctions imposed over the years will also be completely lifted – although existing trade restrictions on nuclear and missile technology and on conventional weapons – will remain in place in the form of a new UN resolution.

The curtailment of uranium enrichment and the heavy water reactor in particular go far beyond what appeared possible at the start of negotiations in the autumn of 2013. At 15 years, the reduction period is also longer than had been expected even a short time ago. The US says that this increases the time required to produce the uranium needed for a nuclear bomb to a year – although experts have long been pointing to the fact that in addition to the generation of the necessary uranium, a functioning warhead would then also have to be developed and tested.

The agreement is therefore an important step in denying Iran the potential to develop nuclear weapons in the short term. For this reason, the reactions of those around the negotiating table were positive – first and foremost that of Iranian Foreign Minister Mohammed Jawad Zarif and his US counterpart John Kerry, both of whom had worked tirelessly to reach an agreement in the final days. In a sober but emphatic statement, US President Barack Obama paid tribute to the accord as a step that would "make our country, our allies and the world safer".

When news of the agreement first broke, there were reports of jubilant scenes on the streets of Tehran. The Iranians have suffered for years under the oil embargo and financial and trade sanctions, which have caused state revenues to dry up, driven inflation through the roof, devalued the currency and resulted in supply shortages. The majority of the population hopes that as the sanctions are gradually lifted, living conditions will gradually improve. 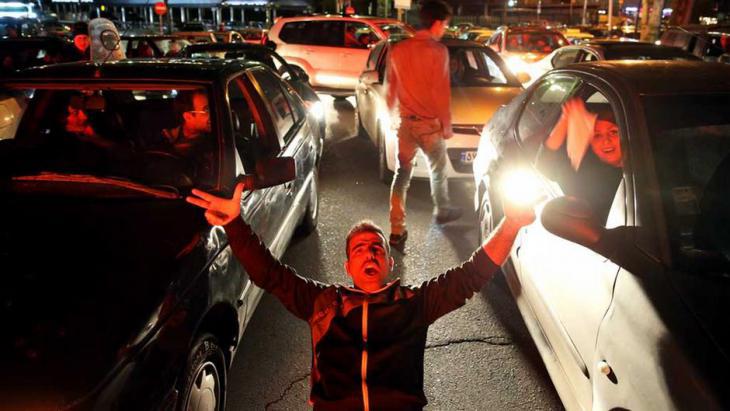 Celebrations on the streets of Tehran following news of the Lausanne agreement: tens of thousands of people in the city sounded car horns and chanted the slogan "Rohani, Zarif, we thank you". Car stereos played the song "Happy" by US artist Pharrell Williams. Many young men and women danced on the streets to the song in defiance of strict regulations prohibiting such public displays of abandon

The agreement was viewed quite differently in Israel. The Minister of Intelligence Yuval Steinitz said the deal was "disconnected from the sad reality of the region". For his part, Prime Minister Benjamin Netanyahu announced – even before details of the agreement were made public in Lausanne – that he would continue to fight it in the coming months. He demanded that any agreement must "roll back Iran's vast nuclear infrastructure and require it to stop its terrorism and aggression" – although it should be noted that the latter was never on the table during these negotiations.

Netanyahu has for a long time resembled the Roman senator Cato the Elder and his legendary pronouncement: "Furthermore, I consider that Carthage must be destroyed", whenever he warns for the umpteenth time that Iran is on the brink of producing the bomb. In early March, he even snubbed his most important ally when, in a startling break with diplomatic protocol without any prior consultation with the White House, he gave an inflammatory speech at the US Congress warning that Obama was allowing himself to be tricked by Iran.

Republicans in the US are not far behind Netanyahu in their rejection of the negotiations. In early March, a group of senators even took the unprecedented step of publishing an open letter in which they warned the Iranian leadership that a deal would require approval by Congress and that a future president could revoke it "with the stroke of a pen". In doing this, they not only questioned the president's foreign policy prerogative but also gave rise to fundamental doubts regarding the reliability of legal commitments made by the US. 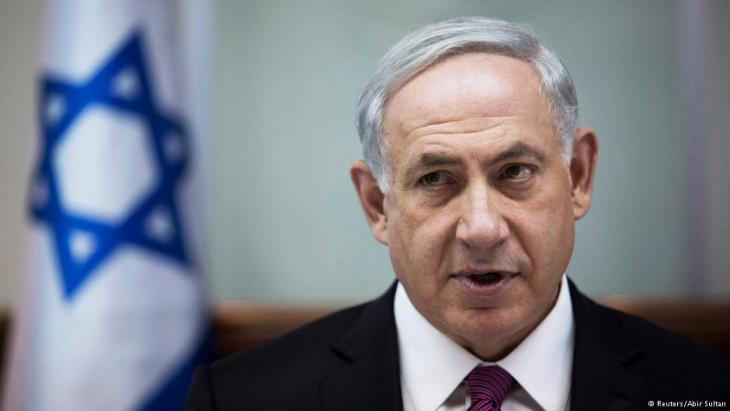 Israel's Prime Minister on the offensive: in the past, the Jewish state has repeatedly stressed it would act alone if necessary to prevent its enemy Iran from building a nuclear bomb. "The military option was always on the table," Nimrod Sheffer, the General responsible for military planning, told the newspaper "Hayom", adding that this has not changed

No agreement without compromise

Following the agreement in Lausanne, Republican Speaker of the House John Boehner again called for the deal to be presented to Congress for approval. Obama had previously spoken out in favour of a congressional examination of the deal but had warned against making it a political object of dispute. If Congress should bring down the deal, he warned, the international community would blame the US. Quoting his predecessor John F. Kennedy, he said: "Let us never negotiate out of fear, but let us also never fear to negotiate."

Judging by the downright hysterical reactions in Israel and from the Republicans, one might have thought that the US was in the process of unconditionally bending to Iranian demands. But neither the course of the negotiations nor the deal struck in Lausanne give credence to this notion. The critics appear to forget that without compromise, negotiations cannot result in agreement. A compromise requires concessions on both sides. Those who refuse to budge from maximum demands have lost all sense of diplomacy and reality.

In addition, the critics have also failed to come up with an alternative scenario. Obama was right when he warned that anyone believing further sanctions would convince Iran to give up its nuclear programme is wrong. Air attacks, as he also rightly said, would put the Iranian nuclear programme back several years – albeit only a few years – but would at the same time plunge the region into yet another war. Diplomacy is clearly the only way forward. And in this instance, diplomacy has achieved a good result for both sides.

The foreign policy direction favoured by Washington's new incumbent is putting a strain on relations with Turkey. The two nations look set to clash over a whole host of issues, ... END_OF_DOCUMENT_TOKEN_TO_BE_REPLACED

How can we truly appreciate the richness of cultures not our own? In her recent book "What is Islamic art? Between religion and perception", art historian Wendy Shaw explains the ... END_OF_DOCUMENT_TOKEN_TO_BE_REPLACED

In his controversial book published in 2020, French author Pascal Bruckner describes anti-Muslim sentiment as a fiction, claiming that the term "Islamophobia" is being used to ... END_OF_DOCUMENT_TOKEN_TO_BE_REPLACED

Several media reports in recent weeks have focused on the potential threat presented by Islamist groups in Germany. The discourse is fraught with generalisations, both sides ... END_OF_DOCUMENT_TOKEN_TO_BE_REPLACED

The child of Iraqi refugees, Saman Haddad arrived in Germany twenty-five years ago at the age of thirteen. Now a well-known cultural figure in Bonn, Haddad doesn't wait for others ... END_OF_DOCUMENT_TOKEN_TO_BE_REPLACED

The Islamic Republic of Iran has been subject to sanctions ever since its creation in 1979. The more the regime has entrenched itself and expanded its power in the region, the ... END_OF_DOCUMENT_TOKEN_TO_BE_REPLACED
Author:
Ulrich von Schwerin
Date:
Mail:
Send via mail

END_OF_DOCUMENT_TOKEN_TO_BE_REPLACED
Social media
and networks
Subscribe to our
newsletter