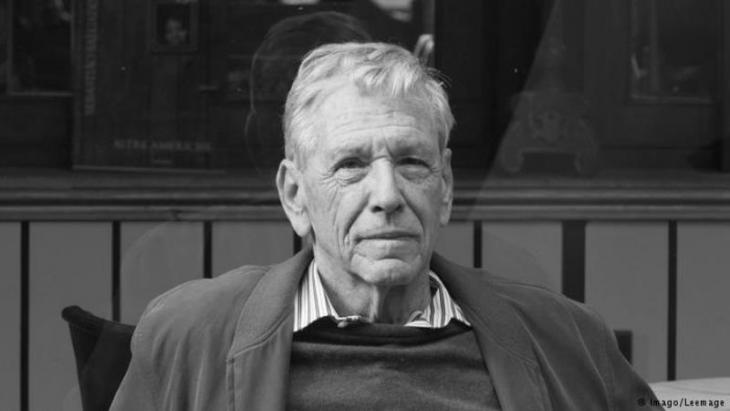 His works centred on life in the kibbutz and the history of Israel and earned him countless awards and honorary doctorates. Amos Oz, writer and peace activist, passed away on 28 December at the age of 79. Angelika Ditscheid looks back on his life

Amos Oz was born Amos Klausner on 4 May 1939 in Jerusalem and grew up in a district dominated by Jewish immigrants of Eastern European descent. His father's family had fled the Russian Revolution of 1917 from Odessa to Vilnius. In 1933 they emigrated to Palestine.

Following the suicide of his mother, Oz joined the Kibbutz Hulda at the age of 15. To the chagrin of his father, he replaced his family name with the name "Oz," which in Hebrew means "force" or "strength."

Surrounded by books and languages

Oz's father, who came from a family of Zionist scholars, was a librarian and literary critic and spoke 12 languages; his mother spoke seven. They taught their son only Hebrew, but in a roundabout way he managed to return to multilingualism: his works have been translated into more than 40 languages, making him Israel's most-translated author.

In 2014, he was awarded an honorary doctorate by Trinity College in Dublin, Ireland. "The great character writer of our time" – as the German daily Frankfurter Allgemeine Zeitung called him – won many awards and distinctions, including the Peace Prize of the German Book Trade, the Goethe Prize, the Heinrich Heine Prize and the Siegfried Lenz Prize. 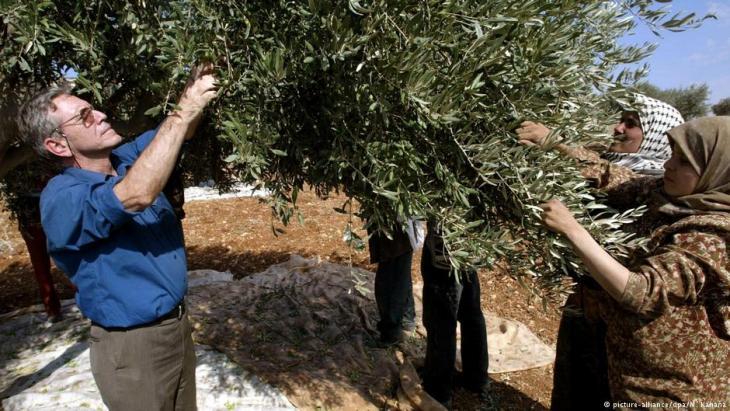 Oz considered the pacifist slogan "make love not war" to be unrealistic and suggested instead in countless interviews that it should read "make peace not love". Following the Six-Day War of 1967, Oz became an advocate of a two-state solution and went on to co-found the organisation Peace Now. He was a vocal peace advocate throughout his life. He is pictured here harvesting olives on the West Bank

The microcosm of kibbutz society, the tensions and uncertainties in the young state of Israel and the conflict between Israelis and Palestinians are central themes in Oz's extensive work, starting with his first collection of short stories, Where the Jackals Howl, in 1965.

The author achieved global fame in 1968 with his second novel, My Michael. It tells the story of a young woman who, after the failure of her marriage, escapes in her dreams to two handsome Arab twin brothers. Although she is not particularly interested in politics, the formation of the young Jewish state is reflected in her personal fate. My Michael broke long-standing taboos about relationships between Jews and Arabs.

Following the Six-Day War of 1967, Oz became an early advocate of a two-state solution to the Israeli-Palestinian conflict and went on to co-found Peace Now, an organisation that seeks to achieve that.

"My suggestion is to accept the terms which the whole world knows for a two-state-solution and coexistence between Israel and the West Bank: two capitals in Jerusalem, a mutually agreed territorial modification, and removal of most of the Jewish settlements from the West Bank," Oz said in a 2014 interview.

He went on to say that he would like to see "Israel removed once and for all from the front pages of all the newspapers in the world and instead conquer, occupy and build settlements in the literary, arts, music and architecture supplements. This is my dream for the future."

Oz's support for a two-state solution was not widely popular in Israel. His nomination for the Israel Prize for Literature in 1998 met with heated controversy.

Literature is more than politics

During a series of lectures held at the University of Tübingen in Germany in 2002, published later in the book How to Cure a Fanatic, Oz tackled what he considered misconceptions about the Israeli peace movement.

This situation in his country could not be paralleled to the German peace movement, he said, and he was "not a pacifist in the sentimental sense of the word." He fought in the Six-Day War in the Sinai Desert and took part in the Yom Kippur War of 1973 in the Golan Heights. He also spoke out in favor of the Second Lebanon War in 2006 and supported Israel's actions during the 2014 Israel–Gaza conflict.

Though he held strong political opinions and was publicly vocal about them, Oz did not want his literary works to be reduced to a political message.

He emphasised that he did not trace the problems in human relationships back to the living conditions in a particular political context, but to a much deeper level of the human soul – saying he aimed to write not only about life in the context of the Middle East conflict, but about life itself.

Her grandparents are Jews – born in Tunisia and Algeria. Director Cleo Cohen has now broken the silence about this with a very personal debut. By Nadine Wojcik END_OF_DOCUMENT_TOKEN_TO_BE_REPLACED

Every year in December, the team at Qantara.de takes a look back at the articles that proved most popular with our readers. This year is no different. Here is a run-down of the ... END_OF_DOCUMENT_TOKEN_TO_BE_REPLACED

Christmas in Bethlehem is usually a festive and colourful season. This year, festivities in the Palestinian town are set to return – but the COVID-19 pandemic is still casting a ... END_OF_DOCUMENT_TOKEN_TO_BE_REPLACED

Haifa is known for being Israel’s exemplary model of relative harmony between Jewish and Palestinian citizens. Its unique "Holiday of Holidays" is a joyous, multicultural event ... END_OF_DOCUMENT_TOKEN_TO_BE_REPLACED

May 2021 saw a deadly flare-up in Israel-Hamas hostilities, with eruptions of extreme violence in several of Israel's 'mixed' cities. Two weeks later, a broad-spectrum governing ... END_OF_DOCUMENT_TOKEN_TO_BE_REPLACED

Ankara is seeking to improve its relations with several states in the Middle East – such as the United Arab Emirates, Egypt and Israel. There are several reasons for this. ... END_OF_DOCUMENT_TOKEN_TO_BE_REPLACED
Author:
Angelika Ditscheid
Date:
Mail:
Send via mail

END_OF_DOCUMENT_TOKEN_TO_BE_REPLACED
Social media
and networks
Subscribe to our
newsletter