On 30 December last year Abdurrahman Wahid died in Jakarta at the age of sixty-nine. The first democratically elected president following the Suharto dictatorship, he had campaigned for interreligious dialogue and a peaceful Islam. An obituary by Armin Wertz

A great loss to moves towards a tolerant, democratic Indonesian society: the republic's seer, guru and "cleric of pluralism" Abdurrahman Wahid

​​ When Abdurrahman Wahid died at the end of December in Jakarta, thousands of people gathered spontaneously to pray together throughout the country. Current president Susilo Bambang Yudhoyono declared seven days of official state mourning.

Known as Gus Dur ("brother Dur") from October 1999 to July 2001 Wahid, a former Muslim leader, was Indonesia's fourth president – the first for decades to be democratically elected.

For Wahid, however, his term of office more closely resembled the low point of his life. He became entangled in corruption scandals and most of his reform ideas were unsuccessful. He was unable to end the fighting between Muslims and Christians on the Maluku Islands and in central Sulawesi, the civil war in Aceh or the conflict in West Papua. 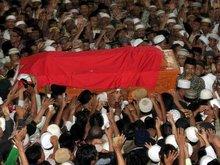 ​​ Although he fired defence minister Wiranto, responsible for the atrocities associated with the independence referendum in East Timor in 1999, and exposed the co-operation between Islamists and generals, he was never able to reduce the influence of the military.

In July 2001 an alliance of Muslims and the military forced him out of office. The Australian historian Adrian Vickers wrote that Indonesia was not ready for Gus Dur's offensive for democracy.

A "cleric of pluralism"

Wahid's significance to the country extended way beyond his time as president however. A diabetes sufferer left blind following three strokes, famous for his courage, his unorthodox behaviour and his black humour, he was Indonesia's seer, guru and its "cleric of pluralism", as the Jakarta Post named him.

He fought for interreligious dialogue and a peaceful Islam. He openly supported Christians and Chinese and even advocated a normal relationship to Jews. He was a blessing for all faiths, Jakarta's archbishop said.

With his liberal, egalitarian ideas of Islam Abdurrahman Wahid offended conservative Muslims in particular: here together with his daughter Yenny Zannuba Wahid, current head of the Wahid Institute in Jakarta

​​ He apologised to the victims of the Suharto dictatorship and the East Timorese for their sufferings under Indonesia's rule. He ended the ban on communism, asked the victims of the anti-communist killings of 1965/66 for forgiveness and attempted to introduce a process of reconciliation which enraged the military, many Muslims, his party and even certain members of his family, who had spearheaded the mass murders.

Wahid's unconventional behaviour was apparent even during his student years at Cairo's Al-Azhar University. Instead of pursuing his studies in Muslim scripture he soaked up new-wave films, French, English and Marxist literature and left Cairo disappointed, finding the lessons there irrelevant. He went to Baghdad, where he made a name for himself with socio-religious writings.

Wahid was born in East Java in 1940 into a highly regarded religious family. His father was minster for religion under the state's founder Sukarno, his grandfather founded Nahdlatul Ulama (NU), the world's largest Muslim organisation, with over 30 million members worldwide. Wahid himself was its leader from 1984 to 1999.

Well before his presidency he called on the Ulamas to work for a social and cultural transformation of society. He was the first member of the elite to develop plans to topple the dictator Suharto and to talk of the need for revolution.

Liberal Islamic Networks in Indonesia
A Counter-Movement to Political Islam
In recent years Indonesia has seen the development of a network of various Muslim NGOs that convey a contemporary understanding of Islam, working to counter the advance of Islamization.