Doris Kilias was the translator of Nobel laureate Naguib Mahfouz. With her pitch-perfect translations, she introduced his novels to a broad German audience – contributing toward his worldwide recognition. Doris Kilias died on June 1. An appreciation by Loay Mudhoon

Doris Kilias (1942-2008). In 1999 she was awarded the Jane Scatcherd Prize "for precise translations that provide insights into another culture"

​​"We do not actually know what a translation is," claimed Friedrich Schlegel, the German cultural philosopher and a major figure of Early Romanticism. But his words do not apply to the German Arabic scholar and translator Doris Kilias – she knew exactly what mattered in a translation.

But as she herself emphasized, for the gifted translator of numerous novels by the Egyptian Nobel Prize laureate Naguib Mahfouz, translation work was one thing in particular: hard work. Especially given that literary translations from the Arabic require cultural as well as linguistic expertise.

A unique opportunity in a crisis

It was 1967 when Doris Kilias traveled to an Arab country for the first time: as a post-graduate student she seized the unique opportunity to spend two semesters at Cairo University, even though the East German authorities let her leave the country only under the condition that she leave behind her five-month-old daughter Jenny in East Berlin as a kind of "security". Still, Doris Kilias knew that it was the chance of a lifetime. "I was one of the few fortunate ones who were allowed to do that," she later admitted. 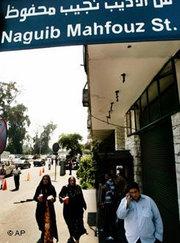 Doris Kilias first visited the Arab world after the Six Days' War. The defeat cast the Arab elites into turmoil; for the first time, critical voices entered the public discourse

​​Her first experiences on the Nile left a lasting impression: "I arrived in Cairo in 1967, just after the Six Days' War. The mood there was devastating. From Berlin, of course, it was impossible to imagine what an awful atmosphere prevailed at the time," Doris Kilias recalled.

However, the shock which the Six Day War dealt to the consciousness of Arab elites and cultural circles had something of a salutary effect on literature. For the first time, Arab authors examined the essential and existential issues of their societies: amidst the crisis, they suddenly began to reflect about themselves. Who are we and what are we?

With the blow of the defeat, Arab thought took on new, unprecedented self-critical aspects. For the young, budding Arabic scholar, this time was "an interesting development and a productive stimulus for literature."

Awe of the old master

Naguib Mahfouz: winner of the 1988 Nobel Prize for Literature

​​Though Doris Kilias has translated literature by other authors such as Mohamed Choukri, Gamal Al-Ghitani and, more recently, Miral al-Tahawi into German, Mahfouz, the grand master of Arabic prose, exercised the greatest fascination over her:

"It was wonderful to listen to him and watch how patiently he discussed young writers' work with them, gently offering suggestions", she said of her first encounter with Mahfouz in the venerable Café Risch in Cairo. Later she admitted frankly: "I love life at Naguib Mahfouz' side".

Like all translators, Doris Kilias was overshadowed by her authors, and the inadequate, often non-existent recognition of the translator's work infuriated her: "They seem to think he writes in German!" was her indignant reaction when critics praised the language of the authors she translated without paying tribute to her achievement or even mentioning her name.

​​"When asked what the best thing about translating is, she says: being someone else for a while," wrote Doris Kilias' daughter Jenny, who published a wonderful tribute to her mother in the "Berliner Zeitung".

Despite her dedication to her profession, Doris Kilias was devoted to her family as well. Hassan Dawud – writer and features editor of the Lebanese newspaper "Al-Mustaqbal", a friend and colleague of Kilias – spoke in his obituary in "Al-Mustaqbal" of the wrenching phase in the translator's life when she took care of her cancer-stricken husband and lacked the energy to complete several translation projects with the prized precision for which she was always known.

"You must love your subject in order to truly convey something." Throughout her entire professional career, Doris Kilias embodied these words of the poet Goethe. And above all else Doris Kilias loved Naguib Mahfouz ' literary worlds and themes; perhaps that is why she managed to convey his literature so successfully, thus contributing toward his worldwide recognition.

Ultimately it is gifted, persistent translators who make foreign literature into world literature. In the hectic business of translating between east and west, Doris Kilias leaves a gap that will not be easy to fill.

END_OF_DOCUMENT_TOKEN_TO_BE_REPLACED
Social media
and networks
Subscribe to our
newsletter