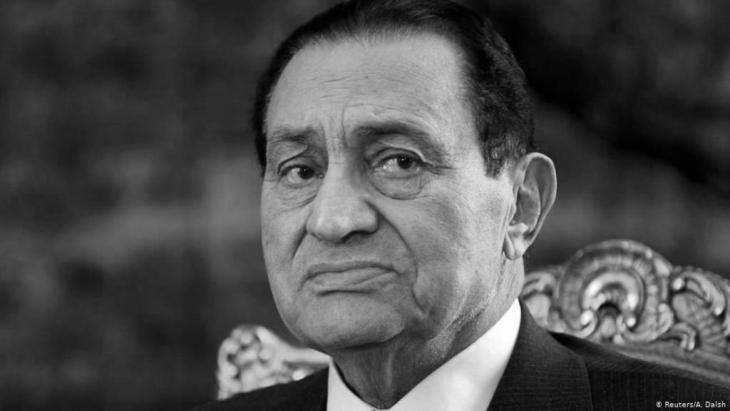 Egypt's former long-term president is dead. His ailing political and economic legacy is now in the hands of the country's present-day authoritarian rulers. An obituary from Cairo by Karim El-Gawhary

It was like a blast from the past. The announcement that 91-year-old former Egyptian President Hosni Mubarak died on Tuesday morning provoked few reactions in the country on the Nile. For like all the other autocrats who were overthrown during the Arabellion of 2011, whether Tunisiaʹs Ben Ali or Libya's Gaddafi, Mubarak had played no role in the political life of his country since his abdication nine years ago.

Of course, obligatory Mubarak obituaries were shown on Egyptian state television. But his end, the uprising against him on Tahrir Square, which began on 25 January 2011, was deliberately omitted – as if Mubarak's power had come to a magical end. A testimony to how much the new rulers of the country – President Abdul Fattah al-Sisi and the military – want to erase the Arab Spring from the history books.

Mubarak came to power in 1981 when his predecessor Anwar al-Sadat was shot dead by militant Islamists at a military parade on 6 October.  Only a few believed that the then rather inconspicuous and not very charismatic air force commander would hold on to power. It just shows how wrong one can be.

When Mubarak took up his presidency in Egypt, Bruno Kreisky was still in the Federal Chancellery in Austria and Helmut Schmidt in Germany. While Schmidt – retired, cigarette-smoking and statesmanlike – was appearing on German talk shows, Mubarak was still ruling with an iron grip, despite six failed attacks on his presidency. He finally abdicated on 11.2.2011, following a popular uprising against him lasting 18 days.

What followed was a series of trials against him. The first images of him, hidden behind his sunglasses on a medical stretcher tilted upright in the defendant's cage in court, were broadcast around the world. Initially, he was sentenced to life imprisonment for the death of 800 demonstrators during the uprising against him.

Archaeologists have uncovered the remains of an ancient city in the desert outside Luxor in Egypt. They say it dates back to the golden age of the Pharaohs more than 3,000 years ... END_OF_DOCUMENT_TOKEN_TO_BE_REPLACED

The Prophet Muhammad never executed anyone for apostasy, nor encouraged his followers to do so. Nor is criminalising sacrilege based on Islam’s main sacred text, the Koran. In ... END_OF_DOCUMENT_TOKEN_TO_BE_REPLACED

Surging coronavirus cases in many parts of the world have overshadowed the start of this year's Muslim holy month of Ramadan, with festivities once again curtailed by contagion ... END_OF_DOCUMENT_TOKEN_TO_BE_REPLACED

German Middle East analyst Guido Steinberg and television journalist Ulrich Tilgner have both published new books on the conflicts in the Middle East. Their analyses and their ... END_OF_DOCUMENT_TOKEN_TO_BE_REPLACED

Televised Turkish dramas are all the rage in the Middle East. A young Ottoman TV Empire has been expanding its soft power by harnessing regional dialects, Arabic names and viewers ... END_OF_DOCUMENT_TOKEN_TO_BE_REPLACED

Nawal El-Saadawi has died in Cairo at the age of 89. The prominent doctor, activist and author became internationally known for her outcry against female genital mutilation and ... END_OF_DOCUMENT_TOKEN_TO_BE_REPLACED
Author:
Karim El-Gawhary
Date:
Mail:
Send via mail

END_OF_DOCUMENT_TOKEN_TO_BE_REPLACED
Social media
and networks
Subscribe to our
newsletter