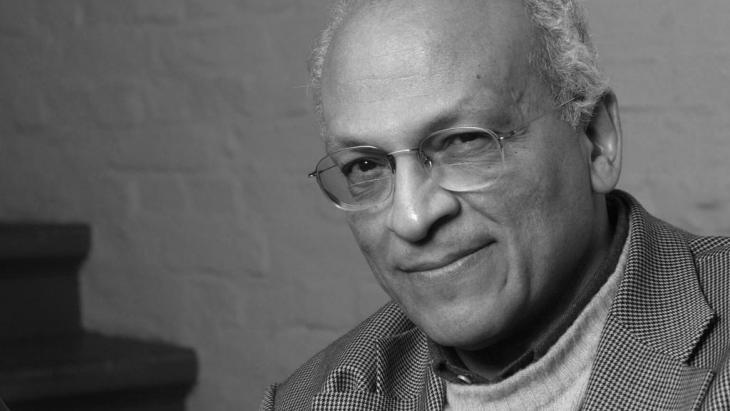 The literary output of writer Gamal al-Ghitani, who was also a journalist and publisher of the literary magazine "Akhbar al-Adab", was influenced by his friendship with Egyptian Nobel literature laureate Naguib Mahfouz. The great literary facilitator died in Cairo on 18 October, at the age of 70. An obituary by Suleman Taufiq

Gamal al-Ghitani was born into a poor family in Upper Egypt, on 9 May 1945, and grew up in Cairo′s old town. He was fascinated by the world of literature from an early age. "I came into this world a writer. Nobody taught me that," he once said.

He started inventing stories as a child, telling them to his mother as she did the housework. He had his first short story published at the age of 14.

Al-Ghitani trained as a designer of oriental carpets at the college of art and crafts, and worked in this profession until 1968. At that point, he changed careers and became a journalist. He first worked on the news desk of "Akhbar al-Yawm", a leading Egyptian daily newspaper, and for a time as a military correspondent in the Suez zone. In 1993 he finally founded the influential literary weekly magazine "Akhbar al-Adab", and became its editor-in-chief.

His career as a writer began in 1969, with the publication of his short-story collection "Pages of a young man who lived a thousand years". The book drew some attention, though it didn′t make him a well-known author.

But by the end of his life, Ghitani had become one of the most productive and successful authors of his generation. He wrote numerous books, stories and novels as well as travel books and historical novels, books about the architecture of old Cairo, and a few biographies.

Friendship with a father figure

He developed a close relationship to the Egyptian Nobel literature laureate Naguib Mahfouz early on, and was one of only a very few people permitted to see him often.

Gamal al-Ghitani first met Mahfouz in the cafe where Mahfouz had regular meetings with a circle of authors. Many Egyptian writers began their apprenticeships with him there. And Gamal al-Ghitani, too, enjoyed the attention of the master at the start of his career as a writer. 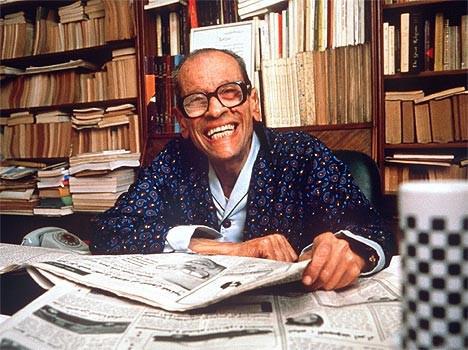 Literary inspiration Naguib Mahfouz: Al-Ghitani developed a close relationship to the Egyptian Nobel literature laureate Naguib Mahfouz early on, and was one of only a very few people permitted to see him often. He enjoyed the attention of the master at the start of his career as a writer

Mahfouz′s influence can be clearly seen in Ghitani′s writing. Both authors were inspired by Cairo. Old Cairo in particular spurred Ghitani on to write and provided him with numerous stories. His works describe a diverse variety of encounters with people and their lives, and his fascination for the history of the city and its inhabitants.

Ghitani was part of a generation of writers who came together after Egypt′s military defeat in the Six-Day War in 1967. They were looking for a new literary form and a new language to suit it. Dissatisfied with a literature dominated by tradition, they developed their own creative style. With increasing frequency, they took up subjects from world literature, and clearly highlighted the conflict of the individual with the existential questions of living in society.

A rediscovery of tradition

Gamal al-Ghitani′s style may still cling to tradition, but it largely frees itself from the Western examples that other authors tried to copy. His texts are often oriented by Arabic models from the Middle Ages. In this way he tried to re-establish a particular Egyptian Arabic storytelling tradition in his country′s modern literature.

His novels are unstinting in their political undertones. Ghitani was concerned above all with the concrete portrayal of the different mechanisms by which power was concentrated for control and suppression, leading to the establishment and strengthening of totalitarian, dictatorial regimes. His works reflect the constant search for the role of the human in present-day Egyptian society.

Ghitani′s fascination with Arabic literature of the Middle Ages, in particular the work of the Egyptian historian Ibn Iyas, is reflected in his great historical novel "Zayni Barakat". The book, which is also available in German and English, is his most famous work. The novel is an allegory of Nasser′s time in government, and focuses on the machinations of the secret services – though it is set in the 16th century. 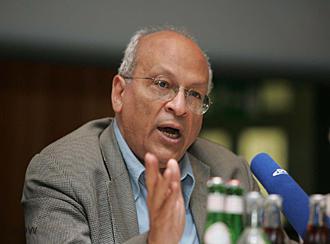 Under fire alongside Egypt′s intellectuals: politically, Ghitani supported the military′s 2013 overthrow of President Mohammed Morsi, who had come to office as the Muslim Brotherhood′s candidate

In the novel, the Ottomans are replacing the Mamluks as the rulers of Egypt. The main protagonists are two secret service chiefs in competition with each other, and two students at the Islamic university of Al-Azhar. The author addresses corruption, intrigues and abuses of power through a novel set in the Middle Ages, though it is of course a cutting critique of Egyptian society – a critique which can be transferred effortlessly to the whole of the Arab world.

In his novels, numerous individual sequences and stories come together to form a great panorama of life in Egypt. Al-Ghitani surprises the reader with allegories and multiple meanings. You can sense his black humour and the bitter irony that drives his description of society. In a society like Egypt′s, where there is no democracy and where freedom is hidden, maimed and suppressed, literature takes on the task of revealing the truth. Al-Ghitani experienced this suppression at first hand: in 1966-67, during the Nasser era, he spent several months in jail for political reasons.

Very early on, al-Ghitani began warning readers about the politico-religious powers gaining strength in his country. In his novel "The Zafarani Files", he writes about the people of the fictional Zafarani Alley. Everyday life and its dramas, which played out before his eyes in his neighbourhood, are vividly portrayed here. The novel also offers a caustic parody of Islamic fundamentalism, which was already making headlines in the 1970s. The book can therefore also be read as a snapshot of present-day Egyptian society.

Gamal al-Ghitani had recently taken a clear position on the rule of the Muslim Brotherhood in Egypt. He accused the Islamists of wanting to set up a religious state. It meant that he welcomed the army′s intervention. For him – as for many secular intellectuals in Egypt – the military represented the lesser evil when compared to Morsi′s rule. Ghitani supported General Al-Sisi, and even saw him as a "saviour of Egypt". This attitude drew a lot of criticism from democracy activists, particularly on social media.

END_OF_DOCUMENT_TOKEN_TO_BE_REPLACED
Social media
and networks
Subscribe to our
newsletter