Classical Persian music is not really designed for large concert halls. It isn’t orchestral; its fundamental tone is quiet, sometimes no more than a whisper. Anyone who sets foot in the music room of Isfahan’s 17th-century royal palace will guess as much. The main instruments – the sitar and tar, kamancheh, santur, daf and ney – usually murmur more than they boast. Then they burst into brief flares of sound.

Shajarian entered into an unmistakeable communication with them all. “Accompaniment” would be the wrong word; Shajarian spoke to them. He loved them, you could sense that in every bar – though in fact the whispering tones of the instruments and the piercing force of his singing voice were opposites. They produced a taut equilibrium, a harmonic magic that is impossible to forget.

A piece called “Bidad” is one of the most beautiful dialogues that music has ever created. Shajarian performs it with the santur virtuoso Parviz Meshkatian (1955-2009). This musical dialogue between singer and instrument opens up the wider context of this art to the listener. As you begin to explore it, you quickly realise that the honorific “Master” is misleading.

At the service of tradition

Shajarian regarded himself as a servant. He served tradition by working within it. In their dialogue, Shajarian and Meshkatian set to music a poem by Hafez (c. 1315-1389) about the longing for lost friendship and vanished peace. The poem consists of a series of ever more probing questions. What has become of the spring cloud, the nightingales, the men who sup wine? Where have they all gone? 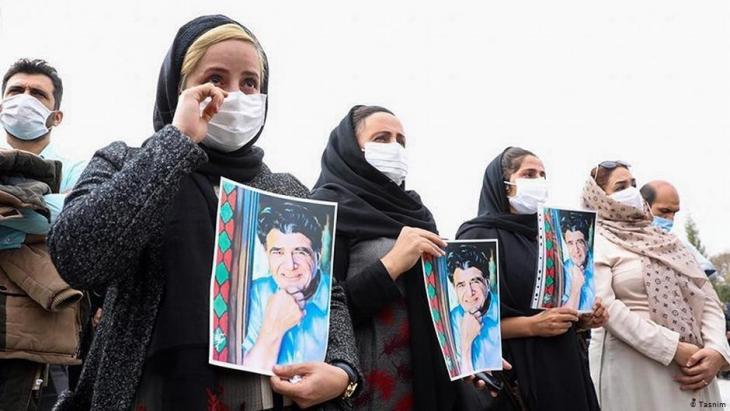 Mourning the grand master of classical Persian music: Mohammad Reza Shajarian died last Thursday in Tehran, at the age of 80, following a long illness. He offered a resonance chamber for cultural memory. He was a legend long before his death

The recording was made in the 1980s, during the war with Iraq in which so many lives were lost. The Iranian population took comfort in it, and it was widely listened to. Shajarian demonstrates an important basic principle of Persian music here. It serves the text. The music brings the poetry to life by giving it the most beautiful form imaginable.

Mohammad Reza Shajarian was buried on Saturday in the grounds of the Ferdosi Mausoleum (940-1020) in Tus. The choice of this burial site in the province of Khorasan illustrates the historical dimension. Ferdosi is the poet of the "Book of Kings" (Shahnameh), without whom the Persian language would not have survived.

In this steppe with its wide horizon, the caller may easily get the idea that nobody hears him except God. And it was here that Shajarian was born. As a little boy, he came to music through the melodic recitation of the Koran. And as a mature singer, he found his way to the poets – first and foremost Hafez, the leading historical figure of Persian art.

In dialogue with Hafez

At the end of every poem, Hafez addresses himself in two final lines that have an ironic undertone. As if he were taking a step back from his work, commenting on his own words and his poetic endeavours from a certain distance. When Shajarian reaches these lines, what makes his work so significant becomes explicit.

Hafez is no longer speaking to himself: Shajarian is calling to Hafez, as an equal. There is no higher step that a Persian artist can reach. The poem ends with the line: “Hafez, be silent now, no one knows the divine secrets.”

The country's mood was already weighed down by economic and social problems and military crises before the pandemic reached Iran. The regime's crisis management has done little to ... END_OF_DOCUMENT_TOKEN_TO_BE_REPLACED

The Iran-Iraq War was one of the deadliest military conflicts ever seen in the Middle East. The eight-year-long conflict, which saw the use of chemical weapons, killed thousands ... END_OF_DOCUMENT_TOKEN_TO_BE_REPLACED

A new book offers a deep insight into Iran's state media apparatus. It gives a first-hand account of the debates around the how the system positions itself – and shows how a new ... END_OF_DOCUMENT_TOKEN_TO_BE_REPLACED

The execution of wrestler Navid Afkari triggered an international outcry, as well as protests against the Iranian justice system. At the same time, it has highlighted the ... END_OF_DOCUMENT_TOKEN_TO_BE_REPLACED

Iranian director Manijeh Hekmat expected the production of her latest movie to go ahead as planned – but then she found herself having to improvise. The resulting film is more ... END_OF_DOCUMENT_TOKEN_TO_BE_REPLACED

Iran's capital city, Tehran, is firmly in the grip of the coronavirus pandemic. The cultural scene is suffering because of it too. But in the face of adversity and the often ... END_OF_DOCUMENT_TOKEN_TO_BE_REPLACED
Author:
Stefan Buchen
Date:
Mail:
Send via mail

END_OF_DOCUMENT_TOKEN_TO_BE_REPLACED
Social media
and networks
Subscribe to our
newsletter