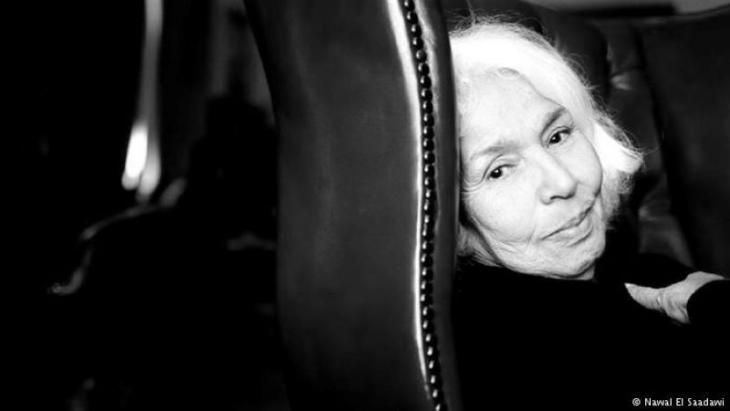 Nawal El-Saadawi has died in Cairo at the age of 89. The prominent doctor, activist and author became internationally known for her outcry against female genital mutilation and honour killings. In recent years, however, her defence of the Sisi regime also drew criticism. By Karim El-Gawhary

She was the "Umm El-Women's Rights", the mother of women's rights in Egypt. This week, Nawal El-Saadawi died in Cairo at the age of 89. With her decades of commitment to women's issues, the outspoken activist made a name for herself not only in her home country on the Nile but across the globe. It was above all her outcry against female genital mutilation and honour killings that brought the physician worldwide fame.

In her book "The Hidden Face of Eve", El Saadawi, who was born in a village near Cairo in 1931, described her own experience of genital mutilation on a bathroom floor at the age of six while her mother looked on.

With over works of 50 non-fiction and novels to her name, addressing sexuality, religion and the inequalities enshrined in Islamic inheritance law, El Saadawi frequently sparked controversy in Egypt. Her book "Women and Sex" led to the loss of her job as Egypt's Director of Public Health in 1971. Ten years later, the then-President Anwar El-Sadat had her imprisoned, along with many other primarily left-wing activists. Three months later, after Sadat's assassination, she was released again. She wrote her "Memoirs in a Women's Prison" in part with an eyebrow pencil on a roll of toilet paper.

In the 1990s, El Saadawi went into exile in the USA for three years due to the massive hostility she faced in Egypt, especially from the conservative and Islamist camps. She was repeatedly accused of being an apostate from Islam and received death threats. The outspoken El Saadawi, whose works have been translated into 40 languages, received multiple international honours for her work. Last year, the U.S. edition of TIME magazine named her one of the world's most influential people. 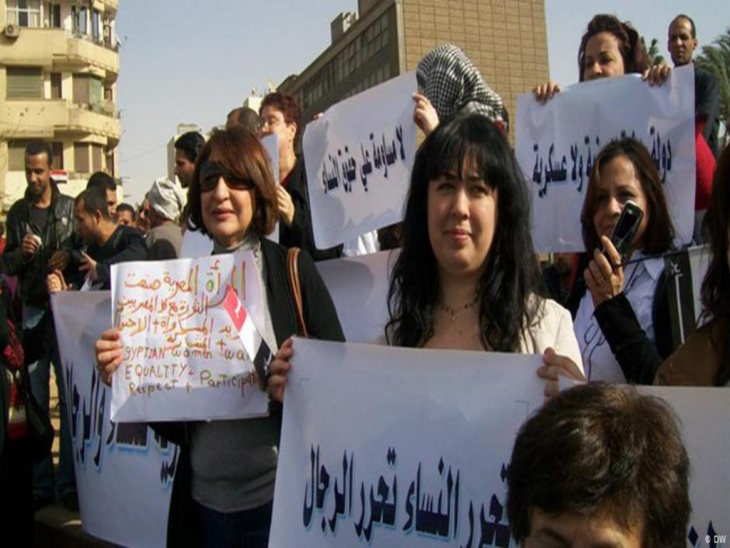 Women demonstrating in Cairo in 2012: El Saadawi was an inspiration for generations of women, although since the mid-1990s she had played only a marginal role in the Egyptian women's movement, writes Karim El-Gawhary. Younger activists have taken the lead in campaigns addressing such issues as the rise in public sexual harassment in Egypt and advocating for the reform of family law. And when, after the military take-over, El Saadawi began to defend the regime of the former military chief and current president Abdul Fatah al-Sisi and his human rights violations, many of her former comrades-in-arms felt compelled to break with her

In Egypt itself, El Saadawi was above all an inspiration for generations of women, although since the mid-1990s she had played only a marginal role in the Egyptian women's movement. The movement became diversified at the latest with the uprising against the dictator Hosni Mubarak.

Younger activists have taken the lead in campaigns addressing such issues as the rise in public sexual harassment in Egypt and advocating for the reform of family law. El Saadawi, who was one of the protesters in Tahrir Square, focused mostly on doing interviews with international media. Many of the activists from back then still stood by her when she accused the Muslim Brotherhood after its election to parliament and the presidency of having appropriated the revolution for itself.

But when, after the military take-over, El Saadawi began to defend the regime of the former military chief and current president Abdul Fatah al-Sisi and his human rights violations, many of her former comrades-in-arms felt compelled to break with her. El Saadawi accused the Western media of running a smear campaign against Sisi.

One of the Tahrir activists from those days, author Shady Lewis Botros, posted an El Saadawi obituary on his Facebook page in which he tries to reconcile the criticism and praise of El Saadawi in Egypt. There are many reasons to criticise her, he says, especially in view of her shameful position in recent years and her defence of the Sisi regime. 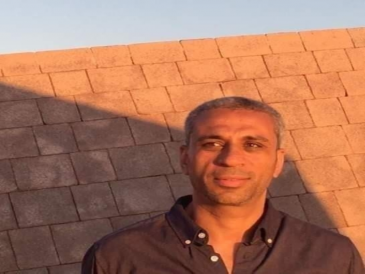 Much praise, but also criticism for Nawal El-Saadawi: Former Tahrir activist and now London-based author Shady Lewis Botros writes that there are many reasons to criticise her, especially in view of her defence of the Sisi regime. And yet, her writings have given so many women, not only in Egypt but throughout the Arab world, a new sense of self-worth and have shaped many of their life choices, he says. "For many generations, El Saadawi was the personified image of feminism, women's rights, and the idea of rebellion as a means of boldly challenging social injustice"

And yet, it is equally necessary to acknowledge the influence of her writings, which have given so many women, not only in Egypt but throughout the Arab world, a new sense of self-worth and have shaped many of their life choices. "For many generations," writes Botros, "El Saadawi was the personified image of feminism, women's rights, and the idea of rebellion as a way of boldly challenging social injustice."

Even on the day of her death, Sunday, 21 March 2021, it was evident just how much work still lies ahead for her successors. A law was passed that very day with stricter penalties for female genital mutilation, which was officially banned in 2008 but still remains widespread.

At the same time, President Sisi described upcoming amendments to Egyptian family law as "balanced" and in the "service of the public", although acknowledging that social debate was still needed before the law could be passed. The bills that been made public so far have led to an outcry, especially among women's rights activists.

According to the draft law, a marriage contract must be signed not by the woman herself but on her behalf by a male relative, who also has the right to dissolve the marriage. Male relatives can forbid a woman from travelling. A mother cannot register the birth of her child, apply for an identity card or passport for her child, or determine the type of schooling the child will receive.

Women's associations such as the Egyptian Centre for Women's Rights (ECWR) are mobilising against this bill. "We have female ministers in Egypt who would not have the right to sign their own marriage contract. Moreover, a man could forbid them to go on a business trip by themselves," commented Nehad Aboul Komsan, ECWR director, on the bill. At a time when single women head more than 18 percent of Egypt's households, this is completely out of touch with reality, she says.

In an interview with Qantara.de, El Saadawi once referred to the fact that there were goddesses in ancient Egypt: "Isis was the goddess of wisdom and not of reproduction! And there was Maat, the goddess of Justice. What then happened historically was that women were deprived of their previous standing," she explained. Nawal El Saadawi is dead, but her fight for women's rights in Egypt goes on – 7,000 years after the first Egyptian goddess.

Algeria‘s regime is again cracking down on anti-fracking activists and the unemployed in the country‘s south. Yet EU countries remain keen to scale up their energy cooperation ... END_OF_DOCUMENT_TOKEN_TO_BE_REPLACED

The murder of a female student at Mansoura University in the Nile Delta has sparked a long overdue debate on femicide in Egypt. Karim El-Gawhary reports from Cairo END_OF_DOCUMENT_TOKEN_TO_BE_REPLACED

Syria, Egypt, Saudi Arabia and the UAE are among those countries increasingly misusing cybercrime legislation to silence dissent and curb freedom of speech. Could a new global ... END_OF_DOCUMENT_TOKEN_TO_BE_REPLACED

Egypt hopes to jump-start the action needed to face a warming world when it takes the presidency of major UN climate talks in November, but warns that countries need a "reality ... END_OF_DOCUMENT_TOKEN_TO_BE_REPLACED

A ceasefire has been in effect in Libya for the past year and a half. Yet after Russia's attack on Ukraine, another proxy war looms in Africa's most oil-rich country. Mirco ... END_OF_DOCUMENT_TOKEN_TO_BE_REPLACED

It is the biggest order in the history of the Siemens Group: a 2,000-kilometre railway network for high-speed trains is to be built in Egypt. But the project raises numerous ... END_OF_DOCUMENT_TOKEN_TO_BE_REPLACED
Author:
Karim El-Gawhary
Date:
Mail:
Send via mail

END_OF_DOCUMENT_TOKEN_TO_BE_REPLACED
Social media
and networks
Subscribe to our
newsletter