Obituary: Tayeb Salih
Season of Literary Migration to the South

With the passing of cult Sudanese author Tayeb Salih on Wednesday 18 February, Arabic literature has lost its most significant writer since Naguib Mahfouz. Stefan Weidner pays tribute to an outstanding author 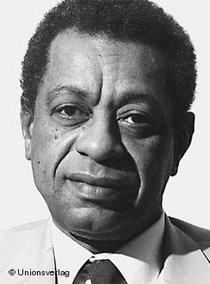 Neither a political propagandist nor someone who chose to paint things black or white: Tayeb Salih, who died this week in London at the age of 80

​​ Before Tayeb Salih stepped onto the seething literary stage that was Beirut in the 1960s, Sudan was literary terra incognita, a white spot in the atlas of poetry.

Salih, who recently passed away at the age of 80, was a past master in the art of proving that there is nowhere too small, too remote, or too insignificant for literature; not even the small village on a bend in the river Nile in northern Sudan where Salih was born in 1929, where the steamboat stops once a week, and where the water pump rattles day in day out.

In his short stories and novels, this village goes by the name of Wadd Hamid. It is not an exaggeration to say that every reader of Arabic literature is familiar with it.

Despite the fact that his literary oeuvre comprised no more than four books, all of which have been published in German by Lenos Verlag, Salih is considered one of the greatest authors ever to come out of both sub-Saharan Africa and the Arab world.

His novel The Season of Migration to the North, which was published in 1966, is one of the all time top ten greats in modern Arabic literature. For an entire generation of Middle East intellectuals, it is a cult book, the shot that signalled the start of the Arab "generation of 1968".

​​ Looking back, even though the term had not yet been coined, the phrase "clash of civilisations" would seem to be the most suitable label for the book, which tells the story of a highly intelligent Sudanese intellectual, Mustafa Sa'eed, who studies in England in the 1920s and pursues a successful career and becomes an "erotomaniac" purely to humiliate the former colonists.

Seen from today's standpoint, Mustafa Sa'eed does indeed seem to be a literary ancestor of Mohammad Atta. But Tayeb Salih was never a political propagandist or someone who chose to paint things black or white.

This is why he gave Sa'eed a companion, the narrator, who studies in England a generation later. When he later returns to his native village, he finds that nothing has changed except for the fact that a stranger, who piques his curiosity, has settled down there. This stranger is Mustafa Sa'eed.

This is where the novel begins. When it ends, Mustafa Sa'eed has committed suicide by drowning himself in the Nile, and the narrator, who has found out what he wanted to know and has also placed his life in the hands of the river, chooses at the very last moment to go on living.

The village as a protagonist

The third protagonist in the book  indeed in almost all Tayeb Salih's stories  is, however, the village itself. In The Wedding of Zein, Salih's first long narrative, Wadd Hamid is still a rural paradise; in The Season of Migration to the North, however, things are coming apart at the seams.

It is no longer an island in the river of time; it is now being swept along by the current, and any of its inhabitants sensitive enough to grasp that this is the case, are carried along with it.

The narrator has an answer to the nihilism of the uprooted Sa'eed: "I will live," he says, "because there are a few people with whom I would like to live for as long as possible, and because there are obligations that I have to meet. I am not interested in whether life has meaning or not." 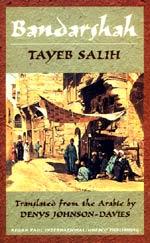 ​​ Salih's oeuvre not only highlights the relationship between East and West, but also enters into a subtle dialogue with the literature of the former British colonial power. Mustafa Sa'eed, who repeatedly draws parallels between himself and Othello, travels to post-Victorian England's heart of darkness and, most particularly, into his own inner heart of darkness.

Just like in the eponymous novel by Joseph Conrad, he is described by a narrator who wants to discover his predecessor's secret and get to the root of his fascination with the heart of darkness. The Season of Migration to the North is the best example of post-colonial literature avant la letter!

It is interesting to note that above all else, Salih did not want to become a writer. He once admitted in an interview that homesickness had driven him to start writing in London.

He had moved to England in 1952 as a reader for the BBC's Arabic Service. Salih, who lived in the British capital until the very end of his life, always considered himself to be a devout Muslim and was a severe critic of the Sudanese regime, unequivocally condemning the expulsions and murders committed in Darfur.

Sudan regularly responded by denying him entry into the country. A friendly, modest, and reserved man, he adored understatement. He always emphasised that every single one of the great poems in classical Arabic literature was worth more than his novels.

The fringes of the Empire strike back

One thing, however, is certain: despite the fact that Salih published his last major work in 1971, literary history will look more kindly on his works than he himself did.

The novel Bandarshah is a dark, difficult, almost mystical book. With the publication of this book, Salih had completed his entire oeuvre  which gives practical evidence of how the fringes of the former British Empire could strike back using literary weapons  in the space of only ten years.

Young Arab writers in particular are referring to him again, from the Egyptian bestseller author Alaa Al Aswany (The Yacoubian Building) to Sulaiman Addonia, a Saudi author who writes in English. In The Consequences of Love, Addonia's two heroes read The Season of Migration to the North together, just as Werther and Lotto read Klopstock's works together in Goethe's The Sorrows of Young Werther.

We have Tayeb Salih to thank for the fact that the caravan routes of East-West and North-South literary exchange are now busy highways. One could say it is the season of (literary) migration to the South!

Interview with Nuruddin Farah
A Miracle Child, Found and Set Free
Nuruddin Farah has more than once been taken into consideration for the Nobel Prize of Literature. In this interview with Qantara.de, the Somali author talks about his new novel, the civil war and his practical optimism for Somalia

END_OF_DOCUMENT_TOKEN_TO_BE_REPLACED
Social media
and networks
Subscribe to our
newsletter