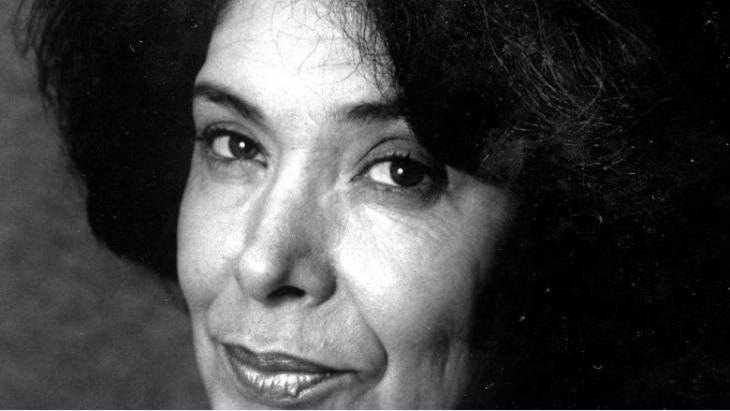 The Algerian author, historian and filmmaker Assia Djebar was the "grande dame" of Francophone Maghreb literature, a figurehead for generations of women writers in the Arab world. Right up until the very end, she was considered a favourite for the Nobel Prize in literature. She died on 6 February at the age of 78. An obituary by Regina Keil-Sagawe

"Cover the body of the marriageable girl. Make her invisible. Turn her into a being that is blinder than a blind man and kill every memory she has of what lies outside. And what if she can write?" ("Fantasia, An Algerian Cavalcade")

Precisely what can happen in such a case was demonstrated in an exemplary fashion by Assia Djebar. She was born Fatima-Zohra Imalayène to a conservative, petty bourgeois Arab-Berber family on 30 June 1936 in the Algerian coastal city of Cherchell, the Roman city of Caesarea.

For a woman in the Arab world, her education and upbringing was probably unique. She describes her first steps along this path at the beginning of her historical novel "L'Amour la Fantasia" (originally published in English in 1985 as "Fantasia, An Algerian Cavalcade"): "A little Arab girl going to school for the first time, one autumn morning, walking hand in hand with her father. A tall erect figure in a fez and a European suit, carrying a bag of schoolbooks. He is a teacher at the French primary school. A little Arab girl in a village in the Algerian Sahel."

Without the open mindedness of her father, a college friend of Mouloud Feraoun, her life would probably have taken a very different course. At the very latest, after attending primary school and Koran school, she would, like her cousins and friends, have disappeared behind a veil. Yet, she was privileged and was permitted to develop her talent. Time and again for over 60 years, she was a trailblazer for her country, her gender and her continent. In 1946, she was only one of five "indigenous" students among hundreds of French students at the secondary school in Blida. In 1955, she became the first female Algerian student to be accepted into the Paris elite university ENS. 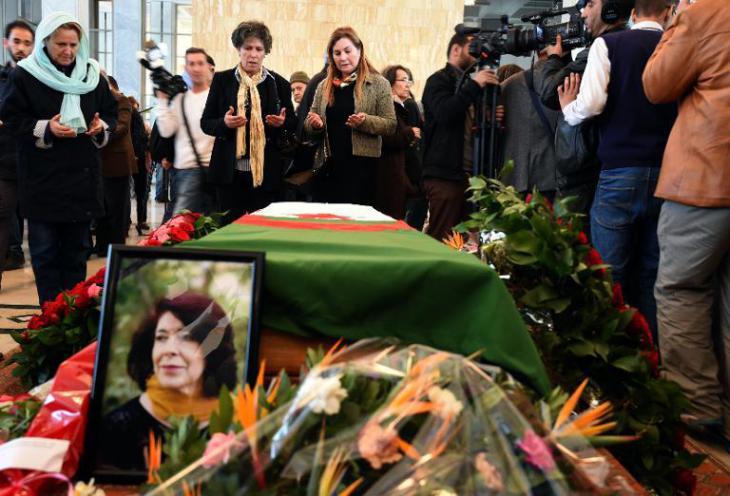 People mourning Assia Djebar, one of the most renowned and influential authors of the Maghreb, in Algeria. Djebar, who was born Fatima-Zohra Imalayène in 1936, died on 6 February at the age of 78 in a Paris hospital. She was buried in the same cemetery as her father in her native town

In Germany, she was the first Algerian woman to be awarded the LiBeratur Prize in 1989, in 2000, she was presented with the prestigious Peace Prize of the German Book Trade, and in 2005, she became the first female Arab author to be elected into the Académie Française in Paris.

She spontaneously reacted to this last honour by commenting that she was delighted for the French-speaking community of the Maghreb. Djebar herself has made a considerable contribution to the French-speaking Maghreb with a body of work that comprises over 20 novels, essays and collections of short stories, plays, screenplays, opera librettos and poems, which have been translated into 23 languages around the world.

Nonetheless, the work of this most important female Maghreb author, who alongside Kateb Yacine, Dib and Mammeri, Feraoun, Memmi and Chraibi is the only woman in the men's club of the 1950s founding generation of writers, has not, with the exception of her childhood recollections "Nulle part dans la maison de mon père" (2007, Arabic in 2014: "Bawabat eddhikrayat") and her play "Rouge l'aube" (1969) been translated into Arabic at all.

Assia Djebar's multi-facetted work, which is dedicated to the causes of women's emancipation, dialogue between cultures and democratic co-existence in multicultural Algeria, has been acknowledged worldwide. However, only one publication, compiled by Amin Zaoui, an Algerian author and former director of the Algerian National Library, has appeared in Arabic.

Assia Djebar regarded writing as self-exploration in the widest possible sense in that it spans both the ego and the collective, penetrates into the buried depths of existence and gets to the very root of everything. In 1999, she even received a doctorate with a retrospective of her own work, which was published as an essay entitled "Ces voix qui m'assiègent – en marge de ma francophonie".

Within the conflict-laden field of tension between two worlds, the painful interplay between the Arab-Islamic tradition and French modernity, her écriture has been characterised by three constant factors: history, being a woman and language.

The discovery of female physicality and sensuality 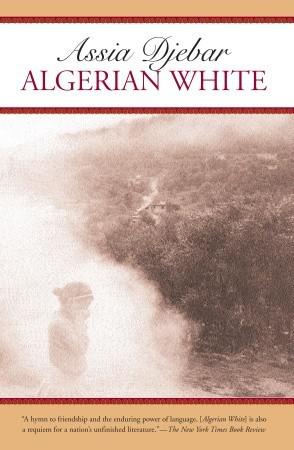 Assia Djebar caused a stir in 1996 with her novel "Algerian White: A Narrative" in which she describes her horror at the Algerian civil war, the "black decade" that brought violence and terror to her native home

Feminine self-discovery was already a theme in her early works, which earned her the reputation of an Algerian Sagan and made the use of a pseudonym necessary. The reason was that the subject matter she dealt with in works like "La Soif" (1957, English: "The Mischief"), "Les impatients" (1958), "Les enfants du Nouveau Monde" (1962, English: "Children of the New World"), and "Les Alouettes naïves" (1967) were absolutely taboo for young women in the Arab world and, as such, revolutionary: love and partnership, the discovery of female physicality, and sensuality.

After a break in the 1970s, during which Assia Djebar filmed two documentaries on women in her homeland, "La Nouba des femmes du Mont Chenoua" (1979 winner of the International Film Critics' Prize at the Venice Biennale) and "La Zerda et les chants de l'oubli" (1982 winner of the Special Prize for the best historical film at the Berlinale), she returned to writing in French in the 1980s. From this point onwards, her writing was characterised by the "shadowy voice of women in the shadows" and highlighted with sprinklings of Arabic and Berber, a sense of spoken language, polyphony, cinematic montage techniques and fluid elegance.

Under Djebar's masterly gaze and for the first time, Franco-Algerian, Arab-Berber, Islamic "history" yields to a "herstory." Her concept of an artistic intertwining of fact and fiction, autobiographical fragments and historical documents results in a sharp break with clichés and offers new perspectives. One example is how the author fuses official French historical sources with the reminiscences of Algerian grandmothers and great-grandmothers in "L'Amour la Fantasia". Again, in 1987 in her "Ombre Sultane" (English "A Sister to Scheherazade"), she refers back to the solidarity between the sisters Scheherazade and Dinarzade in "The Arbian Nights" in order to create a genuinely Arab model of female emancipation.

In her 1995 "Vaste est la prison" (English: "So Vast the Prison"), she casts an eye on the rich past of the region, which still bears the traces of Greek and Roman culture, in order to combat the dictates of an Arab-Islamic monoculture. Her novel "Loin de Médine" (1991, English: "Far from Medina") features two dozen female characters from the early period of Islam, thereby contrasting a substantiated female vision with the "caricature of an original Islam" as envisaged by Algerian fundamentalists in the early 1990s.

It proved to be of little use, however. She reacted to the "black decade" of the 1990s, which shrouded Algeria in blood and terror, in her own discrete manner with two painful texts: the lament "Le blanc de l'Algérie" (1996, English: "Algerian White") and a volume of short stories, "Oran, langue morte" (1997, English: "The Tongue's Blood Does Not Run Dry: Algerian Stories").

In the summer of 2000, she successfully adapted fourteenth century source texts from the chronicles of Ibn Saad and Tabari that dealt with the death of the Prophet Muhammad and the disfranchisement of women for the Roman opera "The Daughters of Ishmael in Wind and Storm."

"We should not waste our time with self-censorship"

This was her response in 2001 to the question of whether she feared Islamist threats. Her dream of "one day seeing women as muezzins atop minarets" was not to be fulfilled during her lifetime.

On Friday, 13 February, Assia Djebar, who had spent the last few decades of her life in exile, who had held the chair for Francophone literature in Louisiana and New York, and, as President Bouteflika proclaimed, "epitomised the image of Algeria with grace and eloquence around the world," was buried in her homeland in Cherchell. She was laid to rest in the same cemetery as her father, the school teacher who 72 years previously had accompanied his daughter in her first tentative steps towards freedom. Beforehand, mourners paid their final respects in the community library, where her body lay in state.

Her voice, which resounded as clear as a bell, which unmistakably and enchantingly rose out of the sea of history and captivated people around the world, is now silent. Her words, like "twittering birds", will continue to circle over the heads of mankind. And her work, says a mourning compatriot, "will serve as an eternal foundation stone for our collective memory."

"Merci Assia," wrote Maissa Bey on her Facebook page. "You should know that you will always be the one who showed us the path to take in order to write. May your struggle, today more than ever before, also be our own."

Home
Print
Newsletter
More on this topic
Assia Djebar: The clear but fragile force of writingLiterature and collective trauma in Algeria: Moving beyond the examination of historyInterview with the Algerian novelist Yasmina Khadra: "There is a life after defeat"
Related Topics
Abdelaziz Bouteflika, Arabic language, Arabic literature, Gender, German-Arab Literature Exchange, Literature, Muslim women, Women in the Islamic world
All Topics

Algerian scholar Said Djabelkhir rejects the charge of "offending Islam". In interview with Ismail Assam, he maintains that he has been wilfully misconstrued. At the same time, he ... END_OF_DOCUMENT_TOKEN_TO_BE_REPLACED

Saturday's historically low election turnout was a reflection of Algerians' ongoing frustration with the political status quo. Faced with mounting state repression, however, the ... END_OF_DOCUMENT_TOKEN_TO_BE_REPLACED

Morocco and the European Union are at cross purposes when it comes to the Western Sahara. And, as Germany does not support Moroccan claims to the territory, a major conflict has ... END_OF_DOCUMENT_TOKEN_TO_BE_REPLACED

Recep Tayyip Erdogan, disappointed by the European Union’s reluctance to integrate Turkey into its ranks, has re-directed his country’s diplomacy toward the Maghreb and Africa to ... END_OF_DOCUMENT_TOKEN_TO_BE_REPLACED

Using a graphic novel to address a contentious issue like the Algerian war of independence may seem an odd choice, but new release "Algeriennes", translated into English by Ivanka ... END_OF_DOCUMENT_TOKEN_TO_BE_REPLACED
Author:
Regina Keil-Sagawe
Date:
Mail:
Send via mail

END_OF_DOCUMENT_TOKEN_TO_BE_REPLACED
Social media
and networks
Subscribe to our
newsletter