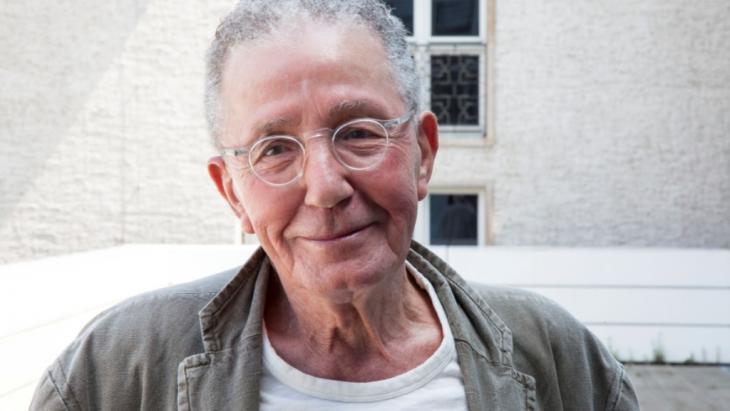 Obituary: the Algerian writer Malek Alloula
A prophet unaccepted in his own country

The renowned Algerian essayist, literary scholar and poet Malek Alloula died in February at the age of 78. His ex-wife, the writer Assia Djebar, had died in exile in Paris only a few weeks previously. By Suleman Taufiq

Malek Alloula was a child of the French colonial era. He was born in 1937 in Oran, a port city in Western Algeria steeped in history. The city is still considered the most liberal and cosmopolitan in Algeria. This was the atmosphere in which Alloula grew up.

He was one of the few Algerians who had the privilege of attending a French school. The cultural alienation that came with French colonialism was tremendous – so much so that Alloula sensed it while he was still at school: "We spoke Arabic at home, but at the French-speaking school we only learned the history of France. For us, the Arabic language was a foreign tongue in our own country."

There were hardly any schools where Arabic was taught, apart from the Koran schools. As a result, following the Algerian War and liberation from the French colonial power, many Algerians were illiterate.

Malek Alloula went on to study literature at the "Ecole Normale Superieure" (ENS) in Algiers. In 1960, he moved to Paris and continued his studies at the Sorbonne, where he obtained his doctorate with a thesis on the French philosopher and writer Denis Diderot. 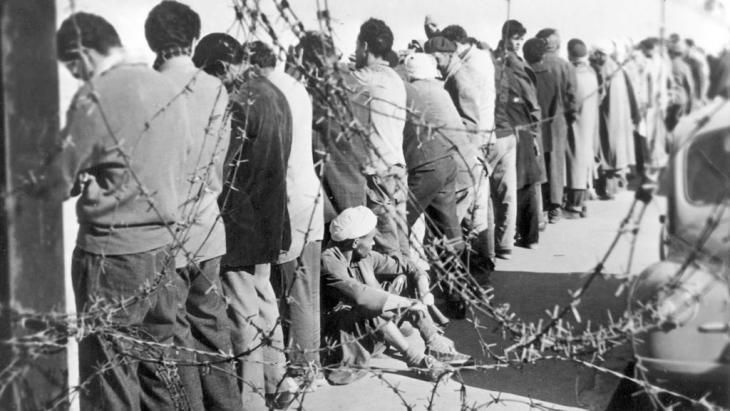 Algerians arrested in Oran in December 1956 stand facing a wall, waiting to be interrogated. According to Suleman Taufiq, "the cultural alienation that came with French colonialism was tremendous – so much so that Alloula sensed it while he was still at school: 'We spoke Arabic at home, but at the French-speaking school we only learned the history of France. For us, the Arabic language was a foreign tongue in our own country.'"

Searching for an identity of his own

Paris eventually became his place of exile, and remained so until his death. At that time, his homeland was not yet in a position to address and come to terms with its recent colonial past. In fact, for many years, the Maghrebi country continued to suppress and falsify its own cultural history.

Of course, this process of cultural suppression and alienation also played a part in enabling some authors to distance themselves from the social restrictions of their homeland, to break taboos and to call political and religious dogmas into question. However, this step also involved a fundamental questioning of themselves, and the resultant need to search for a new, independent identity.

Even in later years, Malek Alloula's writing repeatedly centred on the loss of his own language, culture and history. Even his strongly autobiographical volume of novellas "Le cri de Tarzan" (Tarzan's cry), which came out in 1997, brought back to life memories of his childhood in Algeria. In it, he described his formative impressions of a Tarzan film in the same way he depicted scenes of everyday life, without any kind of pathos.

"Fertilisers of the colonial vision"

"Le Colonial Harem" (The Colonial Harem), published in French in 1981, is without doubt one of his best-known works. Here, Alloula looks at the images on French colonial photographic postcards, which he terms "the fertilisers of the colonial vision".

He collected postcards of Algerian women that were produced by French companies between 1900 and 1930. The posed studio shots were made to look as though they were snapshots from the everyday lives of the women they depicted. As a rule, the French photographers showed the women as helpless and half naked. The photos then provided the French with proof of the immodesty and backwardness of Algerian women, but they also acted as a stimulus for the viewer's sexual fantasies. They represented – as was only to be expected – mere projections of the Orient: projections that revealed more about the desires of Frenchmen than the reality of Algerian women's lives. 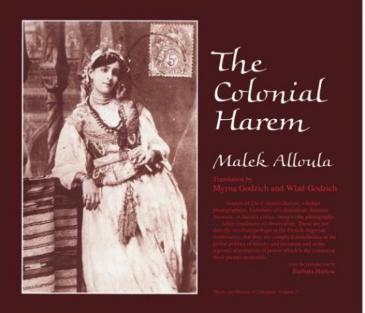 For his book "The Colonial Harem", Malek Alloula collected postcards of Algerian women produced by French companies in the early twentieth century. "They represented – as was only to be expected – mere projections of the Orient: projections that revealed more about the desires of Frenchmen than the reality of Algerian women's lives," says Suleman Taufiq

Moving around and living in a foreign country proved formative for Alloula's literary style. His life in exile reinforced his sensibility for certain topics. In some of his writing, such as the short story "Paysages d'un retour", published in Paris in 2010, Alloula told the story of a man who goes back to his home village in Algeria. Here, his fiction deals with the disappointments and losses that he himself had experienced and observed there.

His literature always returned to the cultural memory of Algeria, its distortions and shifts, acutely observed and described by Alloula without any illusions, and without lapsing into idealisation of his country.

An exile in literature

In 1994, Islamists murdered his brother Abdelkader Alloula, an important Algerian theatre director and intellectual. In his honour, Malek Alloula set up the foundation known as "Association Abdelkader Alloula", which he led from then on. Around this time, he also published a volume of collected memories of and tributes to his brother, as well as translations into French of two of his plays ("En mémoire du futur").

All his life, Alloula longed for his native city, Oran, and for Algiers: "Time has robbed me of many beautiful memories. Only longing now links me to them."

His writing bear witness to merciless hardship and beautiful poetic language. Alloula was to remain an exile for the rest of his life, even in literature. It is also a great shame that his books have still not been translated into Arabic. Even in his homeland of Algeria, they have not had the success they really deserved. As so often in history, the saying holds true here: "No prophet is accepted in his own country". In what may have been his last poem, he wrote:

"It is a word to which I always return,
at nightfall,
a traditional old blindness,
in which I discover once more the perfect sense,
from where these voices emanate,
to speak so calmly of death,
as a lamp extinguished before the debacle."

Home
Print
Newsletter
More on this topic
Malek Alloula: A peep inside the haremObituary: the Algerian author Assia Djebar: Trailblazer for her country, her gender and her continentLiterature and collective trauma in Algeria: Moving beyond the examination of history
Related Topics
Algerian War, Arabic language, Arabic literature, Colonialism, Languages, Women in the Islamic world
All Topics

It is possible to write about the Holocaust and the crimes of colonial powers without downplaying anything. In her latest book, Charlotte Wiedemann focuses on the numerous blind ... END_OF_DOCUMENT_TOKEN_TO_BE_REPLACED

For the first time since 1989, Algeria‘s authoritarian regime has sent a military parade marching through Algiers. A formidable show of strength designed to impress rival regional ... END_OF_DOCUMENT_TOKEN_TO_BE_REPLACED

Algeria‘s regime is again cracking down on anti-fracking activists and the unemployed in the country‘s south. Yet EU countries remain keen to scale up their energy cooperation ... END_OF_DOCUMENT_TOKEN_TO_BE_REPLACED

Algeria's decision to unilaterally sever diplomatic ties with Morocco in August 2021 – days after the presidency announced in a statement their relations would be reviewed – was ... END_OF_DOCUMENT_TOKEN_TO_BE_REPLACED
Author:
Suleman Taufiq
Date:
Mail:
Send via mail

END_OF_DOCUMENT_TOKEN_TO_BE_REPLACED
Social media
and networks
Subscribe to our
newsletter