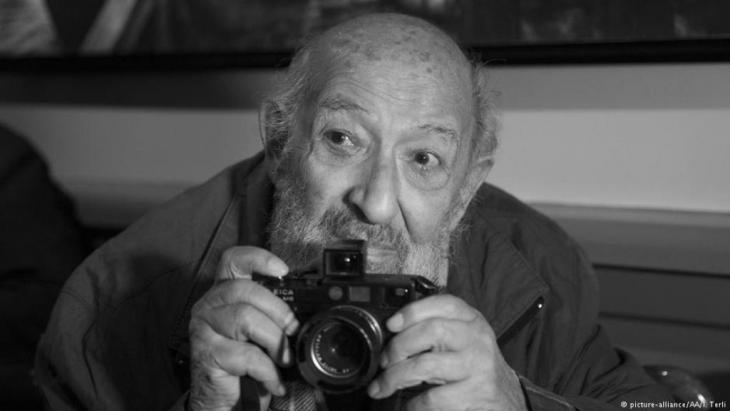 Chronicler of a bygone age

Turkey's most famous photographer, Ara Guler, has died in Istanbul at the age of 90. With his images of both the people and places of the Turkish capital, Guler has done more than any other to keep the memory of the city as it used to look alive. By Marian Brehmer

The very mention of the name Ara Guler instantly brings one particular image to my mind: I see a fisherman standing on his boat in the early morning light, bringing his catch home to the harbour in the Istanbul district of Kumkapi. The man is wearing a neat suit and a French-style cap. At first glance, it strikes the beholder that he is far too well dressed to be dragging in nets on the rough open seas.

Arms spread out wide and leaning on the wheelhouse of his little boat, he gazes out across the water with a melancholy expression on his face. This pensive scene is framed by dramatic cloud formations and the dark silhouette of the Blue Mosque on the horizon, giving the photo an almost apocalyptic atmosphere. At the same time, however, the image, which dates from 1950, exudes a sublimity and dignity that is only to be found in the most masterly black-and-white photographic compositions.

The man behind this photograph, who is known in Turkey as "Istanbul’un Gozu" (the eye of Istanbul), passed away in hospital on 17 October following a heart attack. He was 90 years of age. Guler was born into an Armenian family in 1928, five years after the foundation of the modern Turkish Republic. After attending an Armenian secondary school, he went to work in a film studio before taking a course in film dramaturgy.

However, he soon decided to pursue a career as a photo journalist. His first job as a photographer was with the Turkish daily "Hurriyet". International jobs followed. When the magazine "Time Life" created the post of correspondent in Istanbul in 1958, Guler's star began to ascend: at the age of 30, his talent was soon in demand around the globe. Only ten years later, his photographs were on display in the Museum of Modern Art in New York.

A sense of the mystical

Guler was a master of the fleeting moment. Many of the scenes he captured with his camera were entirely fragile; they live from the moment in which Guler aimed his lens and focussed, whether it was on a simit-seller (a simit is a sesame-encrusted ring of bread) climbing a hill in the old district of Fatik, a drunkard in a traditional "Meyhane" (an Istanbul wine bar), or a stork at the ablution fountain in the inner courtyard of the Eyup Mosque.

Some of his images even have a mystical touch, especially those of graveyards, Sufi tekkes (centres) or mosque courtyards. Indeed, the character of the places he photographed is captured so well in his images, it is as if Guler was able to communicate with these places as he photographed them. 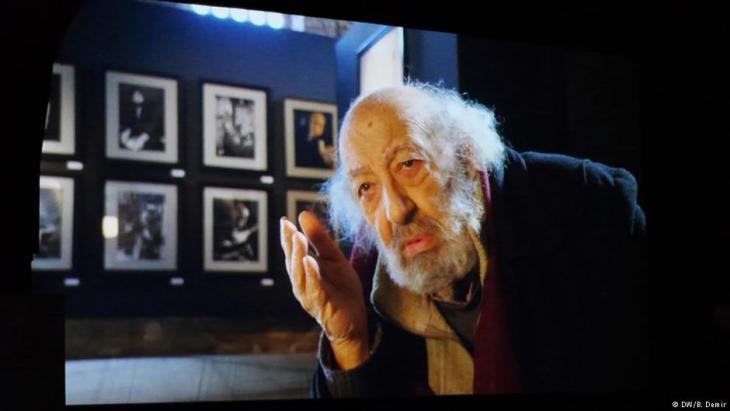 Turkish photographer Ara Guler was showered with awards for his work: in 1961 the "Photography Annual" listed him as one of the seven best photographers worldwide. In 1968 Guler was voted one of the "Ten Masters of Colour Photography" by the Museum of Modern Art in New York

Above all, Guler's photos of Istanbul show us how ordinary people lived: the fisherman, the worker, the day labourer, the travelling salesman and the migrant from the village who moved to the shores of the Bosphorus in the hope of a better life. Photographing people was right at the heart of Guler's approach to photography. He viewed photography as a medium for capturing people's lives and suffering.

Guler felt that it was his obligation as a photographer to create a human memory and he saw himself as a visual historian. According to the biography on his official website, "art can lie, but photography only reflects the reality".

Those who look at Guler's images of Istanbul see a city that no longer exists in this form. Although the mosques and monuments remain as unchanged as the blue of the Bosporus, their context is not what it was.

The architectural constants of the city are now embedded in an urban transformation that has swept over the metropolis at speed. And so, many citizens of Istanbul – especially those moving in intellectual and artistic circles – look at Ara Guler's images of Istanbul with more than a touch of nostalgia, nay even grief.

The chronicler of Istanbul

Nevertheless, Ara Guler's greatest service was undoubtedly his loyal fascination with the city of Istanbul. As a chronicler of the city, he never moved away from Istanbul and immortalised both the beautiful and ugly sides of the city for all time.

Ara Guler, whose eyes have now closed forever, did not live to see the opening of the huge airport to the north of the city that will usher in the dawn of a new era in Turkish aviation at the end of October. The airport is just one of a large number of controversial projects initiated by the Turkish government.

However, looking at Ara Guler's images, many will continue to yearn for another Istanbul, an Istanbul that moved at a much gentler pace: the Istanbul of little fishing boats, bumpy lanes and tea houses. Peppered across the city, only a few such places now remain.

At least 150 theatre professionals were recently fired without reason in Turkey, just days before they were expecting to receive permanent contracts. Creatives accuse the ... END_OF_DOCUMENT_TOKEN_TO_BE_REPLACED

Political analyst Taqadum al-Khatib argues that Egypt can, in co-ordination with its European partners, develop a common vision to solve the complex conflict in Libya. For this to ... END_OF_DOCUMENT_TOKEN_TO_BE_REPLACED

Turkey's President Erdogan wants to create a second Bosphorus. The cost to the economy and environment would be enormous – and that's why Istanbul's mayor is attempting to stop ... END_OF_DOCUMENT_TOKEN_TO_BE_REPLACED

Libya is in turmoil and no political solution is in sight. The EU's inability to take concerted action in the country, meanwhile, is being exploited by third parties, such as ... END_OF_DOCUMENT_TOKEN_TO_BE_REPLACED

Taking the Fridays for Future movement as his starting point, Muslim environmental expert Tarik Quadir talks to Marian Brehmer about the connections between Islam and ... END_OF_DOCUMENT_TOKEN_TO_BE_REPLACED

There are only a few thousand Aramaic Christians left in south eastern Anatolia. And they are intent on preserving their ancient culture dating back one-and-a-half millennia. ... END_OF_DOCUMENT_TOKEN_TO_BE_REPLACED
Author:
Marian Brehmer
Date:
Mail:
Send via mail