A Cosmopolitan Envoy of Freedom

The Egyptian film director Youssef Chahine, the enfant terrible of Arab cinema and the only Arab director to have gained international recognition, died in Cairo at the age of 82 on 27 July. Ludwig Amman pays tribute 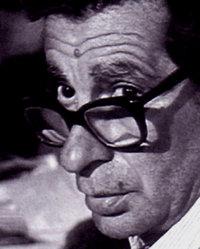 ​​It was an unforgettable scene: Youssef Chahine, the world-famous Egyptian director, walked into his Berlin hotel very late, as his flight had been cancelled. He lit up a cigarette and sat right down for his first interview in the foyer.

And he kept up the pace – for three whole days, in three German cities, from early morning to late at night, smoking countless cigarettes and putting a contagious spark into everything he said. At that time, he was 72 years old – and beat everyone else hands down.

This man was a power plant; he burned for what he believed in. He was aflame for the film he had just made – 1997's Destiny: Al-Masir – a stirring manifesto against Islamic and all other kinds of fundamentalism in the guise of a philosophical musical, in which the great Muslim free-thinker Ibn Ruschd (Averroes) wins out over his bigoted opponents despite book-burnings and exile – by the power of the credo signed by Chahine in the final frame: "Thoughts have wings. No one can prevent them from flying!"

That was the message for which Chahine stood throughout his life, the freedom for which he fought, with the enthusiasm or even furore of a man possessed. In another day and age, he might have been destined to be a prophet.

Instead he became a critical filmmaker, who hoped to the very last that he might convert an entire nation – to values he would never have thought of denouncing as western. What he believed in was universal. Destiny: Al-Masir was his thirtieth film.

Award for his life's work in Cannes 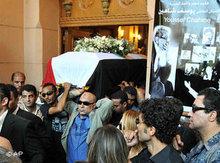 Hundreds of Egyptians took part in Youssef Chahine's funeral. His death marks the end of a chapter of Arab cinema culture

​​In 1997, Chahine had long since become a legend, the only Arab director to gain international recognition. That year the Cannes film festival celebrated its fiftieth anniversary, honouring its favourite filmmaker with a unique award for his life's work. The prize brought Chahine a sensational 600,000 viewers at the French box office.

Some 15,000 people watched the film in Germany – a surprising success. For the days when German public television had proudly presented great cinematic art from Egypt were over by then.

Things looked different back in 1978, when Youssef Chahine revolutionised Egyptian film for the second or third time. Following a heart attack that forced the workaholic Chahine to take a break in his punishing schedule, the film Alexandria...Why? was his first openly autobiographical work, launching a tetralogy that was to accompany him for the rest of his life.

A young man in 1942 Alexandria dreams of studying film-making in the USA, as Chahine did from 1946 to 1948, but has a patriotic fear of Americanisation – a love-hate relationship with America that Chahine took to polemic heights in the 2004 film Alexandria... New York and which could not be more Arabic.

Beyond all religious and social barriers

​​A Muslim man falls in love with a Jewish woman, an Englishman with an Arab and rich with poor – that was Chahine's home, the cosmopolitan and polyglot port of Alexandria, where he was born to a Greek Catholic family in 1926, only to experience the utopia of people living together beyond all religious, social, national and sexual barriers.

Of all the masterpieces that Youssef Chahine gave the world, Alexandria...Why? was the most daring in every respect, winning the Silver Bear at the Berlin Film Festival.

And yet no one who has ever seen the 1957 film Cairo: Central Station will ever forget how Chahine himself played the fabulously ugly and poverty-stricken newspaper-seller, driven to murder by passion – a heart-rending neo-realistic drama of the soul that even today perfectly reveals the dire pain of anachronistic sexual morals.

None of his films broke box-office records in Egypt, despite their music and dancing – apart from the most recent: Chaos, in cinemas last year. The film tackles police corruption, torture and rape.

The time is ripe for brutally honest self-criticism in Egypt, as the success of the film adaptation of Alaa al-Aswani's novel The Yacoubian Building shows. Youssef Chahine, who died in Cairo at the age of 82 on 27 July, was lucky enough to experience this ray of light on the horizon of a blockaded society.

Ludwig Ammann is an renowned expert on Islam who has written several books on Islam in the modern world. He has also worked as a distributor for films from the Middle East, including works of Youssef Chahine.

Youssef Chahine: "Chaos"
Sympathy with the Upright Citizens of Egypt
Chaos is Youssef Chahine's most recent film. The 81-year-old master of Egyptian cinema has made a social comedy that also makes digs about corruption and arbitrary policing. Ariana Mirza went to see it

Interview with Youssef Chahine
"Tenderness Has Dissapeared"
Youssef Chahine is the grand old man and the enfant terrible of Arabian cinema. Moritz Behrendt and Christian Meier met the 80-year-old director in Cairo, who on the occasion certified his reputation as one of the most vociferous critics of Egyptian politics

END_OF_DOCUMENT_TOKEN_TO_BE_REPLACED
Social media
and networks
Subscribe to our
newsletter