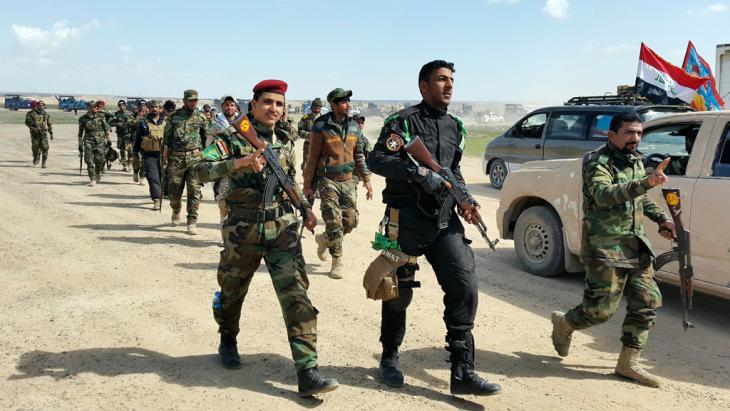 Offensive against IS in Iraq

Sowing the seeds of the next disaster

With their keen fighting spirit, the Shia militias may well be an effective weapon in the fight against Islamic State in Iraq. However, this is quite literally a case of casting out the devil that is IS with the Beelzebub that is the Shia militias, says Karim El-Gawhary

It is the largest ground offensive that has ever been launched against the jihadis of Islamic State (IS). Last Sunday (1 March 2015), Iraqi Prime Minister Haider al-Abadi announced what he called "hour zero" for the offensive to recapture the Iraqi town of Tikrit, the symbolically important birthplace of Saddam Hussein. Then, according to Iraqi television reports, 30,000 soldiers and fighters backed up by artillery and Iraqi Air Force bombardments began to advance on the town on several fronts.

If this new offensive is successful, it would not only liberate the Iraqi province of Saladin from IS. The recapture of Tikrit would also clear the path from the south to the city of Mosul, because the highway that runs between Baghdad and Mosul runs through Tikrit. But the battles are expected to be protracted and heavy. IS fighters have had months to entrench themselves in the contested region. The current offensive is unlikely to come as much of a surprise to them, and the Iraqi army has already experienced major problems in campaigns to win back significantly smaller places.

The "cowards" from the ranks of the regular army

The offensive is also the biggest test case for the combative capability of the regular Iraqi army. Thus far, troops have earned themselves a reputation for cowardliness when – after years of training alongside the US army – entire divisions ran away from IS jihadis in panic last summer, leaving behind the entire US weapons arsenal.

Tikrit and the surrounding region represent Iraq's Sunni heartland. Many of its residents felt that they had been politically and economically sidelined by the Shia-controlled central government in Baghdad in recent years. There is some overlap here between the militant Islamists and the old cadres of the former Baathist ruling party of Saddam Hussein. This is also a reason why it was easy for IS fighters to capture Tikrit last summer. 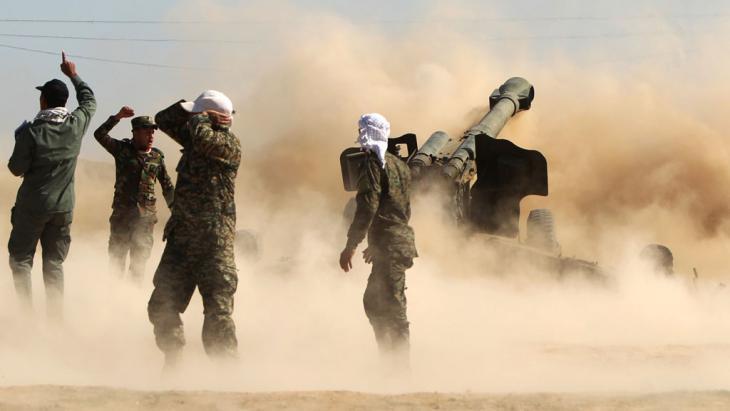 Shia volunteers in the fight against IS outside Tikrit: it is thought that between 3,000 and 5,000 Shia militiamen will be fighting alongside the Iraqi army during the operation. According to human rights organisations, there is detailed documentary evidence that Shia militias have carried out arbitrary killings and burned down houses during past operations in Iraq

What looks at first glance like a promising step, to force back the IS jihadis and reduce the size of their caliphate with military force, is actually sowing the seeds of the next disaster: there's a huge grey area concerning just how regular and just how Shia the Iraqi troops are. Also, reports that the commander of the Iranian Quds brigades, Qassem Soleimani, is leading the entire Iraqi operation as a kind of Iranian "shadow chief of staff", are likely to increase Sunni scepticism regarding this offensive.

The dubious reputation of the Shia militias

But what is really problematic is the open participation of Shia militias in this military action. The numbers fluctuate, but it is thought that between 3,000 and 5,000 Shia militiamen are fighting alongside the Iraqi army during the operation. In the course of smaller-scale offensives in recent months, primarily in the province of Diyala, these fighters are said to have wrought havoc on captured Sunni territories. Indeed, several human rights organisations have detailed documentary evidence of arbitrary killings and the burning down of houses by Shia militias during past operations.

For the Shia militiamen, any Sunni who has not fled his village to escape IS is a potential collaborator. In addition, the Iraqi Interior Minister Mohammed Ghabban, who is supposed to be providing security with an advancing police contingent, is a person with a proven Shia militia past who also has Sunni blood on his hands.

For the predominantly Sunni inhabitants of Tikrit and the surrounding area, this means first and foremost: either they flee to another Sunni area controlled by IS – and this would be tantamount to ethnic cleansing – or they remain in their villages and wonder which is worse: to be terrorised by IS henchmen or massacred by Shia militias.

With their keen fighting spirit, the Shia militias may well be an effective weapon in the fight against the jihadis in Iraq. However, this is quite literally a case of casting out the devil that is IS with the Beelzebub that is the Shia militias.

Home
Print
Newsletter
More on this topic
Strategies against Islamic State: The case against an alliance with AssadStrategies for combating IS: Plea for a wide-angled view of the Arab worldPortrait: Qassem Soleimani: The man who pulls the stringsIraqi crisis: The expected death of a nationFighting in the Iraqi province of Anbar: "Maliki is the new Saddam!"
Related Topics
'Islamic State' | IS, Haider al-Abadi, Jihadism | Jihadists, Saddam Hussein, Shia Islam | Shiite Muslims, Sunni Muslims | Sunni Islam, Sunni-Shia tension
All Topics

Reading Hassan Blasim's God 99 is an immersive experience of grief and exaltation, anger and disgust, writes Marcia Lynx Qualey. We join the Iraqi narrator as he sits around in ... END_OF_DOCUMENT_TOKEN_TO_BE_REPLACED

By stage-managing his re-election in a poll widely dismissed as a farce, Syria's President Bashar al-Assad has killed two birds with one stone: he has forced his compatriots to ... END_OF_DOCUMENT_TOKEN_TO_BE_REPLACED

In his book "Ground Zero: 9/11 und die Geburt der Gegenwart" (Ground Zero: 9/11 and the Birth of the Present) Islamic scholar Stefan Weidner analyses the consequences of the ... END_OF_DOCUMENT_TOKEN_TO_BE_REPLACED

The rollout of coronavirus vaccines in the Middle East and North Africa is already taking place on a massive scale, with the United Arab Emirates leading the way. Nevertheless, ... END_OF_DOCUMENT_TOKEN_TO_BE_REPLACED

German Middle East analyst Guido Steinberg and television journalist Ulrich Tilgner have both published new books on the conflicts in the Middle East. Their analyses and their ... END_OF_DOCUMENT_TOKEN_TO_BE_REPLACED

END_OF_DOCUMENT_TOKEN_TO_BE_REPLACED
Social media
and networks
Subscribe to our
newsletter