Auty (2012) offers a good overview of the literature on the topic of ″oil and development″ and the political economy of oil in the Middle East and North Africa (MENA) in the past 40 years. In the high-price phase from 1973 to 1982, high profits from oil exports largely served to expand the public sector in the MENA region. The ruling elite fed its patronage networks and thus consolidated its political power. However, the state administrations became ever more inefficient.

Populous oil states like Algeria, Iran and Iraq pursued a strategy of state-controlled import-substitution, trying to make the most of oil money by establishing petrochemical and steel industries. 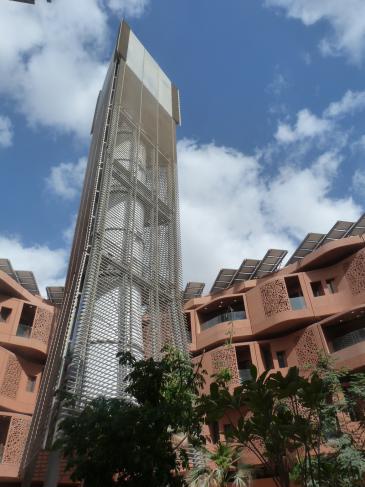 "Masdar City" – the United Arab Emirates′ oasis: the small states and emirates are already preparing for a post-oil existence. "Ecotopia" is what some are calling the project to create an emission- and rubbish-free city in the desert of Abu Dhabi. The Emiratis plan to invest 22 billion euros in this pioneering urban project

But when the oil prices started to fall in 1985, they shelved investment plans and cut back large-scale social programmes, which was far more difficult politically. In the belief that prices would rise again soon, the governments also started dipping into their foreign-exchange reserves, and they took loans to finance budget deficits.

No transformation of rentier economies

Accordingly, external debt more than trebled in the MENA region from 1985 to 1996. But lessons were learned. In the high-price phase from 1999 onwards, governments saved more and reduced their debt levels. A number of countries followed Norway′s example by establishing sovereign wealth funds, into which they invested extra revenues. What did not happen, however, were structural reforms that would have transformed rentier economies into productivity-driven economies.

Heilbrunn (2014), by contrast, emphasised the opportunities presented by oil wealth. In ″Oil, democracy and development in Africa″ he concluded that over decades of oil production, many countries underwent a subtle economic transformation. According to him, oil money leads to pockets of capital accumulation, so domestic investments were attracted. A domestic market emerged for financial and insurance services, homebuilding, consumer goods and the entire range of products that the oil industry needs.

These new activities sparked the development of a middle class. Businesses engendered by oil money, moreover, made it vital to define rules and ensure that new economic sectors run smoothly. The consequence was institutional development, which, according to Heilbrunn, turned out better in countries with a favourable historical background.

The Saudi national team is set to play the German Olympic squad at the Olympics in Tokyo later this month – a chance for the outsiders to make their mark. At the same time, and ... END_OF_DOCUMENT_TOKEN_TO_BE_REPLACED

As the Biden administration attempts to promote democracy and human rights in the Middle East, it will confront the deep-seated belief among Arabs that U.S. policies are unfair to ... END_OF_DOCUMENT_TOKEN_TO_BE_REPLACED

While Europe and North America experience something like a return to normality with relatively high vaccination provision and take-up rates, the rest of the world is struggling to ... END_OF_DOCUMENT_TOKEN_TO_BE_REPLACED

Philosopher Juergen Habermas was due to be awarded a major Arab prize in Abu Dhabi, but has turned it down following criticism. This decision torpedoes Arab efforts at a ... END_OF_DOCUMENT_TOKEN_TO_BE_REPLACED

END_OF_DOCUMENT_TOKEN_TO_BE_REPLACED
Social media
and networks
Subscribe to our
newsletter