With money at their disposal, many African governments spent more on poverty reduction, education and health care, which in turn opened up new economic prospects for the people. Heilbrunn does not deny that the oil boom had negative impacts, including Dutch disease, corruption and resource-motivated armed conflict, on some countries. Overall, however, he concludes that oil production is a dynamic and open process that can steer a country in different directions.

Overall, it is clear that closed theories like Karl′s take too little account of the historical dimension, especially the long-term nature of development. Country comparisons, such as the one carried out by Sachs and Warner, use highly aggregated variables, so it is difficult to form a sufficiently clear picture of institutional factors and the various policy measures taken by the respective ruling elites. 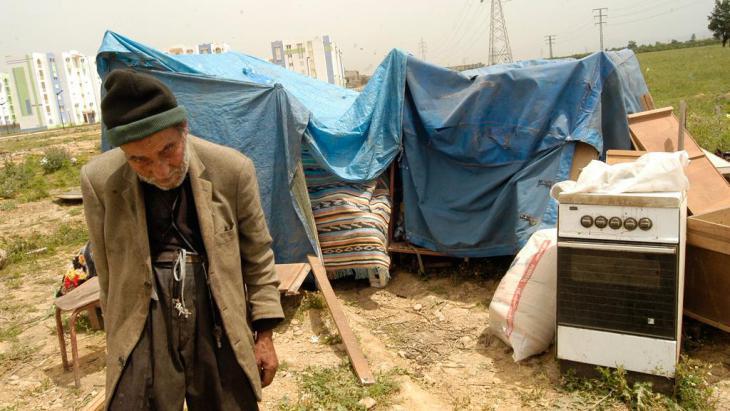 Poverty despite a resource-rich economy: Algeria – leading oil producer and Europe′s second largest gas supplier after Russia – has been swamped with petrodollars since the onset of the fourth oil crisis in 2003. Yet the discrepancy is alarming: while the state lines its pockets, the Algerian population becomes increasingly impoverished

Above all, it is important to take a close look at the countries compared. Given the different history, it is not surprising that industrial countries have better governance indicators than resource exporting ones. Such comparisons do little to explain the impacts of oil. As Peters (2014) points out, many of the negative features noted in oil states – authoritarian rule, patronage networks, corruption and fiscal crises – also apply to countries that do not have oil. The ″resource curse″ approach does not explain the matter, which requires closer reflection.

Against this backdrop, Heilbrunn′s focus on the historical background of the oil-producing states is quite convincing. The historical perspective leads to the conclusion that processes of social change take place subtly and take time. And that is also confirmed by the long-term study conducted by Cavalcanti, Da Mata and Toscani.

There thus seems to be no automatic determinant of the failure or success of resource-rich countries. On the contrary, they result from an open-ended dynamic process that depends on a number of largely historical, country-specific factors.

Nassir Djafari is a former KfW economist and a freelance writer.

Eifert, B., Gelb, A., Tallroth, N. B., 2002: "The political economy of fiscal policy and economic management in oil exporting countries", World Bank

The Saudi national team is set to play the German Olympic squad at the Olympics in Tokyo later this month – a chance for the outsiders to make their mark. At the same time, and ... END_OF_DOCUMENT_TOKEN_TO_BE_REPLACED

As the Biden administration attempts to promote democracy and human rights in the Middle East, it will confront the deep-seated belief among Arabs that U.S. policies are unfair to ... END_OF_DOCUMENT_TOKEN_TO_BE_REPLACED

While Europe and North America experience something like a return to normality with relatively high vaccination provision and take-up rates, the rest of the world is struggling to ... END_OF_DOCUMENT_TOKEN_TO_BE_REPLACED

Philosopher Juergen Habermas was due to be awarded a major Arab prize in Abu Dhabi, but has turned it down following criticism. This decision torpedoes Arab efforts at a ... END_OF_DOCUMENT_TOKEN_TO_BE_REPLACED

END_OF_DOCUMENT_TOKEN_TO_BE_REPLACED
Social media
and networks
Subscribe to our
newsletter