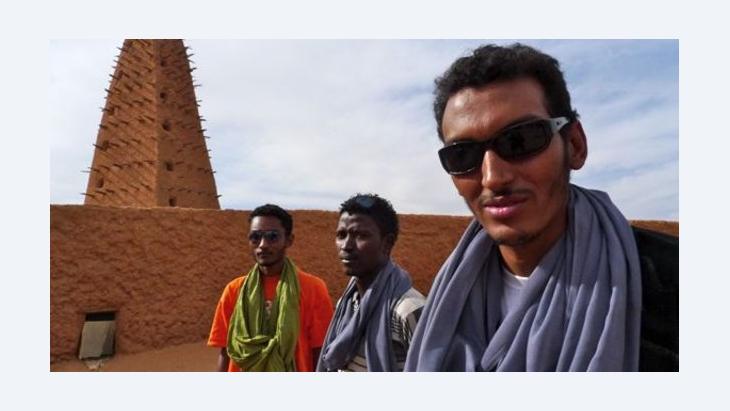 Rebel Music from the Sahara

﻿After years of struggle, many of the Tuareq rebels have switched to making music in order to promote their people's cultural identity. One of the most remarkable "former rebel musicians" is Omar "Bombino" Moctar. Richard Marcus introduces the man and his music

There's a lot of history that comes with this recording, not just of the person who has made the recording, but something like 1400 years of a people's, and a place's, history. Writing about the music on this album without touching upon any of that would be ignoring at least half of what has gone into the music's creation.

So, while people don't read a critique of an album for a social or political history lesson, the specifics of this man, this music, these people and this land are as important to talk about as the music. As you'll see, in some ways, that's the point of the music in the first place.

The land is some of the harshest in the world, the Sahara desert, specifically the parts of it which fall within the boundaries of Algeria, Mali, Burkina Faso and Niger. The people are the Kel Tamasheq, more commonly referred to by the name Tuareg. Nomads and herdsmen, they have guided caravans from Algeria to Niger and raised their flocks throughout the Sahara for centuries.

From machine guns to guitars

Steadfastly refusing any outside influence they have fought to remain independent against any and all who have tried to control them. The music has roots that can be traced back through the history of the people, to the electric guitars of modern rock icons Jimi Hendrix and Jimmy Page, and the armed rebellions against the Niger and Malian governments during the 1980s by the Kel Tamasheq. For it was veterans of those uprisings who put down their machine guns, picked up guitars and changed the nature of their rebellion. 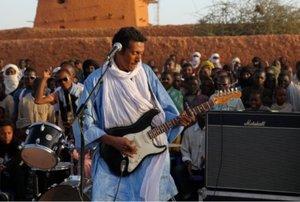 In 2010, Omar Moctar and his band play as thousands of people celebrate the end of the fighting in front the Grand Mosque in Agadez, the largest city in northern Niger

​​Omar "Bombino" Moctar, whose given name is Goumar Almoctar, was born in 1980 in a desert encampment adjacent to Agadez in western Niger. When the Niger government lashed out against Kel Tamasheq people living in their territory in retaliation for the rebellion in the 1980s, Bombino's family fled to stay with family in Algeria. In the early part of the 1990s his family returned to Agadez when it appeared there was a chance for a settlement of the conflict with the Niger government.

While he had started learning guitar while in exile, upon his return to Agadez Bombino was taken under the wing of a more experienced musician. He was the youngest and smallest member of the band and they gave him his nickname, "Bombino", as a play on the Italian word, bambino, baby.

For as long as the peace lasted in the 1990s and into the new century Bombino's musical career grew steadily. However in 2007 the uprising began again and the Niger government began targeting "guitar players", naming them enemies of the state. When two of the musicians he played with were killed by the army, Bombino went back into exile again, this time to the west and Burkina Faso.

It was here, after a year of searching, he was tracked down by a documentary film maker named Ron Wyman who had heard a cassette of his music while making a movie about the Kel Tamasheq, "Agadez – The Music And The Rebellion". Wyman was so impressed with Bombino's music that he took him back to America where they began to record Agadez, which was released earlier this year on the Cumbancha label.

Then in 2010 the army in Niger overthrew the government and signed a peace treaty with the Kel Tamasheq rebels and exiles were again able to return home. So Wyman and Bombino returned to Agadez where they completed recording the CD and finished the movie at the same time.

Like the first generation of musicians who play what they call "Ishoumar", a derivative of the French word for unemployed, chomeurs, and which is now synonymous with 'rebel music', Bombino's sound is a mixture of the modern and the traditional. Electric guitars overlay the steady beat of the drum to create an almost hypnotic effect which wraps the listener in a cocoon of sound. 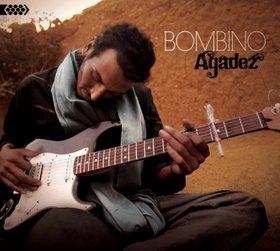 From pariah to cultural preserver and ambassador: Cover of Omar "Bombino" Moctar's "Agadez"

​​Periodically Bombino's guitar will take flight into a solo, weaving in and around the rhythm like an expression of his people's desire for freedom. Unlike far too many rock and roll guitar solos which always seem to interrupt a song, Bombino's feel like emotional extensions of the material. At times they capture his excitement and enthusiasm for the promise of the better future he obviously hopes lies in store for his people, and at others they express a yearning that can make the heart ache.

In interviews quoted in the press materials accompanying the album Bombino talks about his relationship with the desert and how it serves as his inspiration and how, like for the rest of his people, it's his home.

Of the three traditional songs on the disc he has adapted, two, "Ahoulaguine Akaline" (I Greet My Country) and "Tenere" (The Desert My Home), by their titles, tell you all you need to know about the depth of the bond between the people and the Sahara.

During the uprisings, the Niger government first banned the music of the "guitar players", then targeted the players, because their songs allegedly spread the message of the rebellion.

But the songs weren't calls to arms, rather they were reminders to the people to take pride in who they were and to hold onto their traditions. With so many of the Kel Tamsheq displaced into the cities because of drought and loss of their territories to uranium mining, those messages have become even more important as a means of helping them retain their identity and instil within them a sense of pride in who they are.

Of his original material, two of Bombino's songs, "Tigrawahi Tikma" (Bring Us Together) and "Azamane" (My Brothers United), on this disc are obviously meant to encourage his people to stand firm against anything that would take away their freedom or force them to change how they live their lives.

The Kel Tamsheq have survived this long by being able to live in one of the harshest environments on the planet and by learning how to adapt to the changing realities of the world around them. While they have fought fiercely over the centuries to preserve their independence, they also know there are many different ways to fight and win a war. The music of Omar "Bombino" Moctar and the message his songs have for his people, are one of the strongest weapons they have in their arsenal right now.

Jeddah is very different from other cities on the Arabian Peninsula, says Ulrike Freitag, historian of the Modern Middle East. In her book "A History of Jeddah", she explores the ... END_OF_DOCUMENT_TOKEN_TO_BE_REPLACED

Since the attempted coup in Turkey, President Erdogan has been pressing foreign nations to hand over schools run by the Gulen movement. Although many countries have entrusted ... END_OF_DOCUMENT_TOKEN_TO_BE_REPLACED

Can art help individuals process the experience of fleeing across the Mediterranean? Sponsored by Malteser International, the art project "Human Cargo" in Ahaus, Germany, is ... END_OF_DOCUMENT_TOKEN_TO_BE_REPLACED

How do authoritarian regimes respond to EU initiatives to stem migration? A recent publication by the German Institute for International and Security Affairs (SWP – Stiftung ... END_OF_DOCUMENT_TOKEN_TO_BE_REPLACED

Rich Saudis are investing millions in building mosques in Africa. And they are being accused of using radical preachers to destabilise the region. But there has long been much ... END_OF_DOCUMENT_TOKEN_TO_BE_REPLACED
Author:
Richard Marcus
Date:
Mail:
Send via mail

END_OF_DOCUMENT_TOKEN_TO_BE_REPLACED
Social media
and networks
Subscribe to our
newsletter