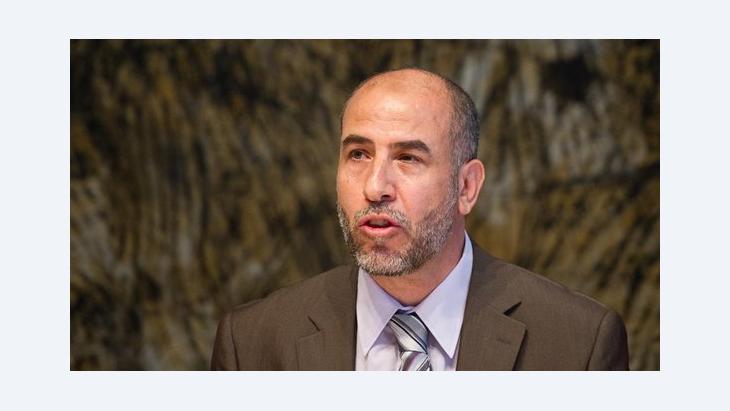 The First of His Kind

﻿Germany's first Centre of Islamic Theology was recently opened at the University of Tübingen. The head of the centre is the Koranic expert Omar Hamdan, who so far is the only professor teaching at the centre. Arnfrid Schenk spoke to the professor about his work and the degree course he is teaching

The smell of paint lingers in the air, the walls are pristine white and there are no nameplates on the doors. With one exception: on the door of an office on the first floor hangs the nameplate "Prof. Omar Hamdan, Head of the Centre of Islamic Theology". Inside, a man is sitting at his desk, holding a number of folders in his hands. His sleeves have been rolled up; he looks pretty exhausted.

"So many appointments," says Omar Hamdan as he welcomes me, "so many mails: one hundred every day from students, academics, journalists and politicians." Yesterday he attended a meeting in Stuttgart entitled "Round Table Islam" that was organized by the Social Democrat Minister for Integration in the German state of Baden-Württemberg, Bilkay Öney. He tells me that he still has to get used to the interest in his person and in his new post; after all, he adds, all he really wants to be is a theologian.

Since October, Hamdan has been head of the new Centre of Islamic Theology at the University of Tübingen. The centre is the first of its kind in Germany. Two years ago, the German Council of Science and Humanities recommended that faith-led Islamic Theology be introduced as an academic subject at German universities, a centre that would be comparable with Protestant and Catholic faculties.

The intention is that religion school teachers for Islam and imams could be trained in Germany with the support of funding from the German government. In addition to Tübingen, other centres of Islamic Studies are being set up at the following locations in Germany: Münster/Osnabrück, Erlangen/Nuremberg and Frankfurt/Gießen. Tübingen, however, was first past the post. It was a close shave, however. The first of the six chairs that are planned for the centre was only filled a few weeks before the start of the semester.

Teaching a version of Islam that is rooted in a European context: Prof. Omar Hamdan; the Minister for Integration in the state of Baden-Württemberg, Bilkay Öney; and the Federal Minister of Education and Research, Annette Schavan, at the official ceremony marking the opening of the Centre of Islamic Theology in Tübingen

​​Omar Hamdan leads me down to the basement of the small institute, which is housed in a villa. Here we find the foundation on which the new course is built: thousands of books, some of which are still packed in cardboard boxes; many of which have already been sorted into categories on the shelves. In one aisle there are books on Koranic Studies; in others law, Islamic doctrine, the theory of teaching religion ...

This is Hamdan's private library; he put it at the disposal of the institute to ensure that the course gets off to the smoothest possible start. There are no less than 3,073 volumes down here. Hamdan, who specializes in Koranic research, is quite sure of the number. After all, he bought every single one of them over the course of his academic career. Knowing exactly where to find what, he seems to be very familiar with them all.

Omar Hamdan is 47 years old. A Palestinian Sunni with an Israeli passport, he was born in Tira, a city only a few kilometres to the north of Tel Aviv. He studied Islamic Studies at the Hebrew University in Tel Aviv. In the 1990s, he came to Tübingen, studied Comparative Religious Studies and wrote his doctoral thesis under the supervision of Josef van Ess, one of the greats in the field. Hamdan's previous post saw him conducting research into the commonalities between Islam, Judaism, and Christianity in the Middle Ages at the Free University of Berlin.

When Hamdan found out that Tübingen had been chosen by the Federal Ministry of Education and Research as one of the centres for Islamic Studies, he immediately submitted an application. It is not surprising that he was selected. Academics and theologians who have his qualifications and can also teach in German are a rare breed. After all, how could it be otherwise? The discipline has to train its academic personnel itself. Until then, the University of Tübingen will – like the other universities – bridge the gap with guest professors. 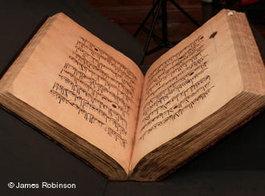 Working for an open-minded Islam: Omar Hamdan aims to make the sources of Islamic theology accessible to Muslims

​​A total of 36 students have enrolled for the course in Tübingen; the majority of them are women. Graduates of the Bachelor's degree course will also be able to work as imams. Hamdan places considerable emphasis on the word "also". Graduates will not receive certificates stating that they have successfully completed an imam training course.

Nevertheless, a number of corresponding seminars are being planned. An imam in Germany has to be capable of more than just talking about the Middle Ages or Muslim countries, he explains, they must above all address issues that relate to life in Germany. This, he adds, also involves everyday life in schools. An imam, says Hamdan, must find a path between tradition and the modern age.

A lot of catching up to do

There is a lot of catching up to do: so far, most of the 2,000 imams in Germany speak hardly any German and know little about the country in which they are supposed to be working. The majority of them are sent to Germany by the Turkish state as "imported imams" and are recalled after four years.

Hamdan's graduates will also be able to work as religion teachers. Islam as a school subject is currently at the drawing board stage in Germany. Although there are about 750,000 Muslim pupils in German schools, only some of them can attend Islamic religion classes as part of model test projects.

Such test projects are currently being run at about 20 primary schools and a handful of secondary schools in the state of Baden-Württemberg. Should the subject be introduced in all federal states, the Federal Ministry of Education and Research estimates that about 2,000 teachers will be needed to cope with demand.

Omar Hamdan was somewhat taken aback by the political nature of building up Islamic theology in Germany. Because Islam is not a single Church, the universities rely on co-operation with the various Islamic associations, which are linked to the degree courses by means of advisory councils. However, the associations often have very orthodox views. Some academics fear that they may interfere, behaviour that would not be compatible with freedom in teaching. 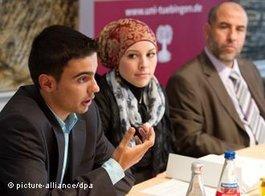 ​​In Tübingen, on the other hand, explains Hamdan, the advisory council only has a say on faith-related matters, not on the actual course content. In his personal experience, he adds, cooperation has so far been unproblematic. He then rolls up his sleeves, which he rolled down at the start of our conversation, and says: "anyway, I am a theologian, not a politician."

Hamdan would like to teach a version of Islam that is rooted in a European context. That being said, he also wants to make the sources of Islamic theology, such as the Koran, accessible. This is important to him because he feels that many Muslims have incorrect ideas about the fundamental principles of Islam. He uses an image from the modern world to illustrate his point: a person who has no knowledge of the sources is like someone who has no Internet access: they are cut off.

I ask Hamdan what he considers to be the essence of Islam. His answer, which comes swiftly, is very open: "A way of life that opens up a very broad horizon."

It is almost 5 p.m. The professor points to his smartphone, which alerts him to prayer times. He would like to end the conversation at this point so that he can do his duty as a devout Muslim, before going home to his family, to his wife and three sons.

That leaves time for just one more question. Could the version of Islam that is developing in Germany also one day have an effect on Islamic countries? Hamdan says that he does not want to look that far into the future. His priority, he says, is what is happening right outside his front door. "Muslims here want to participate in the society in which they live," he says. For them, it is about equality; about the feeling of being at home here. "A Centre of Islamic Theology is a major step forward in this respect."

Germany's foreign policy is explicitly values-based. But what happens, Ralf Bosen asks, when democracy, the rule of law and human rights collide with the logic of trade and ... END_OF_DOCUMENT_TOKEN_TO_BE_REPLACED

No other Western poet was arguably so well-versed in the Koran or so fascinated by Islam as Germany's national hero, Goethe. In a new publication that examines all Goethe's ... END_OF_DOCUMENT_TOKEN_TO_BE_REPLACED

A deluge of books, movies, series and cover stories: ever since the events of 9/11, the West has seemed almost manically preoccupied with Islam. Yet this has rarely led to deeper ... END_OF_DOCUMENT_TOKEN_TO_BE_REPLACED

Twenty years after 9/11, the world is faced with the dual challenge of Islamophobia and anti-Westernism. Ahmet Kuru argues that Muslims in the West, well versed in both Western ... END_OF_DOCUMENT_TOKEN_TO_BE_REPLACED

Two decades after the attacks of 11 September 2001, the West faces the shattered debris of its failure – not only in Afghanistan, but also in Iraq, Syria, Libya and Yemen. What ... END_OF_DOCUMENT_TOKEN_TO_BE_REPLACED

Twenty years after 9/11, the United States is recalibrating its war policy. However, its assertions that the era of endless wars is over are a myth, writes Maha Hilal END_OF_DOCUMENT_TOKEN_TO_BE_REPLACED
Author:
Arnfrid Schenk
Date:
Mail:
Send via mail

END_OF_DOCUMENT_TOKEN_TO_BE_REPLACED
Social media
and networks
Subscribe to our
newsletter