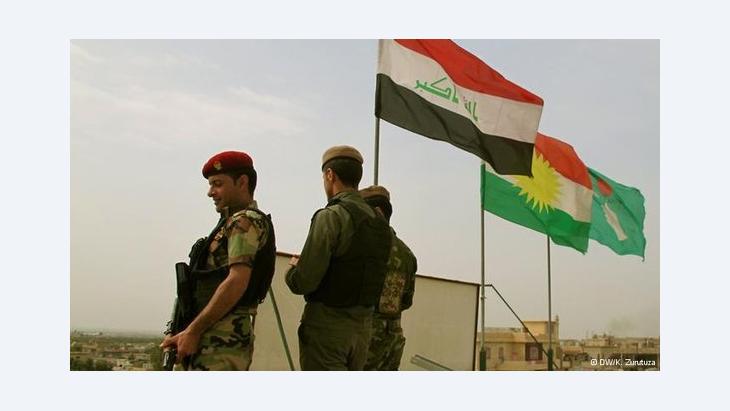 ﻿Claimed by Kurds, Arabs and Turkmen alike, the oil-rich province of Kirkuk remains one of Iraq's most disputed and politically flammable regions ten years after Saddam Hussein was toppled. Karlos Zurutuza spoke to the most senior representatives of the region's different communities about the province's diverse problems

﻿Falah Salah was only a boy when he saw oil flowing through the back yard of his family's home in Kirkuk: "One day we got up and there was a pool of black mud at the entrance. My father told us not to tell anyone about it," he recalls. The family's discretion was understandable. "If the government had found out about the oil, we would have been evicted and forced to move to another neighborhood," explains Salah, now 38.

The Salahs' story is just one of many like it in the region. Thousands of Kirkuk families were displaced because of the wealth buried beneath their feet. That is the price to pay for living on one of the largest oil reserves in the Middle East. "10,000 dinars and land to build a house in Kirkuk." That was the offer Saddam Hussein made to thousands of Arab families from the south of the country back in the 1970s and 80s. This policy of Arabisation resulted in the uprooting of local Kurds and Turkmen.

To this day, Kirkuk is still stranded in a legal limbo between Baghdad and Erbil, the capital of the autonomous Kurdish Region in north-east Iraq. A referendum, which was originally scheduled for November 2007, was supposed to decide whether Kirkuk would be integrated into the Kurdish north or would stay under the control of Baghdad. However, before the vote can take place, the controversial Article 140 of the Iraqi constitution states that steps have to be taken to counterbalance the Arabisation measures implemented by Saddam Hussein.

While deadlines to meet these obligations have repeatedly come and gone, positions on all sides have become more and more entrenched with every passing year. Kurdish troops are deployed in the north of Kirkuk, while Baghdad has stationed a military contingent of exclusively Shia Arabs in the south of the city.

"We have no choice; Baghdad is not sticking to the constitutional agreements," says Khaled Shwani, an MP with the Kurdish Alliance, a coalition of the country's most important Kurdish parties. Arab families are being given US$20,000 to move back to their native regions but they are still here," he adds. He also accuses Baghdad of "deliberately delaying" the constitutional requirement of addressing the demographic issues in Kirkuk.

The Kurdish MP can hardly hide his dismay about the complex status quo. "Kirkuk is the black well in which Iraq finds its reflection. There is not one political agreement, no dialogue and no trust between the different communities." 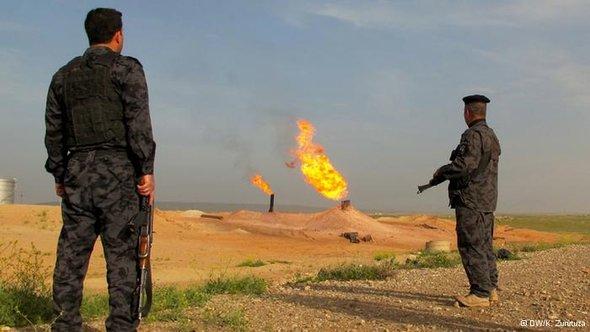 Volatile in every sense of the word: not only does the province of Kirkuk have immense oil reserves, it is also a politically explosive region: its Kurdish population would like to see it incorporated into the Kurdish autonomous region, while most Arab and Turkmen residents would like it to continue being ruled from Baghdad

The ongoing conflict in the region about which Baghdad and Erbil are fghting is also fuelled by the anti-government demonstrations in Anbar, Nineveh and Salahadin, three predominantly Sunni regions in the west of the country. Demonstrations in Kirkuk are much more modest due to its heterogeneous population. Nevertheless, in one bloody incident on 9 March, the local coordinator of the protests, Bunyan al Ubeidy, was gunned down outside his home .

"He is our first martyr in this new phase of uprisings," says Ahmed al Ubeidy, who is a member of the same tribe as Bunyan al Ubeidy, a political activist and the spokesperson of the biggest Arab alliance in Kirkuk province. Ubeidy rejects all sectarian groupings and attaches great importance to the participation of both Sunni and Shia Arabs. When asked what would be the most desirable solution for Kirkuk, Ubeidy points to the Sudanese district of Abyei, a demilitarised zone between Sudan and South Sudan that has a special status.

"We have already forwarded this proposal to the UNAMI (UN Assistance Mission for Iraq). We are calling for a buffer region between Erbil and Baghdad governed by representation quotas: 30.2 percent each for Arabs, Kurds and Turkmen and 0.4 percent for Christians," explains Ubeidy. "Article 140 expired in 2007; we now need new proposals," he adds.

As far as he is concerned, the deployment of both Kurdish soldiers and Arab troops in the region is "illegal". "Iraqi Prime Minister Nouri al-Maliki has deployed that military contingent in the region under the pretext of ensuring our safety, but his sole purpose is to protect his regime in case the crisis deepens," he says.

Hundreds of turquoise flags on lampposts and balconies challenge the hegemonic grey to remind people that the Turkmens are in the majority in the Tarik Baghdad neighborhood, a district in southwest Kirkuk. Kirkuk is home to tens of thousands of descendants of the former Ottoman merchants who are scattered along what used to be the Silk Road. According to the last census, which was conducted by the British in 1957, Turkmens number around half a million, the largest ethnic group in Kirkuk after the Kurds. 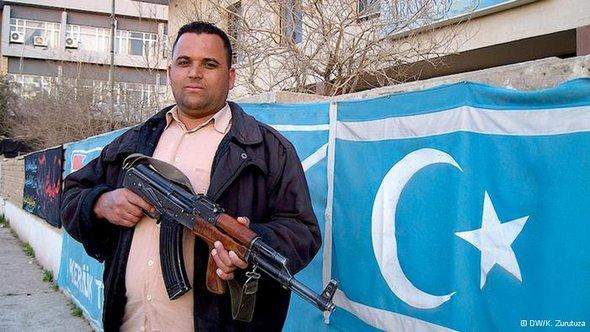 Defending the flag of Iraqi Turkmen: prior to the discovery of oil, the city of Kirkuk was predominantly Turkmen; once exploitation of the oil fields began and with Saddam Hussein's policy of Arabisation, all that changed: the region is now inhabited by roughly equal amounts of Kurds, Arabs and Turkmen as well as a Christian minority

Arshad al Salihi is chairman of the Iraqi Turkmen Front, the main political party of the Iraqi Turkmen, and also a member of parliament in Baghdad. "The Turkmen have suffered both Saddam's Arabisation campaigns and at the hands of the Kurds. The inhabitants of Kirkuk have always been Turkmen; the Kurds came to the city from the surrounding villages," says Salehi.

"Kirkuk, Baghdad, Ramadi ... these districts should work as small federal entities within a decentralized Iraq. It is the only formula that fits the complex diversity of the country," he explains . Nonetheless, Salihi acknowledges that certain Turkmen areas would prefer to be integrated into the Kurdish Autonomous Region. Their conditions for doing so, however, are clear. "There must be Turkmens in high-ranking positions; Turkmen culture and language must receive support; and we must get back the areas the Kurds stole from us."

Return to the Garden of Eden

Were one to ask them, Christians in Iraq would in all likelihood say that they suffered most over the past decade in Iraq. Imad Yokhana Yago, a member of parliament in Baghdad for the Assyrian Democratic Movement, speaks bitterly of "genocide at the hands of Islamists" and the "continuous mass flight" of his people since 2003. But when asked about his solution for Kirkuk, his tone becomes more conciliatory: "I see no need to place obstacles between us. We can live together, as we have done for centuries," he says.

But even Yago dares to dream of an exclusive project for his dwindling community. After the brutal suicide attack that killed over 50 Christians in Baghdad in October 2010, many Christians called for an autonomous region in the plains of the neighboring region of Nineveh. According to the Bible, it is in this region that the Garden of Eden once stood; today, it is yet another area over which Kurds and Arabs are fighting.

Many Eastern Christians believe that the region would become a "ghetto" for their people; Yago does not agree. "A autonomous Christian region would protect us and serve as a buffer zone between Kurds and Arabs," he says. "We are afraid; not just us Christians, all Iraqis are afraid."

Home
Print
Newsletter
More on this topic
Marching against al-Maliki: Has the Arab Spring Arrived in Iraq?Series of Terrorist Attacks in Iraq: A Culture of ViolenceInterview with Kifah Al-Jawahiri: ''Iraq's Political Crisis Is Massive''Iraq on the Eve of American Withdrawal: Discord in Kirkuk
Related Topics
Christians in the Islamic world, Iraq War, Kurds, Sunni-Shia tension
All Topics

The Kurds are under attack from two sides: from Turkey, and from Iran. The situation in their territories in northern Iraq is becoming increasingly desperate. Birgit Svensson ... END_OF_DOCUMENT_TOKEN_TO_BE_REPLACED

Hundreds of porters, locally known as ‘kolbars’, cross the mountainous border between Iran and Iraqi Kurdistan all year round. With Iran’s economic crisis deepening, ever more ... END_OF_DOCUMENT_TOKEN_TO_BE_REPLACED

The Syrian conflict remains insoluble for the time being. Yet Europe could start managing it better. By reorganising humanitarian aid supplies, becoming more involved in the ... END_OF_DOCUMENT_TOKEN_TO_BE_REPLACED

Bachtyar Ali sends the hero of his latest novel – "Mein Onkel den der Wind mitnahm" – literally flying. Jamshid is so thin after his years as a political prisoner that a gust of ... END_OF_DOCUMENT_TOKEN_TO_BE_REPLACED

In this essay, renowned Lebanese journalist and writer Hazem Saghieh asks whether the Arab Levant, which stretches from Iraq in the east to Egypt in the west, will remain an ... END_OF_DOCUMENT_TOKEN_TO_BE_REPLACED

END_OF_DOCUMENT_TOKEN_TO_BE_REPLACED
Social media
and networks
Subscribe to our
newsletter