Skip to main content
On Salman Rushdie, a Bridge-builder who Polarises

The Return of the Burning Effigies

The announcement that Salman Rushdie is to be awarded a knighthood has caused diplomatic and public outrage in Muslim countries. But these rituals do not necessarily have anything to do with the reality of the situation, says Angela Schader 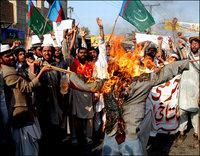 A very severe form of literary criticism: enraged Muslims in Pakistan protest against Salman Rushdie's Knighthood and his Satanic Verses

​​Here we go again: people in Pakistan and other Islamic countries are protesting at the decision to award a knighthood to Salman Rushdie. One can safely assume that not all of those who have taken to the streets to voice their anger have the privilege of being able to buy and read books, to formulate their opinions on the basis of balanced reports, and to understand the increasingly complex hierarchies and relationships within the 'global village'.

Meanwhile in Great Britain, the members of the committee responsible for nominating the writer scratch their heads in disbelief and let it be known that they did not expect such a furore.

Once again, intellectuals in the West are rushing to the defence of the freedom of expression, art, and society while the impotent rage of the people in the East (which those in power there like to manipulate to their own ends) is vented in the burning of effigies and the shouting of vitriolic slogans.

Whatever the considerations were that led the committee to recommend Salman Rushdie for a knighthood, it is highly unlikely that it was meant as an explicit affront to Islam – an accusation being levelled at the British government by some Muslim representatives both in Britain and elsewhere.

A country that has already been hit (from within) by the scourge of Islamic terrorism and has to walk the precarious tightrope between monitoring Muslims more closely while simultaneously integrating them in a convincing manner can ill afford to indulge in such unnecessary provocations.

It is more likely that in honouring the author in this way, Britain is trying to pour oil on the troubled water of what is a strained relationship. When Rushdie moved from London to New York in 2000, both the author and the British media said and wrote some very bitter things. People resented Rushdie's glittering social life in the USA, pointed to the vast amounts of money spent by the British government over the years in order to protect the author, and expressed anger at his lack of gratitude.

For his part, Rushdie was irritated by both this practice of weighing up what had been given and what had been received in return and the expectations that were being voiced. It is conceivable that the awarding of the knighthood is an attempt to bring an author, whose work broke new ground for Commonwealth literature, back into the British literary fold.

After all, Salman Rushdie is considered to be Islam's most wanted enemy and Great Britain to be the country which not only stood unconditionally alongside the USA in the "war on terror", but also took the fateful decision to march into Iraq.

One could say that in a reversal of the "axis of evil" principle, yet another poisoned morsel is being served up to the Muslim world on a silver platter, a morsel that merely serves to feed anti-Western sentiment.

Almost 20 years have passed since the publication of The Satanic Verses. Salman Rushdie conceived his novel as the "story of two painfully torn egos". While the first protagonist is torn between East and West, between Bombay and London, the other plunges into spiritual homelessness, "suspended in the air between his immense need to believe and his inability to do so".

The torture of a crisis of faith is dealt with in a subtle and deeply serious way. On the level of the narrative, however, Rushdie employs travesty, which could easily be interpreted as blasphemy by readers not familiar with this kind of writing, and even more so by those devout Muslims who know nothing of the book but what they read in brief, distorted descriptions. But this was not the readership Rushdie had in mind when he wrote his rich and complex novel.

Ironically, his focus was more on the western readership of The Satanic Verses, whom he confronted with questions that our secular society felt had long since been answered and that only arose again and became the subject of public debate when Muslims began protesting against the novel.

Would it be absurd to see some of the inner conflict that plagued Rushdie's two protagonists in the suicide bombers Mohammed Atta and Shahzad Tanweer – two young men in leisure suits and street gear who harboured in their hearts a deep hatred of "the West"? In The Satanic Verses, Rushdie focussed at an astonishingly early stage on these inner conflicts and tensions, which some people use in an attempt to explain such opaque psychograms. It is a pity that he did not continue on this level.

In 1995, the Iranian politician Muhammad Jawad Larijani had the following to say about Salman Rushdie: "I envy a man with such literary abilities. I wish he would use this powerful energy to build bridges between the cultures instead of destroying them." Rushdie undoubtedly saw himself as a bridge-builder too. His volume of stories entitled East, West (1994) bears witness to this in a most literary and eloquent manner.

Nowadays, of course, words like "dialogue" and "bridge-building" are used so often (and to little effect) with regard to the relations between the Islamic and Western worlds that one almost feels some embarrassment about the ideals for which they stand.

Meanwhile, other, more clandestine bridge-builders continue to weave the loose web that connects militant Islamic cells around the world. For this reason, Britain will be looking forward with some trepidation to the day when its headstrong, prodigal son returns to the fold to receive his knighthood.

This article was previously published in the Swiss daily Neue Zürcher Zeitung.

Escalating Conflict about Prophet Caricatures
Bomb in Turban
After the publication of the provocative Mohammed caricatures in a Danish newspaper the question has been raised about whether certain rights such as the freedom of speech and the press should really remain unrestricted or whether they – like every other freedom – should find their limits where the freedom of the other is affected. By Peter Philipp

Benedict XVI's Statement on Islam and Reason
The Mistakes of the Pope and the Mistakes of the Muslims
Both Pope Benedikt XVI and the Muslims made some mistakes in their recent skirmish. But now it's time to forgive and forget, since Christians and Muslims have much more important challenges ahead, writes media scholar Khaled Hroub

END_OF_DOCUMENT_TOKEN_TO_BE_REPLACED
Social media
and networks
Subscribe to our
newsletter