Skip to main content
On the Death of Hossein Ali Montazeri

From Revolutionary to Reformer

Grand Ayatollah Montazeri was regarded as the spiritual authority behind the "green movement" in Iran. And yet the erstwhile friend of Khomeini once played a major role as architect of the Islamic Republic. His metamorphosis from revolutionary to reformer is exemplary for the evolution of Iran's opposition. By Urs Sartowicz 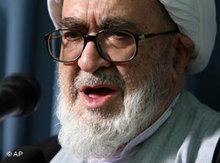 Major loss for Iran's opposition movement: The most outspoken of the dissident clerics, Grand Ayatollah Hossein Ali Montazeri, died this weekend at 87 in Qom

​​When Ayatollah Hossein Ali Montazeri was chosen as designated successor to revolutionary leader Ayatollah Ruhollah Khomeini in November 1985, no one could have dreamed that he would one day become one of the most prominent advocates for government reform in Iran.

Among Khomeini's most loyal supporters and closest confidants since the 1960s, the cleric was thought to be a resolute advocate of exporting the Islamic revolution to other countries and one of the most prominent endorsers of the principle of velayat-e faqih, or "Governance by the Islamic Jurists", which he had helped to anchor in the constitution as chairman of the Assembly of Experts after the 1979 revolution.

Montazeri was already part of Khomeini's inner circle back in 1963, when demonstrations were held against the Shah's policies. After Khomeini was arrested, it was Montazeri who hindered his impending execution by organising the clergy's protests.

Khomeini showed his gratitude by appointing Montazeri as his representative in Iran during his time in exile. During the revolution Montazeri played a less exalted role than other clerics, but after 1979 he was the only one who was considered a suitable successor to Khomeini, as he was the only high-ranking cleric to support the idea of velayat-e faqih.

Ashamed of the violations of the people's rights 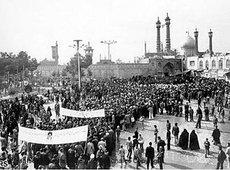 Montazeri had been one of Khomeini's closest associates since the 1960s, turning against the Shah and advocating the export of the Islamic Revolution to other countries

​​Montazeri later took a critical view of his role at that time, even though he claimed that he had already pushed for democratic elections and supervision of the leader back then:

"Everyone knows that I have been a staunch supporter of religious rule and that I believe in 'Governance by the Islamic Jurists' – although not in its current form but in a way that would enable the people to elect the jurist and monitor his work – and that I have devoted myself to the realisation of this goal, but now I feel a sense of shame when I remember the injustices done to the people in the name of this principle and feel responsible to God for the blood that was shed and the violations of the people's rights."

This sense of shame presumably stems as well from Montazeri's failure to speak up in the years following the revolution. Unlike other clerics, he reserved judgement during this period on the excessive violence and the persecution of actual or alleged opponents of the revolution, nor did he voice any protest at the restriction of civil rights in that era.

Although Montazeri, who himself had experienced years of imprisonment, torture and exile under the Shah, dedicated himself to improving prison conditions starting in 1984, he only began in 1987 to openly call for more far-reaching reforms.

One reason for his increasingly critical stance was the affair surrounding his close associate Mehdi Hashemi. The latter had made public the negotiations carried out in May 1986 by the parliamentary speaker Ali Akbar Hashemi-Rafsanjani with the USA. At the instigation of Rafsanjani – and despite Montazeri's protests – Hashemi and 14 of his colleagues were executed in September 1987 for their role in the affair.

Tensions with Khomeini mounted as a consequence, until finally in August 1988 Montazeri felt compelled to break with the man who was once his spiritual father and role model, sharply censuring Khomeini’s orders to execute all imprisoned members of the opposition as a violation of both the law and religion.

Today, Montazeri's credibility is based not least on the fact that he was the only one who dared to object to the executions back then. The former Minister of Culture Ataollah Mohajerani for example writes today: 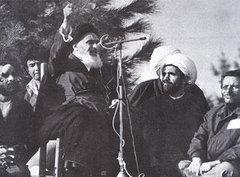 As a friend of Khomeini, Montazeri was an architect of the Islamic Republic. Later he broke with the revolutionary leader, viewing Khomeini's executions of opposition members as a violation of the law and religion

​​"We all held our tongues back then as we watched our young people being massacred, because we believed that the war justified our silence and permitted these murders, which took place at a rate unprecedented in our history. Of all the officials, only one voice was raised: that of Ayatollah Montazeri, who opposed the murders and was relieved of his post as a result. The value of his deed outweighed the value of any office he could have lost."

Directly precipitating Montazeri's fall was a series of speeches, interviews and articles on the tenth anniversary of the revolution in February 1989 in which he took a deeply critical view of the events of those days.

He not only demanded that political parties be permitted, corruption fought and an end put to the persecution of the opposition; he also accused the government of having betrayed its own goals and values, and criticised the continuation of the war against Iraq as unnecessary and unjustified – a direct attack on Khomeini.

When shortly thereafter two letters he had written to Khomeini in August 1988 were publicised by the BBC, Khomeini had had enough.

In March 1989 he dismissed Montazeri, whom he had once called the 'fruit of my life', as his successor in the office of revolutionary leader. When Khomeini died a few months later, in June 1989, Ali Khamenei was elected Supreme Leader.

Mentor of the reform movement

For Montazeri this meant a complete loss of power, and yet in the ensuing years he became the veritable spiritual authority of the reform movement, contributing to its legitimacy with both the religious esteem he still enjoyed and with his recognised personal integrity.

Although he was often mocked and not taken seriously as a politician due to his simple background and peasant vernacular, people admired his humility and advocacy of the rights of the imprisoned and persecuted, no matter the personal consequences.

Montazeri posed a challenge for Khamenei, himself a merely mediocre scholar who was elevated to the status of ayatollah overnight just before his election, and who therefore in the eyes of many clerics did not have the necessary qualifications for the office of revolutionary leader. 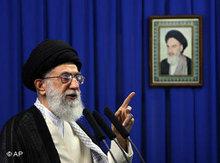 ​​Khamenei hence took pains from the very start to cement his religious authority. But when his followers campaigned to recognise Khamenei as a Grand Ayatollah in November 1994, Montazeri and other members of the clergy refused to accept this intervention by the state, which would be tantamount to subjugating religion to the dictates of politics.

According to Montazeri, the revolutionary leader as spiritual authority should ensure that politics conforms to Islam but not himself exercise power.

As Montazeri lamented in a much-noted November 1997 speech following the election of Mohammad Khatami as President of Iran, the entire responsibility for government now lie with the President, while the power was in the hands of the revolutionary leader.

The latter had surrounded himself with a royal court like that of a king and had alienated himself from the people. The regime reacted at the time by closing Montazeri's seminary and putting him under house arrest, which was not suspended until early 2003.

The situation in Iran has changed fundamentally since 1997. Redistributing power in favour of the President, which made sense as long as this office was held by a reformer, obviously no longer offers a solution since the election of hardliner Mahmoud Ahmadinejad. 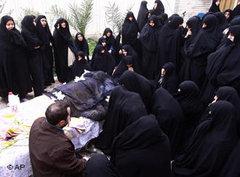 Loss of one of Iran's most acclaimed and controversial clerics: mourners bid farewell to Hossein Ali Montazeri in Qom

​​In days when it seems as though, as Montazeri wrote, "the state is in fact under the rule of the military and not the rule of the jurists", the debate on the power and legitimacy of the revolutionary leader now takes second stage. With the controversial elections in June 2009, Montazeri seemed to have lost all hope of ever reforming the system.

In his declaration on the legitimacy of the regime on 11 July 2009, recognised widely both in Iran and abroad, he explained that there was no sense in retaining a regime that had lost any sort of Islamic or democratic legitimacy and operated based solely on violence and deception, and that it was the duty of all believers, first and foremost the clergy, to contribute to its overthrow.

Despite these words of unparalleled harshness, the regime – unlike its reaction in 1997 – sufficed with blocking Montazeri's website. They were not prepared to risk having the 87-year-old die under house arrest and thus become a martyr.

Grand Ayatollah Montazeri
"The System Has No Religious Merit"
Grand Ayatollah Montazeri was once designated to step into Khomeini's shoes as supreme leader, but shortly before the latter's death he was demoted for his criticism of the regime. Today he is one of the system's most outspoken critics and reform advocates. On 11 July he issued a declaration denying the regime's legitimacy. Urs Sartowicz has the details

Interview with Amir Sheikhzadegan
A School for Democracy in Iran
Amir Sheikhzadegan is of the opinion that the supporters of Karroubi and Mousavi have learned from the earlier experiences of the reform movement under former president Khatami and have made a conscious decision to demonstrate peacefully and voice realistic political demands. Alessandro Topa spoke to the Iranian sociologist

END_OF_DOCUMENT_TOKEN_TO_BE_REPLACED
Social media
and networks
Subscribe to our
newsletter