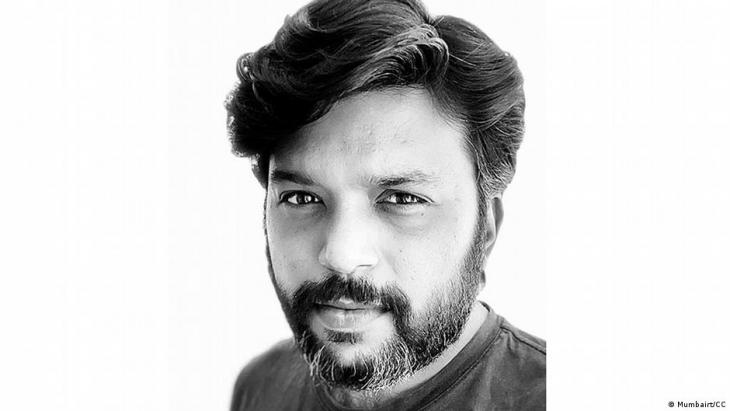 In India and beyond, there has been great sadness at the loss of the renowned Reuters photographer Danish Siddiqui, whose images captured the human face of South Asian news. He died while on assignment in Afghanistan. By Natalie Mayroth

Can photos change our view of the world? They can be deceptive, but pictures can also bring us closer to a truth that is often bitter. The images captured by Indian photojournalist Danish Siddiqui covered more than just the major crises of recent years in South Asia, from Bangladesh to Sri Lanka. He treated people with respect, always ensuring their dignity was preserved. But he did not return from his last assignment. He was killed while reporting on the situation in Afghanistan, where international troops are being withdrawn and the Taliban is on the advance.

Siddiqui was accompanying a special unit of the Afghan army on 16 July when he died in a clash with the Taliban in the south-eastern province of Kandahar. A high-ranking Afghan officer also lost his life. Prior to the fatal attack, Siddiqui had received a shrapnel injury to his arm, but he was on the road to recovery. Until his death, Siddiqui was the head of the multimedia team at the India branch of the Reuters news agency.

Numerous politicians from around the world have paid tribute to the photographer: from UN Secretary General Antonio Guterres to the Afghan head of state Ashraf Ghani and representatives of the U.S. government, as well as many Indian politicians, among them Mamata Banerjee (chief minister of West Bengal), the opposition politician Rahul Gandhi from the Congress Party, and Arvind Kejriwal (chief minister of the Union Territory of Delhi).

In India, people held mourning vigils from Kashmir in the north to Mumbai in the west, from Kolkata in the east to Trivandrum in the south, and in his hometown of New Delhi.

The data specialist Karen Hao met Siddiqui in Mumbai in 2020, and recalls his modesty and his warmth: “He told me about this incredible love story with his wife, his charming children and his desire to go on doing good work.” When they met, shortly before the outbreak of COVID-19, he was preparing for his next foreign assignment. “I told him he was incredibly brave. He said it was really his wife and children who were the brave ones. They kept having to say goodbye to him when left for his next life-threatening job.” 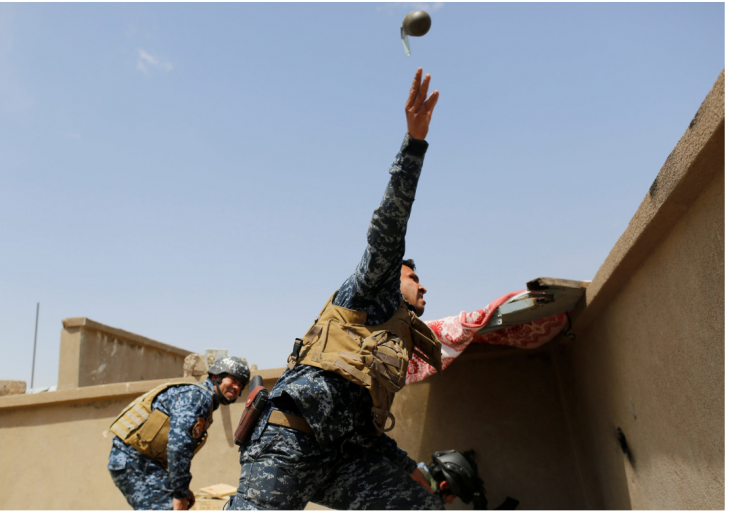 Danish Siddiqui travelled to many crisis areas. In his work as a photographer, he always tried to show the human face of breaking news. Here an image of his depicts the liberation of Mosul by Iraqi forces from Islamic State in 2016

The photographer’s extraordinary work for the Reuters news agency includes images from Nepal, Iraq, North Korea and Hong Kong. In 2015, he captured the aftermath of the devastating earthquake in Nepal, in which almost 9000 people died in South Asia.

His pictures of the battle for Mosul in Iraq from the year 2016, when Iraqi forces liberated the city from the hands of the so-called Islamic State, are also particularly powerful.

Elsewhere, Siddiqi documented the important Hindu festival of Kumbh Mela before the Indian parliamentary elections in 2019, and the fate of Rohingya Muslims forced to flee from Myanmar to Bangladesh (2017).

In 2019, there followed a visit to North Korea, where he captured the leader cult around Kim Jong II.

There were also heated Indian elections, protests against the controversial new Indian citizenship law (the Citizenship Amendment Act, passed in December 2019), the lengthy protests by Indian farmers against the new agricultural laws, and the long journeys faced by migrant workers following the announcement of India’s first strict coronavirus lockdown in the spring of 2020, when public transport was shut down. Siddiqui’s photo of a migrant worker carrying his son on his shoulders became an iconic image for the long treks that poor people made to their villages.

After that, Siddiqui’s photos showed the helping hands during the pandemic, but he also produced shocking images showing the severity of the pandemic in India, as the second wave brought the health system to the point of collapse. More than 4,000 deaths per day (according to official figures) resulted in over-filled crematoria like those in Delhi in April 2021.

Siddiqui also documented the growing inter-religious tensions between Hindus and Muslims in India, which came to a violent head in northeast New Delhi in February 2020 during a visit by the former US president Donald Trump. These clashes left 53 people dead, and numerous houses occupied by Muslims were destroyed. 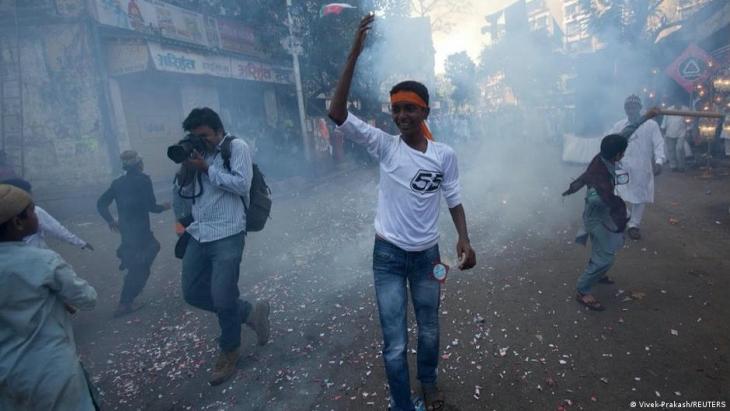 Siddiqui will be particularly missed in India: in January 2020, during student protests in New Delhi against the controversial citizenship law, he photographed a Hindu nationalist aiming a pistol at demonstrators in front of Jamia University and injuring a man's hand. The photo of the "Jamia shooter" caused a furore in India. It is these clear-eyed observations for which Siddiqui was admired by many. "Danish and his camera were the relentless moral and ethical compass of Indian journalism and Indians alike," says journalist Rana Ayyub.

And in January 2020, at the student protests in New Delhi against the controversial citizenship law that excluded Muslims from a simplified path to citizenship, it was also Siddiqui who photographed a Hindu nationalist aiming a pistol at demonstrators outside Jamia University and injuring a man’s hand.

The photo of the “Jamia shooter” caused a furore in India, as did the image of a Muslim man being brutally beaten during the unrest in northeast Delhi.

It is these clear-eyed observations for which Siddiqui was admired by many. But others accused him of damaging India’s reputation with his pictures.

"Danish and his camera were the unerring moral and ethical compass of Indian journalism and Indians alike," writes his friend, the journalist Rana Ayyub. She complains that the Indian Prime Minister Narendra Modi has remained silent following the death of the photojournalist, while the rest of the world is outraged and grieving.

The long path to photojournalism

Siddiqui grew up in the Muslim-majority district of Jamia Nagar in New Delhi, India’s capital city. His father, Mohammad Akhtar Siddiqui, taught at the elite university Jamia Millia Islamia, where his son completed an undergraduate degree in economics, and then a Master’s in mass communications in 2007. Afterwards, he initially worked as a TV journalist. It was only later that he made the switch to photojournalism. A friend, the political advisor Bilal Zaidi, says he was a man of few words. He was much better suited to working behind the camera than appearing in front of it.

Siddiqui started from the bottom again in 2010, as an intern at the news agency Reuters. The following year, he moved to western India. These were formative years, in which he quickly developed a network that stretched beyond the city’s photographers. “Within months of his arrival in Mumbai, Danish knew almost every human rights activist who lived in the city,” says Rana Ayyub. In Mumbai, he spent a lot of time in Mohammed Ali Road in the south, and the Bandstand Promenade in the Bandra district.

The assignment that really made his name was the story of the child star Rubina Ali, from the film “Slumdog Millionaire”. The film has a happy ending, but in real life, the Ali family’s shack burned down in one of Mumbai’s slums. Siddiqui’s shots of the slum and its residents make you reflect on humanity. This empathy for people in all walks of life is revealed in many of his photographs. It was one of the reasons his team won the 2018 Pulitzer Prize for feature photography, with their images of Rohingya refugees in Bangladesh – a prize he dedicated to his children. In 2019, Danish Siddiqui was finally made head photographer for Reuters, and moved back to Delhi. 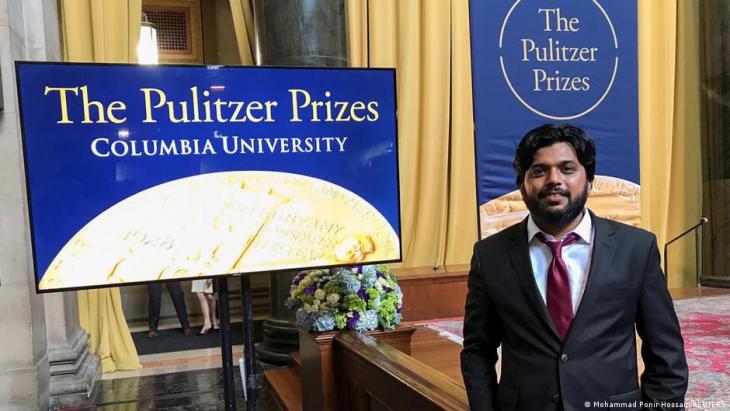 Empathy for people in all walks of life characterised much of Siddiqui's work. It was one of the reasons his team won the 2018 Pulitzer Prize for feature photography, with their images of Rohingya refugees in Bangladesh – a prize he dedicated to his children

The coronavirus pandemic has seen many deaths among both journalists and photographers in India. The Network of Women in Media, India (NWMI) counts more than 500 victims among them.  Siddiqui’s death, meanwhile, shows just how dangerous the situation in Afghanistan is for media representatives. According to information from Reporters Without Borders, 17 foreign journalists have been killed in Afghanistan since 2001, including Siddiqui’s colleagues Harry Burton and Azizullah Haidari.

The death toll is especially high among Afghan journalists. At least eight have been killed in the past year alone. Experts on Afghanistan like Emran Feroz warn that media representatives are literally being hunted down. And while investigations are announced after these attacks, they never really get off the ground. Members of the media are under threat from numerous groups: criminal networks, the terrorist organisation Islamic State (IS), but also the Taliban, who disapprove of independent media. Who is responsible for Siddiqui’s death? The Taliban are suspected of it, but they have denied being behind the murder and expressed their regret.

Siddiqui was really needed more in India than in Afghanistan, we hear from people who knew him. The past year has been a challenging one for India’s democracy. “I’ve lost my eyes, son. You showed the truth!” says the embodiment of “Mother India” in a drawing by cartoonist Satish Acharya on Siddiqui’s death.

Danish Siddiqui died doing the work he was passionate about: his aim was to capture the human face behind the news. His body has now been brought back to India and laid to rest in Delhi. Siddiqui was 38 years old. He leaves behind his wife – a German art historian – and their two children.

Home
Print
Newsletter
More on this topic
Qantara photo essay: Danish Siddiqui and the people behind the storyPress killings in Afghanistan: Afghan journalists forced to run a murderous gauntletAfghanistan’s academics under fire: Must young Afghans be willing to die for an education?Interview with the German-Afghan photographer Lela Ahmadzai: The undaunted women of Kabul
Related Topics
Ashraf Ghani, Narendra Modi, Photography, Rohingya Muslims, Taliban
All Topics

For nearly 20 years, Bagram was the headquarters of U.S. forces in Afghanistan. Since the spring, the base has been cleared. What remains is a pile of rubbish. ... END_OF_DOCUMENT_TOKEN_TO_BE_REPLACED

I regret very much that I worked for the Bundeswehr. If the Taliban knock on my door, I hope they shoot me right away. Guest article by Ahmad Jawid Sultani END_OF_DOCUMENT_TOKEN_TO_BE_REPLACED

Almost all NATO troops have withdrawn from Afghanistan. Turkey is looking to fill the gap and is offering itself as a new protective power. But the Taliban are sending clear ... END_OF_DOCUMENT_TOKEN_TO_BE_REPLACED

During their 1996-2001 rule, the Taliban outlawed dozens of activities in Afghanistan. Now, with the insurgents once more making huge territorial gains across the country ... END_OF_DOCUMENT_TOKEN_TO_BE_REPLACED

The West is pulling out of Afghanistan after 20 years, but the conflict remains – and the Taliban are stronger than they have been for a long time. And now? The renowned Taliban ... END_OF_DOCUMENT_TOKEN_TO_BE_REPLACED

United States and NATO troops are leaving Afghanistan after 20 years, despite the fact that the Taliban is still advancing. The German Bundeswehr is already out. Sandra Petersmann ... END_OF_DOCUMENT_TOKEN_TO_BE_REPLACED
Author:
Natalie Mayroth
Date:
Mail:
Send via mail

END_OF_DOCUMENT_TOKEN_TO_BE_REPLACED
Social media
and networks
Subscribe to our
newsletter