On the Death of Samuel Huntington
A Portentous Buzzword

This success is spectacular. How to account for the journalistic curiosity by which the headline of a political science essay became overnight the buzzword for an entire epoch? The recently deceased Samuel Huntington is a reception phenomenon in a class all his own. By Christian Geyer 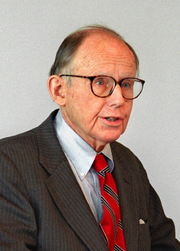 He rose to international fame with his analysis of the "Clash of Civilisations": American political scientist Samuel P. Huntington

​​ Huntington's thesis on the "clash of civilisations" has enjoyed a career that is virtually unparalleled. First published in 1993 in the magazine "Foreign Affairs", and later expanded into a best-selling book, Huntington's theory gained a weight comparable to that of Spengler's "Decline of the West" in the wake of 11 September 2001 and has henceforward been cited in practically every attempt to explain the origins of international conflict.

Whether or not one agrees with every one of Huntington's arguments, there is no ignoring the interpretation pattern imposed by the man from Harvard.

Pacemaker for the debate

Today, we can confirm that the intervening fifteen years have done Huntington's theory a world of good. They have done much to sharpen the terms of the argument – so much that in the meantime its confutation makes it shine all the more brilliantly. There is no need to go so far as to say that the thesis has negated itself.

But in his efforts to more finely differentiate and correct his theories, Huntington has played a major role in creating the present-day situation in which the ostensibly unavoidable "clash of civilisations" is feared more as a rhetorical than as an analytical weapon. Which doesn't mean that the thesis of cultural clash is any less politically explosive. As pacemaker for a debate on war and peace between civilisations, it serves quite well, irrespective of the empirical content of the individual points.

The blurriness of the cultural

​​No one would seriously attempt to deny that cultural factors play quite a substantial role in human coexistence. But the crux of the issue is rather the question of which elements of the respective cultures tend to drive conflicts and why they each unfold that effect. If one pursues this question in detail (which Huntington did not), the concept of culture as the guiding force in conflict begins to disintegrate.

Upon closer scrutiny, civilisations lose that aura of being basically stable and hence per se conflict-charged substances – the notion that prompted Huntington's considerations.

He himself was absolutely opposed to the Iraq War from the outset, and he saw an urgent need following 11 September to remove the catchy tune about the clash of civilisations from the political record stores: "Osama bin Laden's goal is namely to turn this war by a terror organisation on civilised society into a clash of civilisations between Islam and the West. It would be a disaster were he to succeed."

Play me the song about the clash of civilisations? All of a sudden, Huntington didn't want to be the lead singer anymore. He had, so it seems, simply taken a closer look at things.

The primacy of the political

Others had already done so before him. Panajotis Kondylis was one of the first to pointedly turn the thesis of cultural conflict against the culturalist appropriation of politics. In 1996 he framed in this newspaper a fundamental objection to Huntington:

"If civilisations were irreducible substances and conflicts the necessary result, then the lines of separation between the civilisations would be immovable, i.e. friendship and enmity would be eternal. And their self-image in turn would have to outlast all changes in the world outside and inside their borders. Historical experience teaches us otherwise. The attitude of one culture to the others and to itself can change either slowly or quickly whenever historical subjects change places in the constellation."

Culture is not something that is immutable or closed-ended. It continually undermines itself in order to survive.

No matter where we look, we see the primacy of political, and not of cultural, logic. Political expediencies are what for the most part produce cultural interpretation patterns. Battles for the distribution of resources may present themselves in ethnic or religious garb. But that alone is no reason to claim that Islamophobia is at core rational (while this admittedly does not affect the battle against Islamic fundamentalism).

At any rate, we can learn in every sociology introductory seminar, in every municipal parliament, in every corner bar, that conflicts are only in the rarest cases of a genuine ethnic or religious nature, and are much more likely to be socially motivated.

Man does not live by values alone, as if they were simply hanging down from a sky full of ideas, free for the choosing. On the contrary, values form an amalgam with the realities of social and political life. That is where the conflicts both come to the fore and take on their cultural trappings.

Huntington did not want to let himself be used as an ideological polariser for the West. That he was nonetheless unable to escape this role was part of the price paid for the success of his theory of the clash of civilisations.

Translated from the German by Jennifer Taylor
Qantara.de

Interview with Charles Taylor
"We Think in Factions"
"The more one feels accepted, the less susceptible one is for extremism," Canadian philosopher Charles Taylor says. Edith Kresta and Daniel Bax spoke with him about multicultural society and integration politics in Europe and Canada

END_OF_DOCUMENT_TOKEN_TO_BE_REPLACED
Social media
and networks
Subscribe to our
newsletter