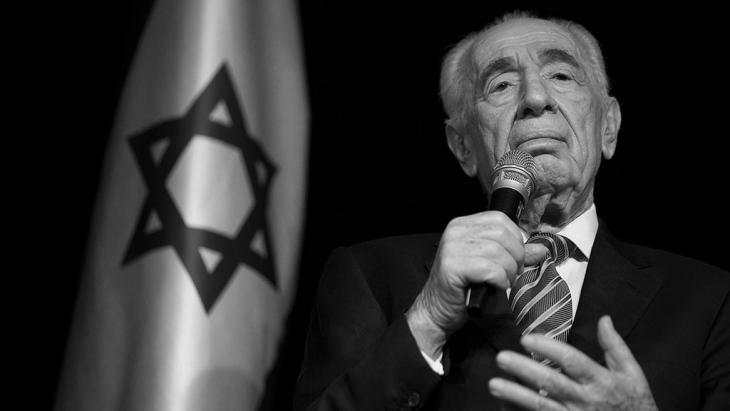 On the death of Shimon Peres

In the blanket homage to the late Israeli politician Shimon Peres there are significant omissions. One should not speak ill of the dead. But nevertheless, the gushing praise demands further clarification. A critical appraisal by Stefan Buchen

He fought "tirelessly" for "peace". He was "a man of reconciliation", an "exceptional politician". He embodied "the grace of Zionism". Governments and media are in agreement: in Shimon Peres, we have lost a "great statesman".

A quick reality check leads to the suspicion: something's not quite right here. The situation of the state of Israel cannot be described with the word "peace" – neither regarding its relationship with its neighbours, nor within its own borders. There is nothing "gracious" about the metre-high concrete wall aimed at separating Israelis from the Palestinians, the cyclical outbreaks of violence and the arsenal of nuclear weapons, not to mention the aggression of the public and private political discourse. Shimon Peres was involved in all this, in some cases playing a decisive role.

There are essentially two responses to explain the latent discrepancy between the solemn tone of the obits and reality. Firstly: perhaps the statesman Shimon Peres wasn't quite so "great". In any case he must have been much too weak and small to realise his "visions for peace". Secondly: perhaps the image of the Prince of Peace is a flimsy ideal, one that only offers a highly inadequate description of the political figure of Shimon Peres. Perhaps "reconciliation" with the neighbours was not the determinant motive of his actions at all. One must seek out the truth in a combination of both answers.

Peres had it easy in the winter of 1995/96. On 4 November 1995, a national-religious fanatic assassinated serving Prime Minister Yitzhak Rabin at a peace rally in Tel Aviv. Peres, who had also been taking part in the memorable demonstration in support of the "Oslo Accord", was shunted up from the post of foreign minister to the helm of government. 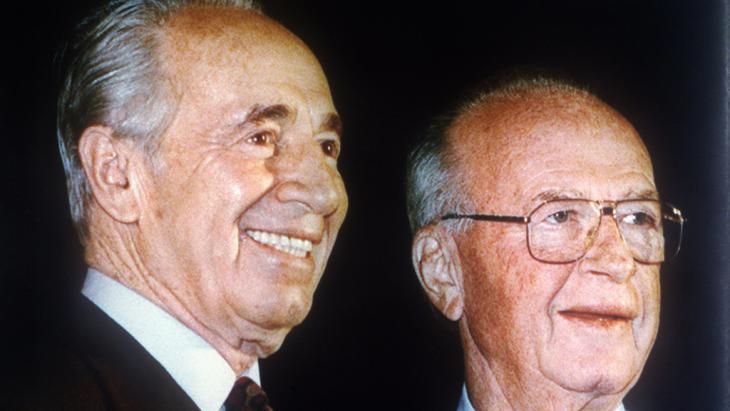 Many Israelis were shocked at the hatred that had led to the murder of Rabin. Peres could have reined in those fanatics agitating against the peace accord with the Palestinians, clipping the political wings of their spokesmen. But Peres eschewed confronting his political opponents head on

There was every indication that he would win the impending elections and be confirmed in office. He was carried on a wave of sympathy at home and all over the world. Many Israelis were shocked at the hatred that had led to the murder of Rabin. Peres could have reined in those fanatics agitating against the peace accord with the Palestinians, clipping the political wings of their spokesmen Ariel Sharon and Benjamin Netanyahu.

But Peres eschewed confronting his domestic political opponents head on. In the midst of the election campaign, he instead launched the dreadful military operation in Lebanon with the preposterously poetic name "Grapes of Wrath". Intended to weaken the Tehran-sponsored Shia Hezbollah militia, this did not happen. Instead, in one single bombardment, Israeli artillery killed more than 100 people who had sought refuge in a UN building in the southern Lebanese village of Qana.

With the campaign, Shimon Peres wanted to demonstrate his strong man credentials, national security his top priority. The result: Peres was beaten in the general election on 29 May 1996 and Netanyahu became prime minister. This defeat at the polls was one of the gravest political errors of modern times. This failure is the decisive moment in Peres' political biography.

Home
Print
Newsletter
More on this topic
Interview with Israeli historian Ilan Pappe: "This situation is not temporary, it is the future"Interview with Amos Oz: "For Israel, it is a lose-lose situation"Palestine and its Arabic neighbours: Gaza – a city no one wants
Related Topics
Benjamin Netanyahu, Fatah, Hamas, Hezbollah, History of the Near and Middle East, Holocaust, Iranian nuclear programme, Israeli-Palestinian conflict, Jassir Arafat, Shimon Peres
All Topics

While agreeing last week to a withdrawal of US combat troops from Iraq, neither Iraqi nor US leaders can admit publicly how much they need each other. By Cathrin Schaer END_OF_DOCUMENT_TOKEN_TO_BE_REPLACED

The Middle East is plagued by electronic armies working at the behest of one regime or another. Long used by those in power as a weapon in the fight against activists and ... END_OF_DOCUMENT_TOKEN_TO_BE_REPLACED

On Friday, Iranians head to the polls to elect a new president. What's at stake in this presidential election? Sanam Shantyaei explains. END_OF_DOCUMENT_TOKEN_TO_BE_REPLACED

For centuries, the great classical Persian author Hafez has inspired German writers. Translations, adaptions and homages have been created in his wake, and the process continues ... END_OF_DOCUMENT_TOKEN_TO_BE_REPLACED

END_OF_DOCUMENT_TOKEN_TO_BE_REPLACED
Social media
and networks
Subscribe to our
newsletter