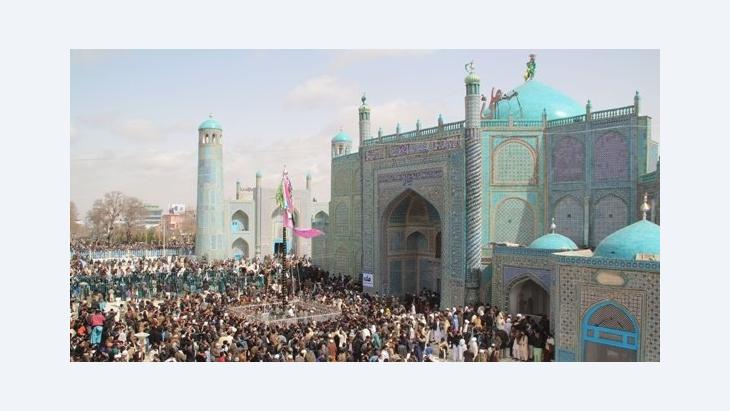 On Tour in Afghanistan, Part 2

Around the turn of the Persian calendar year, our author Marian Brehmer set off for a two-week trip through Afghanistan. In Mazar-i-Sharif and Kabul he spoke with people outside the war zones. What are their hopes for the new year, and how do they view the recent developments in their country?

For the dealers in Mazar-i-Sharif's bazaar, Nouruz has already been good for business. Crowds throng the alleyways around the Blue Mosque at year's end. Cliques of women in blue burqas form islands in a sea of bustle. Hand-in-hand they drift toward the displays of clothing and cosmetics. Boys hawk prepaid cards for mobile phones strung on long festoons.

It's midday. Fabric vender Hamidullah has already had three-dozen customers. That's more than the 35-year-old usually sees in an entire day. Hamidullah has a moustache and is wearing a leather jacket. On his head is a crocheted prayer cap. Hamidullah sells cloth: cotton and silk. Lightweight fabrics for summer and more densely woven textiles for the colder seasons. 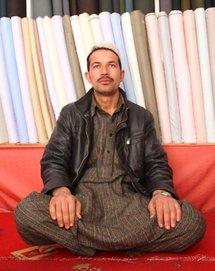 ​​"This Nouruz, white and blue are very popular," Hamidullah reports. The customers bring the fabric to a tailor to have a shirt or shalwar kameez made. A shalwar kameez, which consists of a knee-length shirt and loose-fitting pantaloons, requires four metres of fabric from the bolt.

"Nouruz is a tradition from olden times; that's what I like about it," says Hamidullah. What are his wishes for the New Year? "I don't wish for anything – that's forbidden in Islam." But everyone should decide for himself how he wants to celebrate it, he adds.

On the theme of war, Hamidullah gets more specific. If it were up to him, the foreign troops should leave Afghanistan as quickly as possible. They entered the country as invaders. "As long as the foreigners are here, nothing will change. The Afghans want to build their country alone, if Allah so wishes," says Hamidullah. Then he tries to speak some English in order to show at least that much respect to the foreign guest in his shop. Hamidullah gazes at the cloth on display and considers. He utters a sentence in which it is possible to make out the word "people". His schooldays were too long ago.

"I would like to learn English again," he says apologetically, adding that it's a good thing to be able to speak a foreign language. As a child, Hamidullah had to work as a street vender while still in school. "My children should become doctors and serve society. I will do anything I can to make that possible," he says.

Wouldn't I like to stay for lunch, he inquires before I leave. Afghans are not easy to turn down.

A few shops further along, Jawid Hussein, 27, is sitting behind his counter. The burly Hazara laughs when I ask what he wishes for the New Year. "That the foreigners will finally disappear from our country!" His eyes betray a penchant for joking around. He will celebrate Nouruz at a restaurant with friends, with good drinks. What kind of drinks, he doesn't say. Worried about security, Jawid Hussein will not attend the big ceremony at the shrine. He goes there every week anyway. 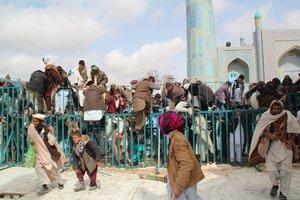 The closer, the better: prayers before the mast

​​Of the country's four ethnic groups, the Hazara have suffered most under the Taliban. Their persecution had both an ethnic and a religious component. As ethnic group and as Shias they were disdained by the Sunni Taliban, and tens of thousands lost their lives as a result.

To call Mazar-i-Sharif a beautiful town would be false flattery. The rainfall of the past days has turned the otherwise dusty streets into mud. Anyone who doesn't watch out while stepping from stone to stone is liable to sink knee-deep in the mire. For Nouruz, hundreds of men with shovels and wheelbarrows arrive. They manually remove the dark brown layer of muck. At the big roundabout at the entry to Shah Massud Street, the city has hung up brightly coloured banners for the New Year's festivities. If the weather doesn't cooperate, guests can at least enjoy decorations in spring colours.

Mazar-i-Sharif's pearl, the Blue Mosque, is the centre for the Nouruz celebrations each year. Popular belief has it that this is the burial place of the son-in-law of the Prophet Mohammed, Ali ibn Talib. On the first day of the New Year, a flag mast is erected before the holy tomb (Mazar-i-Sharif actually means "Tomb of the Exalted"). If the flag raising goes smoothly, without any bucking or jerking, the year will go well. And if not?

On the morning of the ceremony, thousands of onlookers press up against the grate blocking off the inner courtyard of the mosque, as if in a cage. Everyone wants to get a look at the flag mast when the time comes. The trees all around are covered with spectators. Because of the cold weather, there are fewer than last year, people say. Many of them are wrapped in blankets and wearing turbans or pakuls. These flat wool hats were popularised by Shah Massud, the great war hero and anti-Taliban fighter. The "Lion of Panjshir", a province in eastern Afghanistan, always wore his pakul at a rakish tilt. 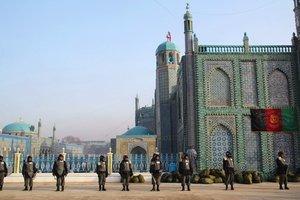 ​​Ever since his murder at the hands of the Taliban, two days before 9/11, he has been a legend, revered particularly in the northern provinces. Some of the onlookers hold up placards showing portraits of the martyr. Underneath, written in Dari, is a quote from the idol, not exactly an encouraging one: "The people of the world should be aware that the danger of terrorism is greater than they think." The placards were apparently distributed by the organisers. There are also pictures of Hamid Karzai, but far fewer.

After a long wait, it's finally time. The air trembles as cannons boom, sending the shrine's doves fluttering up into the sky. Helicopters drop colourful flyers down on the crowd. A good dozen mullahs pull the mast up with a rope. The brightly coloured flags adorned with Koran lettering unfurl as the masses cheer. The flag raising has gone off without a hitch.

The waiting crowd breathes a sigh of relief. As if by command, people now start climbing over the barriers and rushing toward the mast. Young and old gather all their strength to pull themselves up the fence. Boys sprint across the marble floor; old folks take a bit longer. In prayers below the mast they express their wishes – for themselves and for Afghanistan.

But what do the Afghans really wish for? I was unable to find out the answer from Hamidullah or Jawid Hussein. Beyond the checkpoints and military blockades set up by the Afghan security forces for Nouruz, I meet Gulam Nabi. "Peace and security are the main things. Our army did good work today," he says. Fears of an attack at the festivities have been allayed. How wonderful it would be if the mast could really guarantee a peaceful year 1391 in Afghanistan.

Home
Print
Newsletter
More on this topic
On Tour in Afghanistan, Part 1: On the Highway from Kabul to Mazar-i-SharifPhotojournalist Ursula Meissner: Afghanistan - Hope and Beauty in a War-torn Land
Related Topics
All Topics
Date:
Mail:
Send via mail

END_OF_DOCUMENT_TOKEN_TO_BE_REPLACED
Social media
and networks
Subscribe to our
newsletter