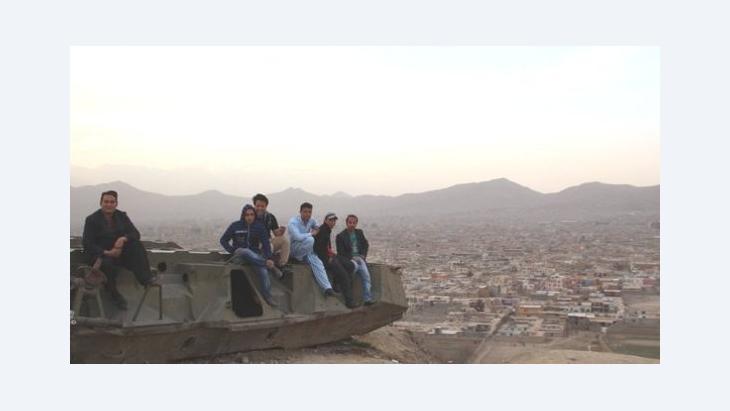 On Tour in Afghanistan, Part 3

A Walk through Kabul

Our author Marian Brehmer spent two weeks travelling through Afghanistan during the Persian calendar New Year. He spoke with people in Masar-i-Sharif and Kabul about things other than the war. What hopes do the people have for the coming year and how do they assess political developments in the country?

Where should one begin to discover this city? Its history and lore are practically thrust upon any visitor. I walk down Darulaman Street in the direction of the city centre. A few kilometres to my back is the Darulaman Palace, which was built for the Afghani King Amanullah Khan. Fires under the Communists and rocket assaults during the civil war left the palace as a ghostly ruin.

Right in front of me at the entrance to the city centre looms the 2107 metre high Kohi Asmayi. On account of its many antenna masts, it is popularly known as "TV mountain". Since the fall of the Taliban, Afghanistan has experienced an unprecedented media boom.

Kabul is a city in flux. The long shadows of thirty years of violence and destruction are everywhere to be seen. Yet, Kabul is also a city that is finally learning to walk again after a long paralysis.

Taxis and mini-buses race by and throw up dust clouds in the face of pedestrians. In addition to security concerns, dust clouds are the main reason why most working Afghans – not to mention the hundreds of foreigners working here in Kabul for international organizations or the media – prefer to travel in closed vehicles for even short distances. 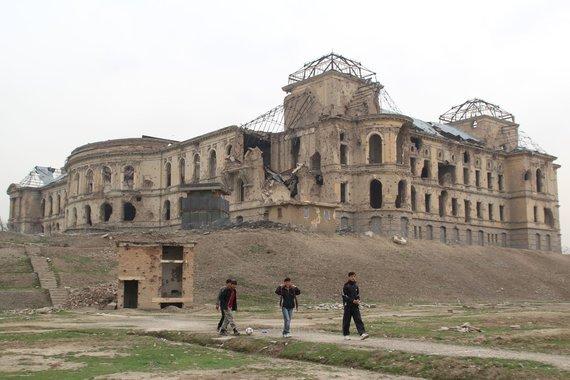 Shadows of the past: Darulaman Palace – completely bombed out during the civil war – offers a ghostly sight

​​At the end of Darulaman Street stands a building that at one time must have looked extravagant. Scarred with numerous bullet holes and craters, this was once the Soviet Cultural Centre, meant to propagate the Afghan-Russian friendship.

During the civil war, the building was occupied by Hazara fighters, while the warlords Shah Massud and Gulbuddin Hekmatyar fired rockets from both of the city's mountains. The years 1992 to 1996 resulted in the greatest losses for Kabul and the city was, for the most part, laid to waste.

I continue my walk to another location that experienced much suffering during the war – the Kabul Zoo. At the entrance, where foreigners are asked to pay double, there is a bronze statue of the lion Marjan. The lion was a present from the Cologne Zoo in 1978. From the murder of Mohammed Daoud Khan, the first President of Afghanistan, in 1978 until the fall of the Taliban in 2001, the animal survived the most momentous times in recent Afghan history.

Marjan was blinded in the mid-1990s when a soldier hurled a hand grenade at the creature. The man sought revenge for the death of his brother, who had died the previous day after climbing into the lion's cage on a dare. The lion succumbed to a natural death in 2002 and was declared by the world press as a symbol for Afghanistan's history of suffering. 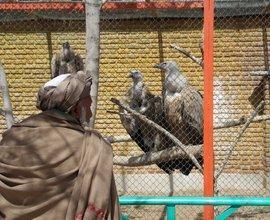 Tête-à-tête with the vultures: A Pashtun visitor to the zoo in Kabul

​​Marjan's successor, a present to the zoo from China, has been living through quieter times. The animal lies motionless in the sun, dosing on its back with all four paws outstretched. A few cages further I see a large brown bear taking a midday bath in a much too small enclosure. A man wearing a turban together with a woman covered by a burka stare spellbound through the bars of the cage.

Suddenly, the bear gets up, trots out of its bath and shakes off the water. The animal straightens up and rubs its rear dry against a post. The man in the turban furtively laughs into his beard. An enraptured crowd of wide-eyed children also follows the show.

Families are having picnics on the narrow patches of grass between the cages. At the wolf enclosure, some boys are trying to rouse the lethargic animals lying on the ground by throwing stones at them. There is a constant sound of screeching emanating from the other side of the zoo. The source of the noise is a colourful Ferris wheel and a swing boat, contributing to a fair-like atmosphere at the zoo.

Ten minutes by foot removed from the zoo, a middle-aged man waves to me to come closer. He is sitting in a tipped over wheelbarrow. He offers me a place to sit and sends off a young boy to get some tea. The boy disappears behind a row of metal workshops, where workers are busy hammering and welding. One of these workshops belongs to the man in the wheelbarrow. He introduces himself as Agha Bashir.

"From Germany?" calls out Agha Bashir, delighted. He lived there for six years. "When the Taliban came, that's when I left," he relates in Dari, while I make a concentrated effort to understand at least half of his detailed account. Agha Bashir worked in Stuttgart in a grocery store. This explains why the only words remaining in his German vocabulary are sheep's cheese, olives, and peppers.

Many of his relatives still live in southern Germany. "When the Taliban left, I came back," he says. Agha Bashir then starts to flail his arms about and makes an alarming forecast. He believes that after the departure of foreign troops from Afghanistan, the Taliban will return to Kabul. I ask if he plans to leave the country again in that case. He shrugs his shoulders with an "Inshallah". Karsai is corrupt, he says, and would lose his grip on the country without the help of foreigners. 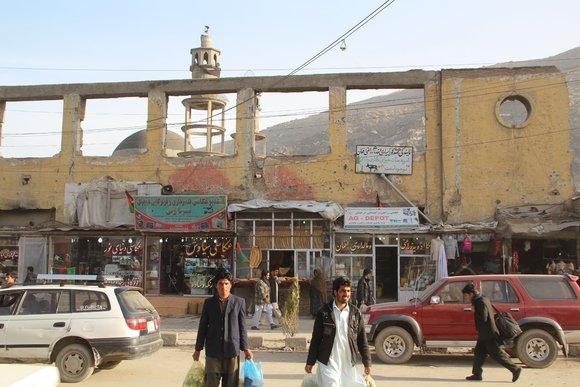 Return to normality: "The closer I get the city centre, the busier it gets. Life seems more normal than on the outskirts of the city. The Afghanistan 'up in flames' presented in the media couldn't be further away," observes Marian Brehmer

​​"Have you already eaten," says Agha Baschir, changing the topic and presses a 50 Afghani bill in the hand of the boy. A short time later, I am once again on my way with my belly full of Iranian deserts and Agha Bashir's pessimism.

The closer I get the city centre, the busier it gets. Life seems more normal than on the outskirts of the city. The Afghanistan "up in flames" presented in the media couldn't be further away. Small grocery stores follow one after another like links on a chain and sell heavy sacks full of flour, rice, and hard candy. Soon, these stores make way for mobile telephone and electronics shops, which appear to have a steady stream of customers.

This is where I meet Aryan. The 24-year-old wears jeans and has gelled hair. His English is good and he attempts to speak with an American accent. "I work in Herat as a translator for the American military," says Aryan. Many well educated young Afghans have found work in recent years with foreign troops. These are jobs that will probably all be lost in 2014.

Aryan also has links to Germany. Some of his uncles live there. He has cousins in Germany that are the same age as himself. They were born in Germany and have never visited their parents' homeland. This summer, they want to come to Kabul for the first time, but are afraid. Aryan often talks to them by telephone. "Whenever a bomb attack is reported on television, they think that all hell has broken loose here. But there is also another side to things. Kabul is safe. We live here, after all!"

END_OF_DOCUMENT_TOKEN_TO_BE_REPLACED
Social media
and networks
Subscribe to our
newsletter