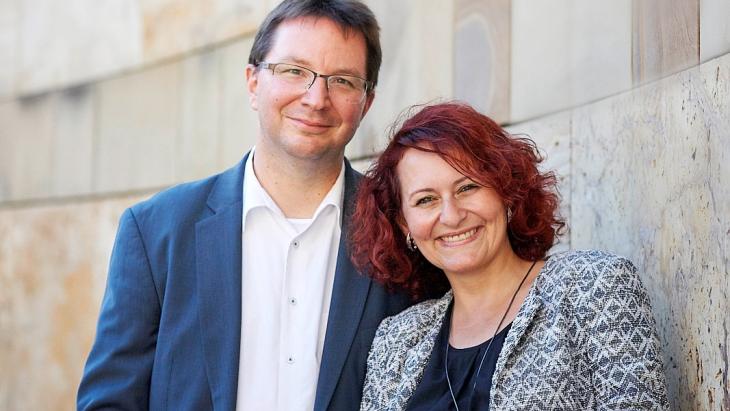 On Christmas Eve 2014 Michael Blume asked his wife Zehra whether he should help a thousand women and children, victims of IS violence, leave northern Iraq. After all, sheʹd been known to say yes to all kinds of questions in the past. Andreas Malessa recounts the story of their unusual relationship

"Hello. My name is Michael Blume. Is Zehra at home?" Outside the front door, a school friend of the Tayanc familyʹs eighteen-year-old daughter is clutching a rapidly wilting geranium. "Who is it?" Osman Tayanc calls from the living room. "Blume, Michael Blume," the young man repeats. He has never asked a Turkish father if he can go out with his daughter before.

"Iʹm in the Junge Union with Zehra. I wanted to ask . . ." Mrs Tayanc suppresses a laugh. Which is trembling more – the flower or its German namesake, Michael Blume? "Zehraʹs away on a school trip," she says. "But come on in." Michael gestures no, by this point holding the geranium over his head like an umbrella. "Iʹll go and find her. Bye!"

On 10 December 2018, a young woman received the Nobel Peace Prize in Oslo. Nadia Murad survived the Yazidi genocide by escaping from the IS terrorists. Now an internationally renowned human rights activist, Murad was one of around 1100 women and children Michael Blume was charged with bringing from northern Iraq to Germany on behalf of the regional government of Baden-Württemberg in 2015.

He and a team of psychotherapists, interpreters and civil servants made fifteen trips to the crisis area to enable a life in peace and safety for traumatised victims of sexual violence. 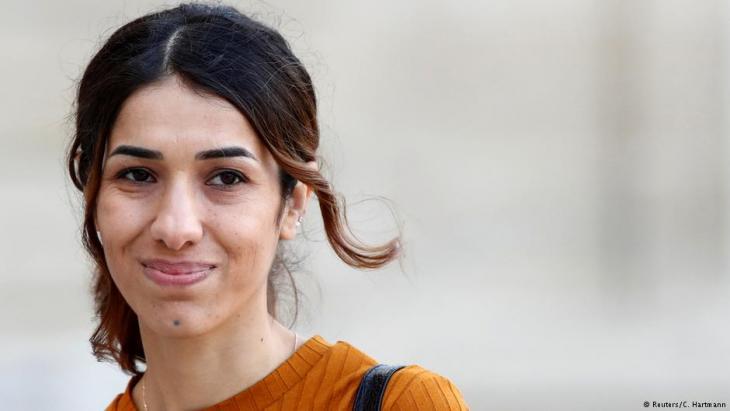 Nadia Murad belongs to the Yazidi religious minority in northern Iraq. Like many other Yazidi women, she was abducted and sexually abused by jihadists. Since her flight abroad she has campaigned for the rights of Yazidi women and the punishment of her tormentors. Last year she was awarded the Nobel Peace Prize together with the Congolese doctor Denis Mukwege. The now world-famous human rights activist was one of around 1,100 women and children whom Michael Blume brought to Germany from northern Iraq in 2015 on behalf of the Baden-Wurttemberg state government

A graduate in religious studies, he started his working life as a staid civil servant in Stuttgart. Michael Blume is not the kind of man who usually switches cars and licence plates under covering fire from Kurdish peshmerga troops and holds secret negotiations with clan heads in tent cities. His unlikely turn off the beaten career track has to do with his Muslim wife.

The two met in ethics class at school. Protestant religion classes were not an option for her as a Muslim or for him, the son of an atheist family. Michaelʹs father served a military prison term in East Germany for an alleged attempt to escape the country, while his mother had left as a dissident. Born in the West, their son Michael was to grow up free from all ideologies – including religion.

Looked after by true blue Swabians

Zehra had been looked after by the familyʹs neighbours from the age of three to eleven, while her parents were at work. "They were pious Swabians from the countryside who loved me more than anything," Zehra remembers. "And they prayed before every meal: ʹCome, Lord Jesus, be our guest.ʹ My childminderʹs favourite recipe was pork – spare ribs. ʹZehra, youʹre not allowed to eat them, are you?ʹ sheʹd say, and sometimes Iʹd stick to the rules and sometimes I wouldnʹt."

Some locals in the village whispered about how they could take in a "random Turkish kid". That kind of thing would enrage Zehraʹs childminder: "God knows everything, only the neighbours know more. But thereʹs only one Father in heaven, isnʹt there?!" It was the 1980s. Popular opinion had not yet been poisoned by populists transforming cultural disconcertment into hate.

Home
Print
Newsletter
More on this topic
Interfaith partnerships in Germany: Cultural diversity as an enrichmentMuslims and inter-religious marriages: Negotiating religion and social identityInterview with a mixed-faith couple: Experiences in a Christian-Muslim marriage
Related Topics
'Islamic State' | IS, Christianity, Dialogue of Religions, Islam in Germany, Migration in Germany, Minorities in the Muslim world, Places of Dialogue, Refugees, Yazidi
All Topics

Education for girls and women is still possible in Afghanistan, says Reinhard Eroes of the Kinderhilfe Afghanistan initiative. In interview with Elisa Rheinheimer, he talks about ... END_OF_DOCUMENT_TOKEN_TO_BE_REPLACED

We are in favour of human rights. But One Love armbands are self-righteous and ignore some fundamental issues. Stefan Buchen examines the debate surrounding the World Cup in Qatar END_OF_DOCUMENT_TOKEN_TO_BE_REPLACED

In Doha, Arabs from Morocco, Tunisia, Egypt and Algeria are gathering to celebrate the first ever FIFA World Cup to be held on Arab soil. The criticism from Europe? Over the top, ... END_OF_DOCUMENT_TOKEN_TO_BE_REPLACED

Canan Topcu came from Turkey to Germany as a child. In her essay, she describes how bothered she was by the racism she encountered in her country of origin when she travelled ... END_OF_DOCUMENT_TOKEN_TO_BE_REPLACED

All organisers use major sporting events like this year’s FIFA World Cup in Qatar primarily to advertise their country and promote a slick public image. This is not something we ... END_OF_DOCUMENT_TOKEN_TO_BE_REPLACED

A leading light of Israeli theatre, Ofir Henig has directed the Israel Festival and is the only female director to have been awarded the Israel Theatre Prize. These days, however ... END_OF_DOCUMENT_TOKEN_TO_BE_REPLACED
Author:
Andreas Malessa
Date:
Mail:
Send via mail

END_OF_DOCUMENT_TOKEN_TO_BE_REPLACED
Social media
and networks
Subscribe to our
newsletter