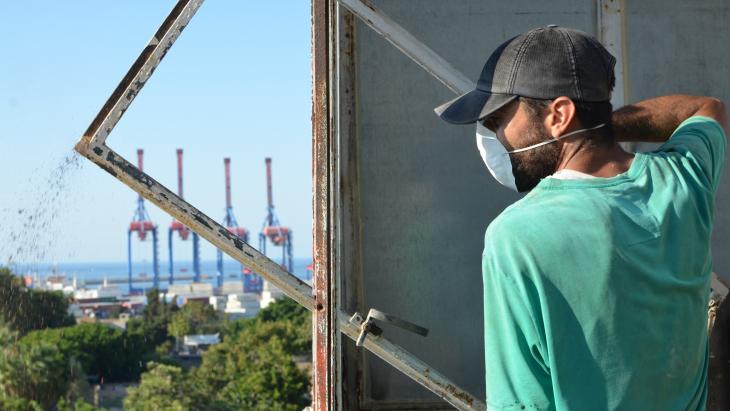 You can see the port of Beirut from Mounir al-Khodr's roof terrace. His family's home, belongings and memories were damaged in the explosion. Julia Neumann reports from Beirut on what life has been like for him and his family since the catastrophic events of 4 August

"All the walls were full of art," Houda al-Khodr says proudly as we walk around her apartment. In the bathroom, three light blue tiles have fallen off and the wall leans towards the bathtub. The mirror in the bedroom is shattered and the wardrobe covered in notches. The bedroom door doesn't close any more; the doorframe is broken. The sofa has been slashed by shards of glass, as have the curtains and a wooden cupboard that her husband, Mounir, made by hand. The shards also left holes in the amateur artist's oil paintings. And the damage has destroyed the family's memories of their beautiful home.

On 4 August, 2,750 tonnes of ammonium nitrate exploded in the port of the Lebanese capital, Beirut. 190 people were killed, around 6,000 were injured, and almost 300,000 lost their homes. At the port, there is a gaping crater measuring 200 metres across; the detonation also obliterated supplies of food and medicines in the surrounding warehouses.

The shredded walls of the grain silos are no more than 900 metres from the al-Khodrs' house as the crow flies. You can see the blue and red cranes through a large hole in the living room wall. 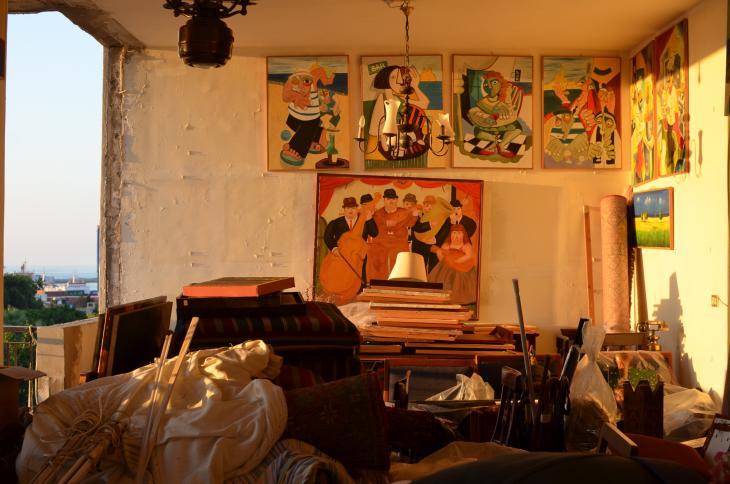 Trade in aluminium and glass is booming

A month on from the explosion, many of the 40,000 or so damaged buildings still don't have new windows. Sales of aluminium and glass are booming, and prices are rising due to high demand. The catastrophe has hit the country in the middle of its worst economic crisis. Tens of thousands of people have lost their jobs, and the local currency has lost 80 per cent of its value. That means the Khodrs can't afford to replace their broken windows and doors, which is the minimum that needs to be done. "My home is more than just glass and aluminium," Houda al-Kohdr says angrily.

In the morning, Sarah Taleb rings the doorbell. The 28-year-old has brought paint pots and a scraper. The cost of repainting the apartment is 600,000 Lebanese pounds, just over 100 dollars. Taleb collected the money through Facebook. On Monday, she starts by scraping the cracked paint off the walls.

"It isn't just a selfless thing, to be there for people and help them," Taleb says. "If you don't help your dying neighbour, no one else will. You feel privileged to still be alive."

Over the next few days, she plugs the holes with filler. "If you are paying a single pound out of your own pocket, I won't take up your offer," 64-year-old Mounir al-Khodr says seriously. "I'm not a beggar, you know?"

The husband and father gives Sarah Taleb a kiss on the cheek. She talks about how she went around the neighbourhood a few days earlier, asking what families needed. When she promised to come back and paint, Mounir al-Khodr, who owns the building, replied: "If you do that, I will kiss your backside." They both laugh as they tell the story. "I'm laughing, but really I'm sad," al-Khodr says. "I can't sleep at night."

Beirut has been destroyed before 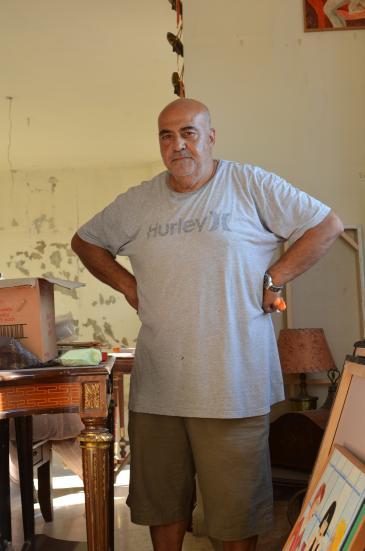 Mounir al-Khodr in his damaged flat in Beirut. "Resilience be damned!" says Sarah Taleb, who is helping the family redecorate the flat. "We've got so used to trauma that we just sweep it under the carpet and carry on. But we're not resilient. We just always go back to thinking: as long as there isn't a war, we're fine."

It is the first time Mounir al-Khodr has had to rely on others for help. But his home has been damaged plenty of times before. He knocks on a wall in the living room and a few fragments fall off; there is clearly a hole there. "Look, this is where a bomb hit. How often have I repaired this building! There are over 60 marks on it from shells and bullets."

Beirut has died a thousand times, and a thousand times it has risen again. You can see the mantra of resilience on large posters all over the city. The civil war from 1975 to 1990; 21 politicians assassinated; the war with Israel in 2006 – Beirut falls and comes back stronger. It's a myth that covers up the fact that corrupt politicians and businessmen go unpunished in all of this.

"Resilience be damned!" says Sarah Taleb. "We've got so used to trauma that we just sweep it under the carpet and carry on. But we're not resilient. We just always go back to thinking: as long as there isn't a war, we're fine."

Only 30 per cent of the damage is insured

The couple's son, Hadi, rings the bell before lunch. The 33-year-old has been at work; he sells American medicinal products for a Lebanese firm. "I spend my free time repairing the house," he says. "My car was damaged: the windshield was shattered and the roof was broken. It will cost US$1,600 to repair."

The damage caused by the explosion runs to an estimated US$10 to 15 billion. Only 30 per cent of it is insured, according to the insurance companies. They are waiting for the cause of the explosion to be established so that they can judge whether their policies should pay out or not.

The detonation seems to have been an accident, but the investigation has stalled. Almost a month on from the explosion, there is still no information about the precise sequence of events. And political life has stalled, too: the Lebanese parliament is in recess and the government has stepped down. The new prime minister, Mustapha Adib, is still trying to form a cabinet.

"The government? There's been no sign of them here yet," says 33-year-old Hadi al-Khodr. He is more resigned than angry. "If you need something, you have to go to the religious leaders. The government certainly isn't going to help you." 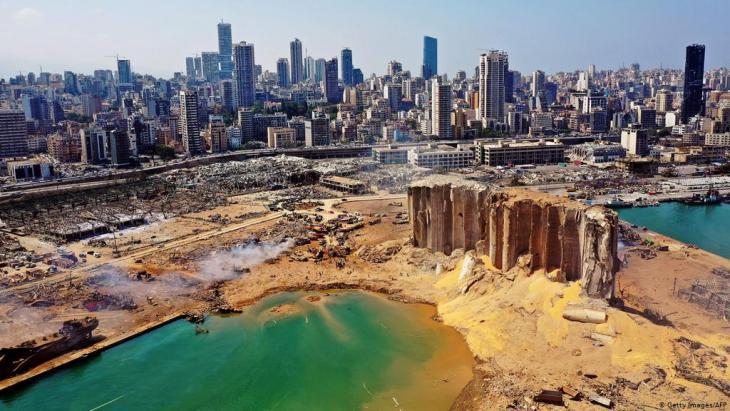 On 4 August, a fire triggered a catastrophic explosion in a warehouse storing 2,700 tons of ammonium nitrate. More than 190 people were killed and some 6,000 wounded in the blast, which left around 300,000 people homeless. The exact circumstances of the blast are still under investigation. The explosion came as Lebanon battles both its worst economic crisis since the end of a 15-year civil war in 1990 and the coronavirus pandemic. There have been three other fires in the locality since then, causing worry and panic among local residents

Fear of being driven out

In 1990, after 15 years of civil war, the reconstruction of Beirut was a goldmine for government officials and their allies. Contracts were given to friends, aid money vanished, and patronage networks blossomed.

Hadi al-Khodr fears that it will be the same this time too, namely that the reconstruction that lies ahead will only benefit the rich. "Along with all the people who came wanting to help us, there were also those who just wanted to make a profit. They asked if I would sell them the aluminium or my car dirt cheap."

For a long time, the quarter where the Khodrs live was called the Khodr neighbourhood, but now this part of town is also known as "Karantina". Since the 1960s, Karantina has been home to an impoverished class of workers who were pushed out by a changing industry. Politics fostered this suppression, Hadi al-Khodr tells me: "They put all the things that stink here: waste disposal, the fish market, a slaughterhouse. Stink, stink, stink. They're trying to drive people out." He thinks the politicians want to get their hands on well-positioned plots of land close to the port.

A high-pitched tone: it's the doorbell again. A 26-year-old engineer, Zuhair Hashem, is wearing a white helmet and comes from the Beirut Association for Social Development. "We help people so that they can carry on sleeping in their houses, and don't have to leave." Hashem enters the size of the apartment in square metres into a table, measures the holes for windows and the size of the doorframes. "Tomorrow we're going to repair every single door and every wall," he promises.

"So many organisations have come and taken measurements, taken pictures," Houda al-Khodr says when Hashem has left. "One from Norway, one from the Emirates, one from... I don't even know where!" "From Bangladesh and Kurdistan," her husband jokes. "Now he's just exaggerating," their son Hadi shoots back, and both men laugh. But no one knows who will actually carry out the repairs in the end. "Who can we really believe?" Hadi says.

They’ve already got the Louvre; they’ll soon have a Guggenheim Museum as well – and now the Emirates have added literature to their quest for cultural supremacy in the Arab world ... END_OF_DOCUMENT_TOKEN_TO_BE_REPLACED

The rollout of coronavirus vaccines in the Middle East and North Africa is already taking place on a massive scale, with the United Arab Emirates leading the way. Nevertheless, ... END_OF_DOCUMENT_TOKEN_TO_BE_REPLACED

A childhood and youth in Beirut, a life lived between Lebanon, Switzerland and Germany, and a unique voice in Arabic-language literature: "Beirut für wilde Mädchen" sees Lebanese ... END_OF_DOCUMENT_TOKEN_TO_BE_REPLACED

Surging coronavirus cases in many parts of the world have overshadowed the start of this year's Muslim holy month of Ramadan, with festivities once again curtailed by contagion ... END_OF_DOCUMENT_TOKEN_TO_BE_REPLACED

German Middle East analyst Guido Steinberg and television journalist Ulrich Tilgner have both published new books on the conflicts in the Middle East. Their analyses and their ... END_OF_DOCUMENT_TOKEN_TO_BE_REPLACED
Author:
Julia Neumann
Date:
Mail:
Send via mail

END_OF_DOCUMENT_TOKEN_TO_BE_REPLACED
Social media
and networks
Subscribe to our
newsletter