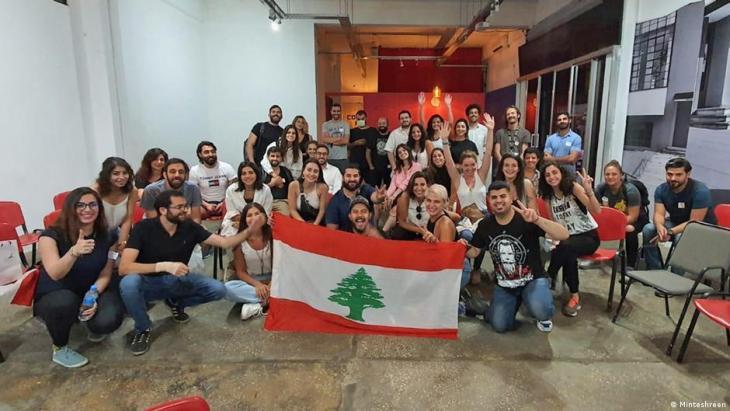 The young activists from the Minteshreen movement want to provide an alternative to the political corruption of the elites. For them, the state is more important than religion. By Sina Schweikle in Beirut

A group of young people are relaxing in front of a building in Beirut's Mar Mikhael district. As some pause for a smoke, they discuss the political situation in their country. "The politicians take everything from us and stick it in their own pockets! We have to do it differently," one says.

It's Thursday, which means it's the weekly open day for Minteshreen, a progressive youth-led movement born of the late 2019 protests. The group's name translates roughly to "spread out".

Nearly two years ago, when hundreds of thousands of Lebanese people took to the streets to protest against the country's corrupt elite, Hussein el-Achi, 33, and his friend Samer Makarem, 30, a marketing expert were among them. Today, el-Achi and Makarem are leaders in the movement. They want their ideas and vision for a better future to spread out across the whole country, and with about 100 members, they are hoping to set up an independent political party.

"We are hungry for change!" says el-Achi, the group's secretary general, excitedly. Makarem, a bit calmer, agrees. "We know that the change won't come from one day to the next, but we are driving it forward," he says. 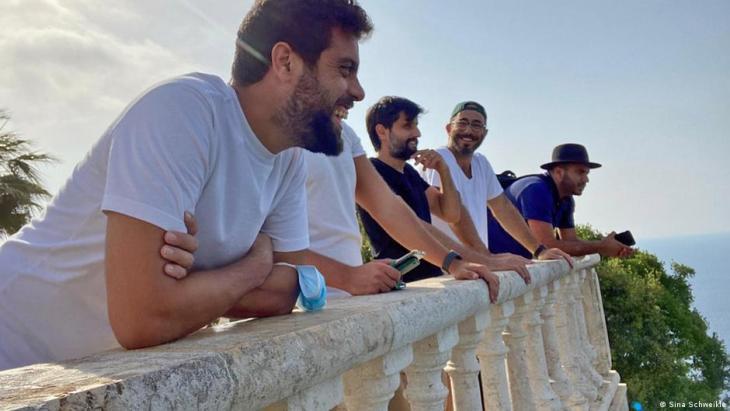 Minteshreen is a progressive youth-led movement born of the late 2019 protests in Lebanon. The group's name roughly translates as "spread out". Samer Makarem, 30, is a marketing expert: "I am Lebanese," he says. "This is not defined by my religion but by the place I was born. We are all Lebanese. It's a connection to the state and not to religion". Pictured here: four members of the Minteshreen movement

Providing help after the Beirut blast

Minteshreen joined up with several NGOs to create what they called Basecamp in Mar Mikhael after the Beirut blast of 4 August 2020. More than 200 people were killed and thousands were left homeless when 2,750 tons of ammonium nitrate stored in the port exploded, destroying large parts of the city's eastern district.

"That's where we took on all the tasks that the state should usually carry out after such a disaster," explains el-Achi. They provided food and psychological support to those in need and helped to renovate buildings.

A few days later, they decided to register as a political party – but they have been met with resistance. "Again and again, we are called in by the security forces and questioned for hours. They put obstacles in our way," says el-Achi. "The established parties are afraid of us, but we are not afraid of them!"

Minteshreen aims to be different

Some of the young activists have accused the politicians in power of being war criminals going back to the 1975–1990 civil war. Many young people feel that they have been abandoned. But el-Achi vows that Minteshreen will be a different kind of political party.

"Look around you," he says. "There are young people from all the religious communities here. Samer is a Druze, for example. Maroun is Christian. I am Shia. We all have the same goal: state instead of religion!" To achieve this goal, they have focused on political education and building alliances with partners with similar ideals and principles. With town hall debates, they hope to help young people to build a political conscience.

Nicola, an independent activist involved in projects that promote community cohesion in Hamat, a city about 50 kilometres (30 miles) north of Beirut, is a potential partner. And Makarem thinks that the country's future lies in such cooperation. "I am Lebanese. This is not defined by my religion but by the place I was born. We are all Lebanese. It's a connection to the state and not to religion," he says. 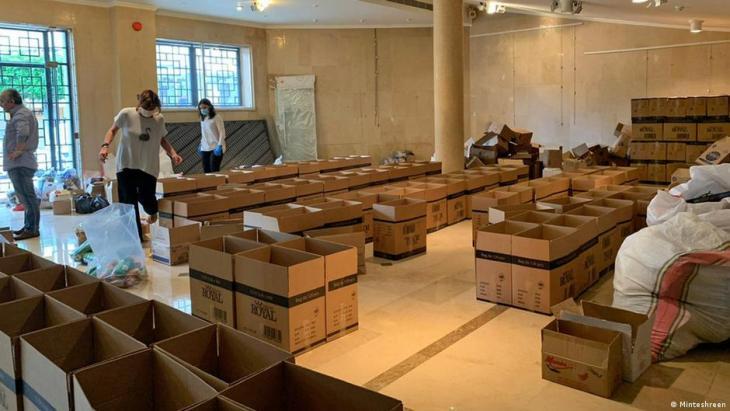 Serving the people of the country they love: after the Beirut blast of 4 August 2020, Minteshreen joined forces with several NGOs to create what they called Basecamp in Mar Mikhael. More than 200 people had been killed and thousands were left homeless in the blast.The NGOs rolled up their sleeves, provided food and psychological support to those in need and helped to renovate buildings

"The most beautiful country in the world"

Their idea is to provide voters with an alternative in the 2022 election. "We face a new disaster every day," says Makarem sarcastically. "Our politicians are morally and politically bankrupt," adds el-Achi. "If we do not manage to develop a real democracy now as a country, we will never manage."

They choose to volunteer alongside their paid jobs and carry out tasks that the state should be responsible for, such as providing charity and food to families in need or helping to clean up the beaches after oil spills, because they want to improve a country that they love and have no desire to leave.

"Look around you! Is this not the most beautiful country in the world?" asks Makarem, breathing in the sea air and looking at the horizon.

He is optimistic that Lebanon, like Minteshreen, will find its identity. "We have to learn to identify as a state and to act as a state. We could achieve so much," he says.

Makarem and el-Achi know that it will take several generations for this development to take hold, but they are willing to put in the effort and time, with the support of their families. "This is the struggle for a better future," says el-Achi, whose wife is due to give birth to their first child in June.

Home
Print
Newsletter
More on this topic
Lebanon and COVID-19: Coronavirus lockdown weighs heavy on a country in crisisLebanon after the explosion: Beirut's aftermath – shattering as 15 years of civil warEmigrating from Lebanon: Traumatised Beirutis ready to "leave for good"One month after the Beirut port explosion: "We sweep trauma under the carpet and carry on"
Related Topics
Confessionalism, Democracy and civil society, Shia Islam | Shiite Muslims, Social movements, Youth culture
All Topics

Moncef Marzouki was Tunisia's first democratically elected president after the fall of dictator Ben Ali. Today he is the most prominent critic of increasingly counter- ... END_OF_DOCUMENT_TOKEN_TO_BE_REPLACED

Asef Bayat, professor of Sociology at the University of Illinois, Urbana-Champaign, has been studying revolutions and how they affect people since 1979. In his recent book, " ... END_OF_DOCUMENT_TOKEN_TO_BE_REPLACED

The 2020 Beirut port blast was a traumatic experience for many people in Lebanon. A large number sought therapy in the aftermath. But, with doctors leaving the country, help is ... END_OF_DOCUMENT_TOKEN_TO_BE_REPLACED

A pandemic, civil strife and an economic meltdown have conspired to bring Beirut's vibrant club scene to its knees. Yet the city needs parties more than ever. Kate Martyr reports END_OF_DOCUMENT_TOKEN_TO_BE_REPLACED

A group of 20 social media influencers in Lebanon is seeking to de-escalate political tensions and overcome sectarian problems. Their outreach is impressive among the young and ... END_OF_DOCUMENT_TOKEN_TO_BE_REPLACED

END_OF_DOCUMENT_TOKEN_TO_BE_REPLACED
Social media
and networks
Subscribe to our
newsletter