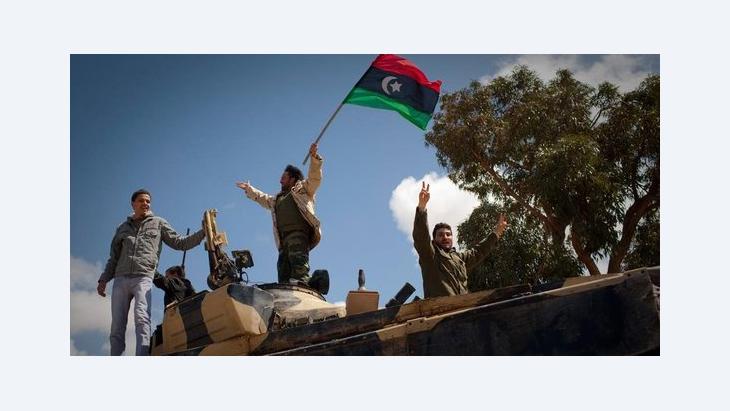 ﻿Life in Libya is currently determined by a confused mix of impenetrable power struggles, rebel chaos and unpaid debts of honour: Karim el-Gawhary has been in Tripoli

On what used to be called "Green Square," where Gaddafi held his final speech and which has now been renamed "Martyrs' Square," testosterone and heavy weapons make an explosive mixture. Hundreds of pick-up trucks with machineguns fixed on the back, and automobiles with men waving Kalashnikovs have joined up for a bizarre parade.

It's a wild mixture of Che Guevara, beards of the Prophet and shaved faces with military crew-cuts. Some of the men are lying on the barrels of the anti-aircraft guns mounted on their vehicles, turning them round like a carousel until they get dizzy.

The fighters were celebrating just a bit ahead of the first anniversary of the start of the revolt against Colonel Gaddafi on February 17th: the real anniversary wasn't until the following Friday.

For a journalist from outside, these parades don't radiate a feeling of security. But many passers-by stand at the side of the street and join in the celebration, adding to the enthusiasm with cries of "Allahu Akbar – God is great."

A fragile balance of power 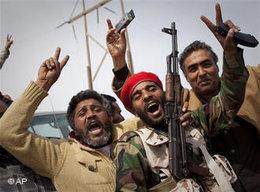 Firepower as trademark: many of the heavily armed rebels don't come from the capital, but from Sintan or Misrata

​​The parade continues in Omar Mukhtar Street a few hundred metres away; there's a toy shop in the street, and a family is hunting for something suitable for their child in among the pink tricycles and the shiny scooters, without even noticing the parade of weapons going by – that's daily life in Tripoli.

The ruling transitional council has banned firing into the air, but nobody takes any notice of that. They're firing out of all barrels, with their Kalashnikovs, even with the anti-aircraft guns. It's a clear message for the transitional council: many of the rebels don't come from Tripoli, but from Zintan or Misrata.

They're showing their military muscle, to underline the fact that the country's new rulers will have to take their interests into account as well. The balance of power in Libya is fragile, and it's partly based on who has the most firepower. Power in Libya these days is a limited commodity.

According to recent polls, in spite of the chaos, most Libyans are happy with the way things have gone since Gaddafi's overthrow – even if they are still worried that the old regime could return somehow. Its former supporters are keeping quiet if they haven't left the country. But every now and again they send some signal that they are still around.

A balloon filled with gas rises above the houses of Bab ben Ghashir, not far from the centre of Tripoli. It wouldn't be worth noticing, if it weren't for the fact that it's green, the colour of Gaddafi and his supporters. Is it just a joke, or is it a political statement?

"Sons of bitches," says our driver, who tends to the second opinion. He says that the revolutionaries will comb the area now. They are everywhere; they've set up roadblocks on all the big roads leading into the city. It's not that they want to check the vehicles; they just want to make sure their presence is felt. You never know, especially after Gaddafi's son Saadi just said in Niger that he wants to start an uprising against the former anti-Gaddafi rebels.

A new home in the ruins

Although the country is rich with oil, there is still poverty. And some of that poverty ends up in Bab El-Azaziya, a Gaddafi bastion in Tripoli, now almost totally destroyed. El-Hadi El-Shawesh is a rather unusual squatter. He's made his new home in the ruins, where Gaddafi's officer once lived behind their massive walls. 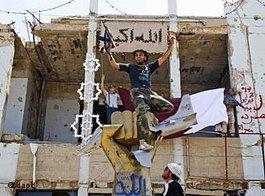 A new home for squatters and the homeless: the fortress-like military complex, Bab al-Assiya, was one of the main targets for NATO and the rebels who forced Gaddafi to withdraw last August

​​He's setting things up for his family of nine. He tells us he's just laid 400 metres of electric cable from outside. He hasn't got water for the kitchen yet, but he's already painted the walls, which were covered with soot from the fires.

"I can't afford to pay rent," he says, "with my salary from the hospital." He earns the equivalent of just 350 euros a month. All he needs is a roof over his head, water and electricity. "When the situation in the country is better," he hopes, "perhaps I'll get a house from the government." It is a bit strange to live in the heart of the old regime, especially when all kinds of thieves and riff-raff are wandering outside during the night. There are prostitutes too, looking for business in the post-war lunar landscape.

In a refugee camp on the edge of the city, surrounded by walls and fences, they have a different problem. The people who live in the barracks there come from Tawargha – a town known as the home of many of Gaddafi's henchmen, the ones who attacked the town of Misrata. They were notorious for the brutality with which they treated the rebels in the name of the regime. In the new Libya, they are treated like outlaws.

Gumaa Jera, one of these refugees in their own country, says, "The rebel militias are always attacking the camp and making random arrests. If we leave the camp we run the risk of being taken captive. They kidnap us and take us to an unknown place, sometimes to Misrata itself." Often, he says, you never hear anything more about those who leave the camp and do not return again.

An old lady, Manubia Saleh, joins Gumaa Jera. She pulls her scarf down low over her face. "It's a miserable life here," she complains. "You could cry. We're shut in here like prisoners. This isn't a life. If you go out of the camp, it's as if you're in occupied territory. And then they come in here, and just take what they want." 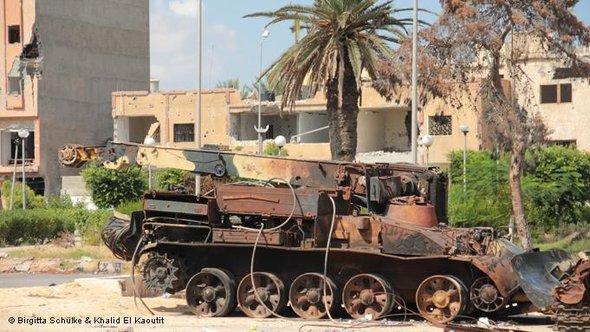 Pictures of destruction in Misrata: the uprising in Libya which broke out on February 17th last year soon turned into a bloody civil war. NATO joined in March, but it took until August before Tripoli could be taken by the rebels. Even then, the fighting continued until Gaddafi was finally hunted down and killed in his home-town, Sirte, on October 20th

​​A couple of kilometres from the camp, Aiman Machsoun is on patrol. He's one of the rebels from Misrata who has been integrated into the new army. When he hears the word 'Tawargha', his face is filled with anger. There's no chance of reconciliation with them: "They've set fire to buildings, raped and murdered," he says.

In need: justice and time

It will be hard to come to any kind of reconciliation with them – not in the next five years, for sure. Some of them even cut off the ears of the women, just to get their golden earrings. "But the rapes are the main thing," he adds. "That's a matter of honour. That didn't have anything to do with the war or the front. That wasn't random, that was a deliberate, systematic operation. Now the system of blood vengeance will have to take over."

His colleague Saleh says the solution is easy and difficult at the same time. It's difficult because it's a matter of honour, but it's easy, because the people of Tawargha just have to hand over those who were responsible, so that not everyone has to be punished.

Instead of there being a collective punishment for everyone from Tawargha, it's the courts which should really deal with the case. Those who murdered and raped should be punished, and the rest of the people should be found innocent and go free. But the courts, like everything else in Libya, are only now being set up. Moammar Gaddafi is dead, but the wounds that the war in Libya has opened are deep. Two things are needed to heal them: justice and time.

Translated from the Germany by Michael Lawton

The term "Tuareg" refers to tribes and nomads who speak dialects of Tuareg and live in Targa, an area in south-west Libya recently renamed Wadi Al-Hayat but previously known as ... END_OF_DOCUMENT_TOKEN_TO_BE_REPLACED

The Islamic Republic has been unable to quell the civil unrest that erupted three months ago, after Mahsa Amini died after being detained for violating hijab rules. Now the ... END_OF_DOCUMENT_TOKEN_TO_BE_REPLACED

Cries of "Benghazi!" still resonate across the USA ten years after a deadly terrorist attack in Libya killed the U.S. ambassador and three other Americans. Ethan Chorin re-tells ... END_OF_DOCUMENT_TOKEN_TO_BE_REPLACED

After a two-year hiatus, the Arab League re-convened at the beginning of November in Algiers against a backdrop of uncertainty and discord. By Pierre Boussel END_OF_DOCUMENT_TOKEN_TO_BE_REPLACED

In the run-up to the COP27 global climate summit, hosted by Egypt in November, it is worth noting that little rainfall, aggressive heatwaves and worsening drought make the Middle ... END_OF_DOCUMENT_TOKEN_TO_BE_REPLACED

The southern shores of the Mediterranean Sea are losing sand faster than almost anywhere else. The ecological and economic damage is immense. The good news is, there are ways to ... END_OF_DOCUMENT_TOKEN_TO_BE_REPLACED
Author:
Karim El-Gawhary
Date:
Mail:
Send via mail

END_OF_DOCUMENT_TOKEN_TO_BE_REPLACED
Social media
and networks
Subscribe to our
newsletter